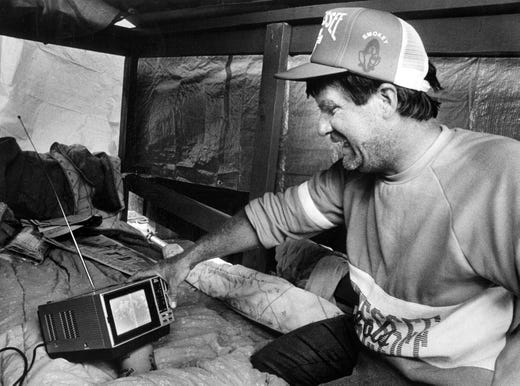 Duncan Stewart is a diehard Tennessee Volunteers fan. The former sports talk radio host and sports director of WSIX in Nashville has never shied away from his love of the football team, and he took that to another level back in 1988…literally. And now, he thinks someone should follow in his footsteps.

The 1988 season saw the Vols start 0-3, and that led to Stewart climbing up a billboard in downtown Nashville and announcing that he wouldn’t come down (other than for bathroom breaks and to do previously-scheduled promos) until Tennessee won a game. That wound up causing Stewart to be up there a total of 33 days after the Vols lost three more games, finally winning their seventh game on October 22.

In this 80s and 90s nostalgia craze, it seems like everything from those decades is being remade. And that’s the case with 2019’s Tennessee team, who is doing a pretty good impersonation of the 1988 team. Granted, the Volunteers defeated Chattanooga 45-0, but losses to Georgia State and BYU along with a 34-3 loss to Florida have left Vols fans angry and frustrated right now.

So how does Stewart’s 31-year-old billboard stunt tie into this? Well, Mike Organ of The Tennessean caught up with Stewart (who’s now a host on University of Nevada-Reno station KUNR, but who still follows the Vols from afar) to talk about his month of living on a billboard in 1998.. And Stewar said someone might need to do something similar again this year because he feels this Tennessee squad is even worse than the 1988 team.

“This team is worse than that team in 1988,” Stewart said. “This team’s horrible and quite frankly the coaching’s a lot worse. This guy (Jeremy Pruitt) doesn’t deserve to be mentioned in the same sentence with Johnny Majors (the coach in 1988). Jeremy Pruitt is not a good football coach. And I just feel so bad because the Vols fan base is one of the most loyal in the country.”

Stewart’s motivation for living on the billboard wasn’t some protest for change or anything. Stewart remarked that after seeing fans boo and throw cups at the players, he felt that somebody needed to endure similar hardship the team faced for losing. And he wound up chosen to do just that.

It also was great promotion for the station as Stewart conducted his radio show from up there. Only coming down for bathroom breaks and previously scheduled radio promotions, Stewart stayed up there for three more games and eventually came down after Tennessee defeated Memphis State. And he told Organ that “It was a great promotion and did exactly what we wanted it to do. It wouldn’t be a bad idea for a station in Nashville or Knoxville to do it again.”

Tennessee’s 1988 team started their season 0-6 but once they won, they won every game for the rest of the season, finishing 5-6. It remains to be seen what this Tennessee team can do, but Stewart’s story from 1988 is pretty fascinating. Especially of the time when Budweiser gave him an unlimited supply of Bud Light and he punctured his leg on the ladder to climb up on the billboard. Or of the time when he was heckled by fans from other schools, who even shot fireworks at him. If the billboard stunt is repeated after all (and hey, the idea hasn’t gone away, with ESPN having four fans live on a billboard ahead of the College Football Playoff last year), hopefully this one won’t come with those sorts of incidents.