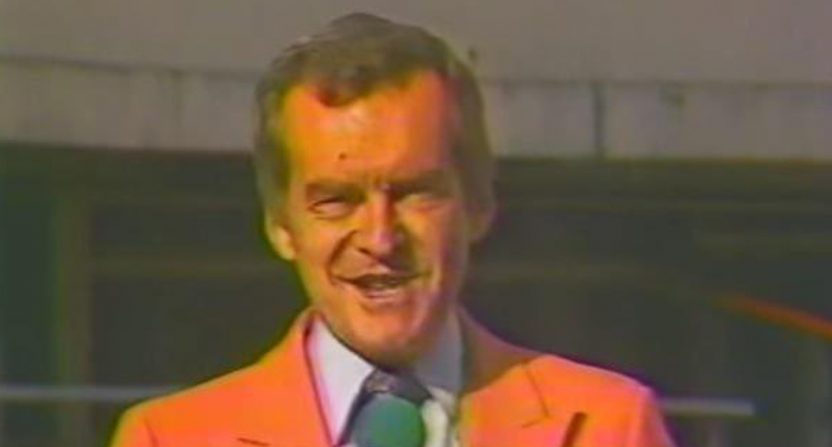 Former University of Tennessee Volunteers radio voice John Ward has passed away at the age of 87 following a lengthy battle with illness. Ward called 31 football seasons and 34 basketball seasons at the school, retiring from football duties after the Volunteers’ 1998 national championship and from basketball duties after the following season. IMG’s Vol Network announced his passing with a statement Wednesday:

Tennessee has lost its Voice. pic.twitter.com/ayqMRqH6wU

Ward was a consistent and vital presence around Tennessee athletics for decades, as ESPN’s Chris Low notes:

For parts of four decades, Ward was the radio liaison between the Vols and their rabid Big Orange Nation, and he captivated fans with his unmistakable crisp voice and signature calls — from “Give him six” after a Tennessee touchdown to “Bottom” when the Vols made a big shot in basketball. His final football season behind the microphone was Tennessee’s 1998 national championship campaign, and he retired for good following the ensuing basketball season.

Here’s a compilation of some of Ward’s most famed calls:

Media figures, athletes and fans all took to Twitter Wednesday to pay tribute to Ward:

RIP, John Ward. One of the finest voices in the history of American sports. A legend and a gentleman.

I remember when the ABC broadcast of Tennessee’s National Championship win over Florida State cut to John Ward for a series of plays.

The great Keith Jackson and ABC thought it appropriate to give John Ward the focus during his final call…a title game.

"It's FOOTBALL TIME in Tennessee!"

"The national champion IS CLAD IN BIG ORANGE!"

A real treat to visit his booth, his press box and on some fridays before games I called in Knoxville share a dinner and stories at Ye’ Old Steakhouse. We’re gonna miss ya John. pic.twitter.com/S1XzXN0eQr

No way to put into words what John Ward meant to so many. He painted a picture on the radio for Tennessee fans that made you feel as if you were sitting right there beside him. We've lost an icon. https://t.co/W36mek07L2

As I've said many times, other than my parents, few people inspired me more or touched me more profoundly than John Ward. I thank God that I had a chance to tell him as much in person when I visited with him back in March. He was truly a Tennessee treasure. https://t.co/bc3t4KEtgM

John Ward had a way with words. A prime example of that? When he announced his retirement. pic.twitter.com/8GxTFRqO0b

RIP to the legend John Ward. All of us have memories with him. I say "with" because he could make you feel like you were sitting in the room with him. Legend

John Ward has passed away.
“ Its football time in Tennessee”
Nobody will ever say it the way you did Sir
Rest in peace

My first TV reporting gig was a golf story for Big Orange Sunday, Tennessee’s spring sports show. I was a sophomore. John Ward was the host. When he said “For more, here’s Ryan McGee” I could have retired right there. Never did a kinder gentleman grace the booth. #givehimsix pic.twitter.com/bKIBopFJXZ

I lingered in the locker room after the Fiesta Bowl in 98 because it was John Ward’s final broadcast and I wanted to witness history. John wasn’t just the greatest to ever get behind a microphone; he was the voice of an entire state. May he Rest In Peace. https://t.co/tT1Y5xVWUe

Our thoughts are with Ward’s family and friends.