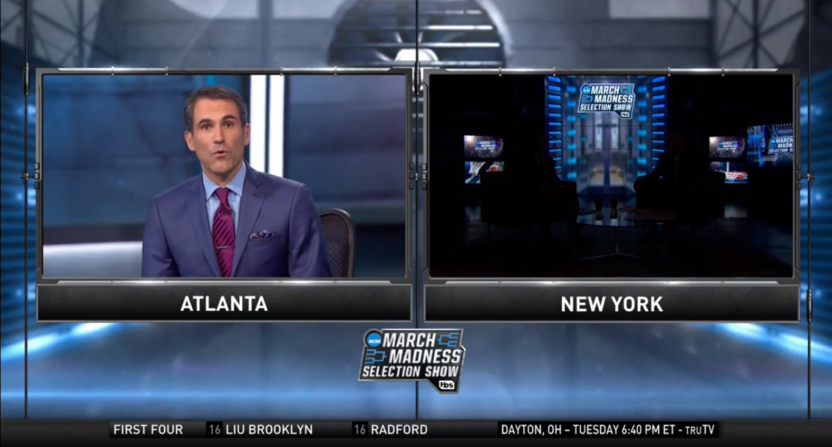 This year’s NCAA Tournament Selection Show has been a tough watch, and that’s a shame.

For a few years, you couldn’t get through March without being prompted to respond to a poll asking about your favorite part of the NCAA Tournament. The opening round (not the Opening Round, sorry Dayton) was always my answer, though plenty of people opted for the Sweet Sixteen or the Final Four. But my second choice was always Selection Sunday itself.

Everyone loves a bracket. Seeing it populated led to some inherent and variable drama, and at the end of the first half-hour of the show (give or take), we had the full bracket available for pool purposes. A few years ago, CBS tried to change things up by going to a two-hour broadcast, and it was a total disaster, with a complete bracket leaking to the Internet and saving the public from having to watch.

In 2017, CBS cut things down to 90 minutes, but the ratings were still bad. This year, the show was kicked over to TBS, and expanded back to two hours. Not only that, but the entire format was essentially changed; rather than revealing the brackets, Greg Gumbel and Ernie Johnson awkwardly traded off naming the automatic qualifiers in alphabetical order, then naming the at-large bids in alphabetical order, all from some kind of partitioned dystopia of a studio set. (Oh, and the audio/video sync was off for a decent portion of the opening.)

After that, the brackets were announced over the next thirty minutes. A representative example:

Also the lights literally went out at one point:

It’s honestly baffling to see how far the show is from delivering what people want, and then to listen to executives try to tell viewers that actually, no, this is what we want.

Here’s what made the show work for years and years: simple, quick drama, with information doled out in an organized and predictable way, followed by analysis. (No one’s ever really cared about that last part, but if there is a time they do care, it’s right when the bracket is freshly released and everyone wants to talk about it.)

The new format manages to give us all the same ingredients (which teams are in, which are out, and who they’re playing), and did so in just about the same amount of time (as promised), yet it feels completely different, and much worse. That’s because the how is as important as the what; if you give me a box of Chopped mystery ingredients, I can serve you a meal, but it’s not going to be nearly as good as someone who can actually cook.

The main drama of Selection Sunday is on the bubble, and this format kneecapped that particular angle. Revealing all of the at-large teams at once, in alphabetical order, tells you exactly when those bubble teams are going to be coming up. In the old format, that information was withheld, but importantly it was withheld in natural fashion; there was no artificial build-up to those reveals. We were just going through the brackets.

The brackets themselves are the other note of intrigue; who teams are playing and who they might play is kind of the entire point of the tournament. The 2018 format forced us to wait until we knew who was in, and then threw the information at us (for, essentially, the second time). Did they get the bracket out quickly? Sure. Is that the same as putting together an entertaining and informative show? Absolutely not.

That’s not to say that no experimentation should be encouraged. Streamlining around the edges, expanding the analysis, or putting more of a focus on just how inconsistent the committee’s rationale is would all be welcome. (To that end, Charles Barkley asking committee chair Bruce Rasmussen about Oklahoma was a highlight.)

But why reinvent the wheel to this degree? Taking something that pretty much everyone enjoyed, tinkering with it, seeing that people disliked the changes, and then tinkering with it even more doesn’t lead to a better product.

It leads to Ernie Johnson wandering around a virtual wasteland and everyone hoping the bracket leaks on Twitter again.