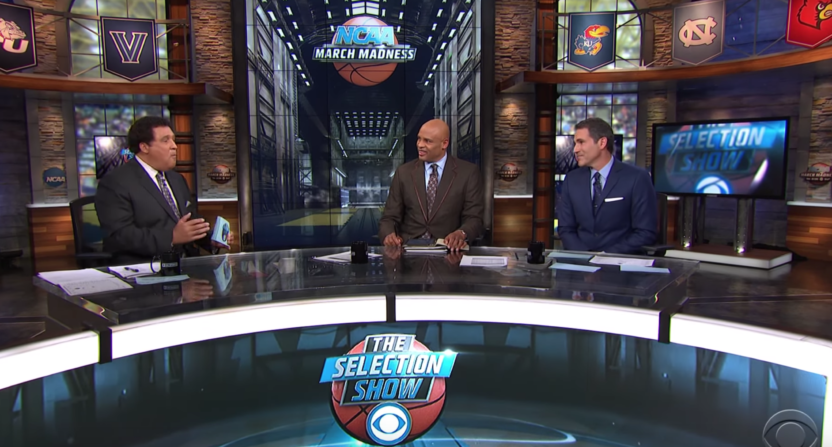 As part of the long-term agreement between CBS and Turner, TBS will broadcast the NCAA Tournament Selection Show for the very first time, Sunday at 6 p.m. eastern time.

The show will be mainly based in Atlanta for the first time, on a studio set custom built by Turner for the event.

“It probably equates to double the size of any other set that we’ve used for March Madness,” Craig Barry, Turner’s executive vice president of production and chief content officer, told Awful Announcing.

But the main difference between this year’s two-hour show and the last time a two-hour reveal was tried, with critically disastrous results, is that the 68 teams in the tournament will be released during the show’s first segment, without any commercial breaks in between.

As our Alex Putterman noted, fans are already seemingly unhappy with Tuesday’s announcement of the new Selection Show format.

“When people hear about doing something different,” Harold Bryant, CBS’s executive producer and senior vice president of production told Awful Announcing, “they’re worried about ‘oh, they’re going to stretch it out or not give us our information,’ but we’re giving the fans, giving the viewers the information in a very timely fashion.”

Also as part of the broadcast, Adam Zucker will be at CBS’s New York studio to talk with Selection Committee Chair Bruce Rasmussen after the bracket is announced. The second half of the broadcast will comprise of a whole lot of analysis from the Atlanta mega-studio and conversation with the tournament’s lead broadcast team of Jim Nantz, Bill Raftery, and Grant Hill, Bryant said.

Bryant said that everyone learned from the debacle of two years ago, when the revealing of field of 68 was stretched out for too long, causing a social media firestorm of sorts.

“Yes, we wanted to stretch it out and hopefully build a little bit more drama,” Bryant said of the most recent two-hour show. But now the audience wants things instantly, if not sooner. So this year, the information is going to get out there quickly so, Bryant said, “people aren’t going ‘oh my god’ and speculating.”

The key for the joint CBS-Turner tournament, Barry said, has always been to evolve and innovate all aspects of how it’s broadcast, beginning with moving the tournament to four different channels in 2011 and expanding to different online and social platforms.

Asked if there was concern that the audience would quickly drop after the full bracket was revealed within the first 45-60 minutes of the show, Bryant didn’t seem to think it would be a huge issue.

CBS and Turner have been supportive of this initiative to be more innovative and creative, Barry said, “as long as we’re being smart about it.”

Also for the first time, the bracket will be revealed in front of a live studio audience of about 300 people.

“It was filled within the first 15 minutes that we released the opportunity,” Barry said of the free tickets.

There will also be a four-hour long social show leading up to the Selection Show on Bleacher Report and its social channels on YouTube, Twitter, Facebook, and NCAA.com, with Davis, Andy Katz, Steve Smith, Brendan Haywood, and Casey Stern providing coverage.

That pre-show Barry said, will provide a double benefit for Turner and CBS.

“We did that because not only do we feel there’s an opportunity to be more experiential and engage a deeper audience,” Barry said, “but also to create an awareness for the move.”

If you watch the pre-show or go anywhere near B/R’s social on Sunday, Barry and Bryant hope you’ll know that the Selection Show will be on TBS, rather than CBS.

As for the FBI investigation that hangs like a dark cloud over every college hoops-related proceeding right now, Barry said that Turner and CBS will have it covered.

“There’s a bigger issue going on that needs to be addressed,” Barry said. “So we have to keep our eyes on the tournament. Of course, we’re journalists first, and if there’s a story that comes out and affects a team, a player, the tournament, we’ll be covering it.”