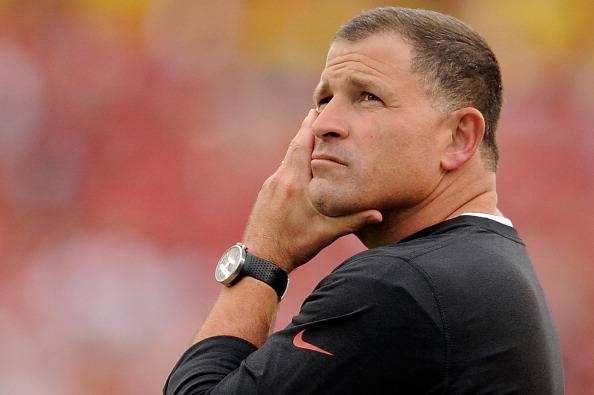 By now, you’ve probably heard about the craziest story about a coaching hire in college football history. Yes, this one even surpasses George O’Leary’s Notre Dame resume.

The University of Tennessee was all set to hire former Rutgers head coach and current Ohio State defensive coordinator Greg Schiano as their new head coach. Then, in the space of less than a day, a movement largely started on social media led to protests on campus, state lawmakers speaking out, and a tidal wave of outrage against the hire. The Tennessee athletic department then backed out of hiring Schiano after seeing the intense negative reaction, with the focus on Schiano’s time at Penn State and a link to the Jerry Sandusky trial, and now may have a legal response from Schiano coming for breaking an agreement with him.

Where do you even begin to try to make sense of what happened here?

In the fallout, there seems to be a polarizing opinion of Schiano’s abrupt time as the head coach at Tennessee. On one side, there are many in the media and the football world that think Schiano got the shaft. Their argument is that the Tennessee fanbase transformed into an unruly mob and only rejected the Schiano hire because they really wanted Jon Gruden. To justify this, they latched on to what is only a secondhand story that Schiano witnessed Jerry Sandusky’s actions at Penn State, a story he denies.

Yahoo’s Dan Wetzel is probably the best authority in sports media on the Sandusky case, covering it intensively for the last several years. He described Schiano’s link to Sandusky as “random, nonspecific (disputed) hearsay.”

On the other side are the Tennessee fans who don’t want anyone associated with Joe Paterno’s Penn State near their program. With Schiano’s name referenced in the Sandusky case and this Washington Post story with the headline “Greg Schiano, Tom Bradley knew of Jerry Sandusky abuse at Penn State, documents show,” making waves, it’s easy to see why things went south so quickly.

We are currently seeing a long overdue nationwide movement speaking out against sexual assault and sexual harassment. What happened at Penn State was a tragedy on an unconscionable scale. And if that’s a past association that fans don’t want as the face of their program, they are entitled to feeling that way. Tennessee has their own ugly recent history with sexual assault allegations to deal with as well.

Can both sides be in the right? As is usually the case, the truth lies somewhere in the middle. We’re never going to know exactly what Greg Schiano knew at Penn State. And we’re never going to know what percentage of the Tennessee fanbase had the best of intentions and what percentage was just upset about the school not hiring Jon Gruden. Wherever the truth is in this situation, it’s quite possible that neither side is completely in the right or wrong. And it’s quite possible that the cold-hearted reality is true that if Schiano simply had a better resume and reputation, none of this would have ever happened.

In a similar vein

It is possible to think that Greg Schiano got unfairly treated over the Penn State charges, which do not hold weight

think that Schiano still creates a terrible workplace environment for athletes, as seen in Tampa with the Bucs, making him Butch Jones 2.0

But there’s another thread at play here. What if the Schiano protests were less about the embattled coach and more about fans simply making their voices heard?

The power of social media has never been more prevalent in college athletics than it was yesterday. Tennessee fans effectively overruled their athletic department. It’s unprecedented.

Make no mistake about it: 10 years ago, Greg Schiano would be having his press conference to be introduced at Tennessee today. Sure, maybe there would be a couple message board threads denouncing his hire or a column in the Knoxville paper a day later, but it would be a blip on the radar. You definitely wouldn’t have protests on campus and politicians from Tennessee immediately commenting on it, though.

And yet, social media allows for all of that to happen, and in the blink of an eye as well. The most amazing thing is that Schiano was hired and then unceremoniously dumped in the span of hours. Not weeks. Not days. Hours.

Perhaps one takeaway that might get lost in this story is how social media can now empower a fanbase to speak out when they feel that their team/program/school isn’t acting in their best interests.

What the national media guys don't understand is that at the end of the day, this wasn't even really about Schiano, it was about UT fans finally forcing the school's admin to listen to them.

One Tennessee blogger wrote an article entitled, “The Day the Fans Took Back Tennessee” that captures the essence of this underlying current. At its core, the Schiano backlash was about Tennessee fans feeling as though the program has lost its way and gaining back some sense of ownership.

This protest is about the University’s continued disdain for the people who fund it with their taxes, who attend their games, who buy their merchandising, and who send their kids there to school.

This protest is about taking back a beloved Tennessee tradition for the fans, not the boosters.

This might just be the enduring lesson from Greg Schiano’s temporary tumultuous tenure as Tennessee head coach. Fanbases now have the tools to make their voices heard in the era of social media. It’s hard to say whether or not this could happen in professional leagues, but the passion of college football fans is a cauldron unlike anything else in sports. And if they can become as organized and as vociferous as Volunteers fans were on Sunday, they can effectively make change. It’s now been proven.

Given Sunday’s events in Knoxville, it’s hard to say we haven’t crossed a new frontier in college athletics. After seeing Tennessee fans basically overturn their own athletic department, fanbases will surely feel emboldened to act in similar fashion moving forward. If they’ll listen to the fans in Knoxville, why wouldn’t they listen in Ann Arbor or Tuscaloosa or Columbus or Eugene or any other major college town somewhere down the road? Maybe it won’t be as sensitive as Schiano and Penn State, but it will make fans feel more empowered from this day on.

Whether it’s fair to Greg Schiano or not will likely continue to be debated. But the one thing that won’t be debated is that athletic departments best take note of what happened in Knoxville because it could happen to them sometime soon.