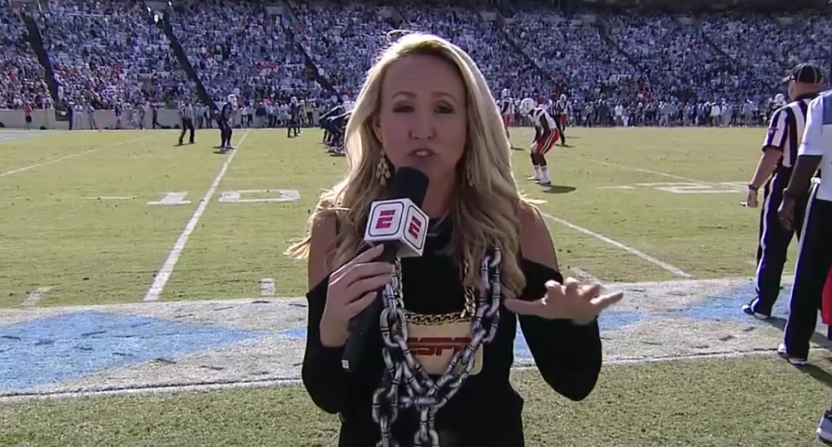 The Miami Hurricanes’ “Turnover Chain” has become quite the hit this year. The 36-inch, 2.5-kilogram, 10-karat gold chain, complete with stones in the Hurricanes’ gold and green colors, was created by Miami jeweler A.J. “The King Of Bling” Machado on a commission from Hurricanes’ defensive coordinator Manny Diaz and cornerbacks’ coach Mike Rumph, and it’s worn by Miami players on the sidelines whenever they force a turnover. It’s worked out just fine for them so far, as the Hurricanes have lived up to their preseason promise, starting the season 6-0 and ranking eighth nationally in both the AP and coaches’ polls heading into this weekend.

Miami fans in the stands have taken to wearing similar chains, with many even doing so on the road against the North Carolina Tar Heels Saturday. That led to sideline reporter Kris Budden bringing out chains of her own for the game’s broadcast on ESPN2. Here’s her original one, which she put on for a report about how the chain is stored during games, and her discussion of it with play-by-play announcer Jason Benetti (recently famed for his four-flight, three-game weekend) and analyst Kelly Stouffer:

“You go look at all the fans, they have all their own for Halloween, and I thought, ‘I want to be part of this.’ So I got my own. It’s an add-on chain, not a turnover chain.”

Soon after that, Benetti said “I think you should keep that on, maybe add some jewelry later in the game.” Stouffer later asked “What are you adding on, Kris, what are you going to add onto that thing?” Budden responded “It’s a surprise.”

And later in the game, she did bring out an even bigger chain during a report about UNC’s new lightweight jerseys:

Stouffer said “I don’t know how much jerseys are supposed to weigh, but I bet they don’t weigh as much as that bling around her neck. What is happening to her?” Benetti said “That’s the second piece of jewelry. I think we can officially, nicely, call her the Ice Queen now.”

They then threw back down to Budden, further discussed her chains.

“There were two turnovers, so you add a chain every time, right? I’ve got a whole bag of them. There’s more coming. Every time I do an add-on, I get a new chain. Isn’t that the thought? A.J. Machado actually made this one…nah, he didn’t.”

Budden’s chains may have been the best on-field performance in that game, though, as the Hurricanes’ 24-19 win was marred by tons of sloppy football on both sides. The chains were certainly a fun moment, and a way to add some color to the broadcast.