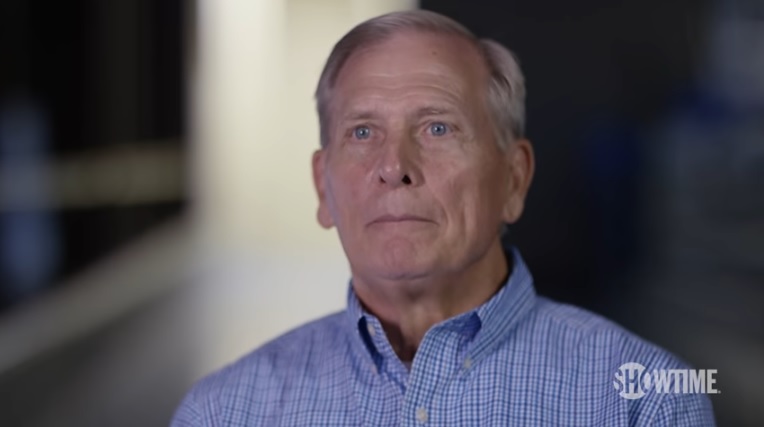 Showtime’s Disgraced documentary on the 2003 Baylor basketball scandal was perhaps most notable for landing an interview with former Bears’ head coach Dave Bliss, and it raised questions as to why Bliss was still coaching after being caught on tape telling his players to say murdered player Patrick Dennehy was a drug dealer in order to cover up illicit payments. (And also, why whistleblowing assistant coach Abar Rouse was never again offered a full-time coaching job.) Just a few days after Disgraced premiered Friday, Bliss is now no longer coaching, resigning from his job at NAIA school Southwestern Christian University (in Bethany, Oklahoma) Monday night:

Southwestern Christian University announced Monday that Dave Bliss will no longer serve the University as the Head of the Men’s Basketball program.

In a statement released today, University President Dr. Reggies Wenyika affirmed his commitment to seeking new leadership in a manner that is consistent with the University’s beliefs, standards and policies, as a duty to our Christian heritage of providing a values-driven education, and accountability to our stakeholders and the public good.

“I accepted Coach Bliss’ resignation earlier today and our prayers and wishes are with him as he transitions,” Dr. Wenyika said. “I have tasked a committee with commencing an immediate search and making a final recommendation for a new head coach to the Athletic Director and me.

“As president, I would like to reiterate the University’s commitment to ensuring the success of our student athletes on and off the field or court and look forward to the next participation season with new leadership in our men’s basketball program.”

Bliss had been the Southwestern Christian coach since 2015, following a controversial stint at Texas prep school Allen Academy (he was suspended from coaching basketball for two years less than a month after the season started). His time with the Eagles hadn’t made too many headlines, but it drew a lot of attention in the lead-up to this documentary, and even more so after Disgraced aired. In particular, Bliss’ decision to repeat his claims about Dennehy being a drug dealer drew major fire. Here’s what Mike Wise of The Undefeated wrote about Bliss’ appearance on the documentary:

In Disgraced, Bliss tries hard to tell a story of personal accountability and redemption, including at a Fellowship of Christian Athletes breakfast, where he hawks his new book and salvation.

Yet, just when the viewer begins to believe in his repentance, Bliss, believing he is off-camera — the filmmakers ironically did what Rouse did to him years earlier — incredibly doubles down on his claim that Dennehy sold drugs.

When he adds, “What I did was, I got in the mud with the pigs. I paid a price and the pigs liked it,” and follows it up with a cackling laugh, the creep factor in the film spikes.

It’s just the latest scandal for Bliss, as allegations of him paying players at SMU (where he was the head coach from 1980-88) surfaced during the Baylor investigation, and he was eventually hit with a 10-year show cause order by the NCAA in 2005. It’s hard to see a school continue to want to be associated with him, especially after this documentary and after his comments in it. When the revelation came out that Bliss had been interviewed for Disgraced, many were amazed, as it seemed likely he was never going to talk about the Baylor scandal again. He might have been better off not doing so.