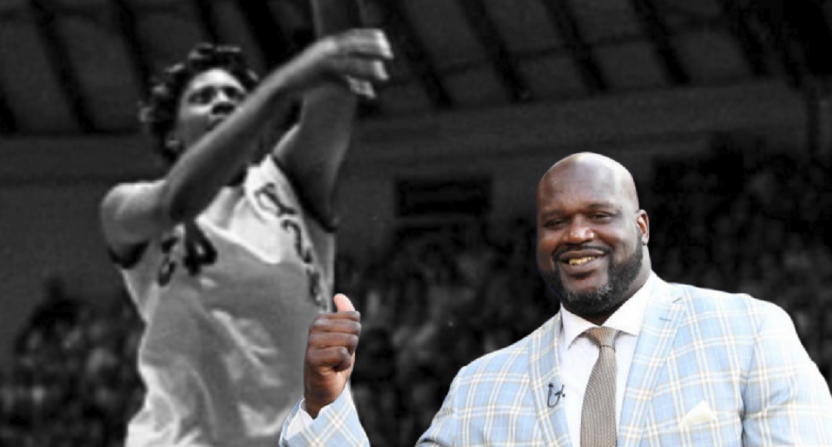 A documentary about Lusia “Lucy” Harris, the first female basketball player to be officially drafted by the NBA, just added a powerful ally.

Shaquille O’Neal is now an executive producer for The Queen of Basketball, a documentary short film from the New York Times chronicling the life and career of one of the greatest women basketball players in U.S. history, in addition to her struggles with mental health.

Harris won three national championships at Delta State in Mississippi, where she had to fund her schooling through academic scholarships and work study programs because athletic scholarships were not available to women in the early 1970s. She also won a silver medal at the 1976 Montreal Olympics, becoming the first woman to score a basket in Olympic history. Harris was eventually selected by the New Orleans Jazz in the seventh round of the 1977 NBA Draft, but opted not to try out for the team.

The Queen of Basketball originally premiered this past June at the Tribeca Film Festival, leading to Harris being featured by Robin Roberts on Good Morning America and interviewed by The Undefeated’s Kevin L. Clark.

After college, Harris didn’t believe the Jazz were sincere about giving her a chance to play. She also passed on an opportunity to play in France, preferring to stay close to home. She eventually played for the Houston Angels of the Women’s Basketball League (WBL) and later went into coaching. Harris was an assistant coach at Delta State before becoming the head coach at Texas Southern.

The film can currently be viewed at the New York Times website and on the NY Times‘ YouTube channel. (That means we can also embed the film below, if you choose to watch it here.)

But O’Neal’s involvement as executive producer should provide a push for the documentary to be picked up by a streaming platform, or a broadcast or cable network (TNT, perhaps?), and reach a wider audience than can view the film at its current outlets.

“We are thrilled that Mr. O’Neal sees the same fearless spirit and joy in Lucy’s story that made us want to share it with our devoted audience of Times viewers via Op-Docs,” said NY Times commissioning producer Lindsay Crouse. “His willingness to use his platform to boost her legacy will help ensure it is seen and celebrated by generations of ambitious young women to come—ensuring they know a pioneering woman in sport who helped forge the path.”