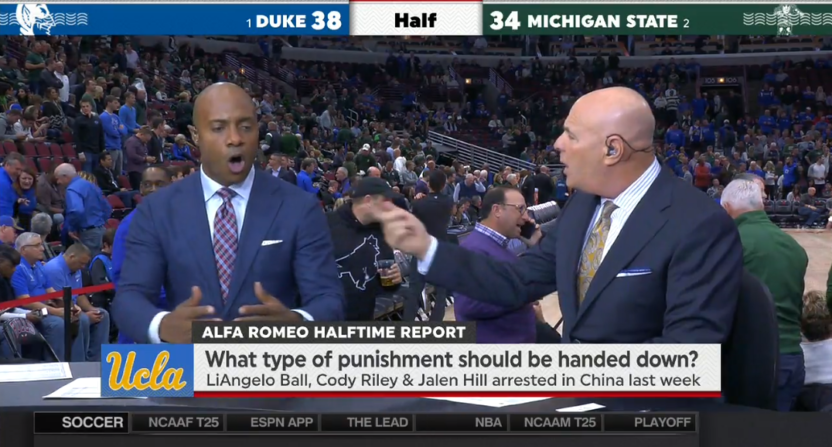 After LiAngelo Ball and UCLA Bruins teammates Cody Riley and Jalen Hill were charged with shoplifting on a preseason trip to China, detained after the team’s departure, and eventually released and sent back to the U.S. following the intervention of U.S. president Donald Trump, there’s been a lot of discussion about how UCLA should discipline them. Rece Davis brought the matter up on ESPN’s halftime show Tuesday during the Duke-Michigan State game, and while Jay Williams argued for a suspension for “a couple of games,” Seth Greenberg went in much harder:

Here’s the next part, where Greenberg argues for a year-long suspension (saying they should be able to practice with the team, but not play), and Williams is not having it:

“They should not be able to play this year! This is an embarrassment!” Greenberg says. Williams responds “This whole year? So when do we come back to this, Seth, about having teachable moments for our youth?” Greenberg responds “That’s a great teachable moment,” and Williams continues “They’ve just gotten shamed all over national TV.” Greenberg interrupts with something about campus, and Williams continues “Donald Trump is talking about it, fine, have a three-game suspension. I think they’ve learned their lesson from that.” Greenberg then says “Let me ask you this, personally, I think those kids if they were smart, would unplug and reboot somewhere else,” Williams interrupts with “No, stop that,” and Greenberg continues “Because every time they walk across campus, the rest of the semester…” The argument continues in this clip, with Greenberg ranting further and Williams looking away and smiling:

“This is a dark cloud over their heads,” Greenberg says. “That is an embarrassment to everyone involved! And let’s face it, let me ask you this, I’m sure they’re great kids, but they went to China, and they decided that was the first time they’re going to make a bad decision?” Williams then says “Everyone makes bad decisions in life, especially when they’re 17, 18 years old. I’m not excusing it, I’m not saying it’s right, but constantly, you take them out of school, you kick them off the team.”

It’s remarkable to see a halftime discussion get so heated, but that’s mostly thanks to Greenberg’s rant here. Proposing a year’s suspension and/or forcing the players to leave UCLA over this seems like a pretty massive punishment for the crime involved, and it’s understandable why Williams wasn’t a fan of his take. At the very least, though, this made for a memorable halftime show.