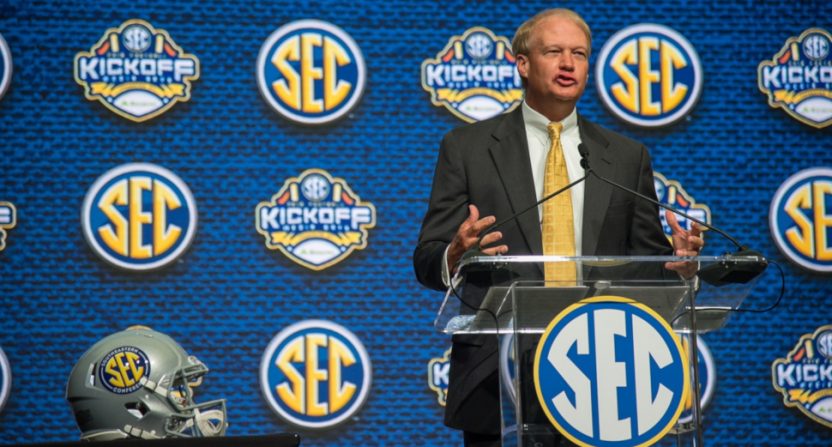 There’s always a substantial amount of criticism of officiating across leagues, but where leagues differ is in their responses to that. Some leagues, like the NBA and the NFL, have launched specific Twitter accounts to comment on officiating decisions and/or released reports on late-game calls, while others, like the NHL, have been providing video explanations on their website of why calls were made or why suspensions were handed out. There are also many leagues that let a pool reporter talk to officials after a game with a controversial call, and while it’s usually more of a broadcaster decision than a league decision, we’ve seen “rules analysts” pop up on broadcasts in the NFL, selected college football games, and even college basketball (where Gene Steratore proved extremely useful for CBS in this year’s Final Four). Now, it looks like the SEC wants to go to at least a rules Twitter account, and they also seem to want to encourage their broadcast partners to employ rules analysts. Sports Illustrated‘s Ross Dellenger has more on that:

The league is listening. The SEC is studying more and better ways to communicate with the public and media on officials’ fouls, so we all can understand the holding call that brought back a touchdown or the targeting flag that negated a third-down stop. The conference is making changes to a longstanding principle not just in the SEC but industry wide: We don’t comment on officiating.

“We’ve got to do something differently,” says Herb Vincent, an associate commissioner helping spearhead this movement. “We can’t keep doing what we’ve always done.” This goes beyond releasing more statements in response to controversial calls. Vincent and the league office are in discussions with networks about the possibility of having refs in the booth to provide real-time analysis and explanations on fouls, as NFL broadcasts use. This could come “sooner rather than later,” Vincent says. There are other measures coming, too, like a Twitter account specifically designed to post in-game commentary on close calls.

The Twitter account at least is something very doable for a league, and there’s some logic to it. Those Twitter accounts and comments there certainly haven’t stifled all the officiating criticism in other leagues, but they make it easy for a league to get out their official perspective, and having that official perspective out there seems better than not releasing it. Which fits with the comment SEC coordinator of football officials Steve Shaw (seen above at SEC Media Days in 2018) made to Dellenger that “I’m not sure we can live in a ‘no comment’ world anymore,” but also calls into question why Shaw told Dellenger “We actually build more responses than we actually release.”

The on-broadcast officiating expert may be a little trickier, especially from the league perspective. Whether an officiating expert is required or not usually seems to a decision made by networks. But rightsholders do want to work with leagues as much as possible in hopes of keeping their rights for the long term, and a SEC push here may help to get that done (perhaps especially for ESPN/ABC, where an officiating expert could presumably be keeping tabs on all their college football games and commenting on whichever one needs comment; it might be trickier for CBS, which usually has just the SEC game of the week, but they could maybe also use an officiating expert on CBS Sports Network games). And if Vincent is saying publicly this could come “sooner rather than later,” it does seem likely it will happen.

Moreover, conference coaches and athletic directors seem quite eager to have rules-educated experts on broadcasts. Alabama coach Nick Saban told Dellenger “If we could find the right person to do that, an expert who nobody thought had bias, who could explain these things while they happen, I think it would go a long way in at least starting the chain of communication.” And LSU AD Scott Woodward added “Some of our commentators blow it the worst.”

An interesting lack of progress here comes on the pool reporter front, though. Dellenger writes that “The SEC has, at least for now, ruled out having a pool reporter conduct a postgame interview with the head referee, as the NFL does. The Big Ten sometimes uses this as well.” Maybe that’s to emphasize the conference perspective on rules rather than the individual referee’s perspective (for example, a rules Twitter account would be run out of the conference), but the league’s other comments here insist that their officials generally get it right. So why not let those officials speak up the way officials in other leagues can?

The pool reporter approach is highly sensible, meaning that officials only have to take questions from one reporter (and that reporter generally tries to be very fair and very non-antagonistic, considering that their responsibility is gathering quotes for everyone, not just their outlet) and meaning that every outlet covering the game can then put in the officials’ perspective on why a call was made or not made. Shaw recognizes that the SEC can’t live in a “no comment world,” so it’s curious that they still want their individual officials there.

Overall, though, it’s definitely notable that the SEC is not only considering changes in how they address officiating decisions and criticism of those decisions, but that they’re admitting how aware they are of the online criticism they sometimes take over calls. Of course, none of these moves would completely stifle that criticism, but it has appeared to be useful for other leagues to offer explanations of their calls, whether that’s through an educated expert employed by the broadcaster, an official tweet, statement or video from the league head office, or both. We’ll see how the SEC handles this going forward.