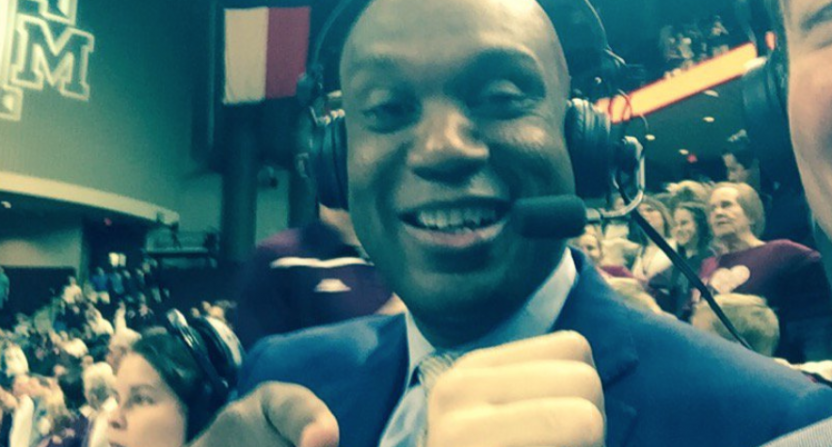 Comments made by SEC Network basketball analyst Barry Booker during Saturday’s Missouri-Arkansas telecast have been denounced by the network and SEC commissioner Greg Sankey.

“Go hang out with the ladies,” Booker said. “I mean, I wanna go see some scantily clad girls.”

Play-by-play broadcaster Richard Cross immediately interjected to shout down Booker’s remarks, saying women’s gymnastics is “one of the great family atmospheres that you will find in all of college athletics.”

"Go hang out with the ladies…. I mean… I wanna go see some scantily clad girls" – Barry Booker @SECNetwork pic.twitter.com/KnlYJZJ3KE

Cross made a point of clarifying that he was touting the family-friendly environment of women’s gymnastics, while Booker was making an awkward attempt at a joke. But Booker didn’t walk his remarks back when he had the opportunity, saying he’d watch the telecasts at home before correcting himself to say he’d be on the road watching SEC Network’s “Friday Night Heights” gymnastics coverage.

On Sunday, the SEC Network made it clear that it didn’t think Booker’s comments were funny, issuing a statement on Twitter that condemned the remarks as “inappropriate and unacceptable.”

The comments made during yesterday’s telecast were inappropriate and unacceptable. We take this matter seriously and are addressing it internally. SEC Network respects all student-athletes, and is committed to showcasing women’s sports with the utmost regard. https://t.co/SDjKD5JREP

As you may have noticed, the SEC Network quote-tweeted conference commissioner Greg Sankey, who criticized Booker’s remarks on the telecast without mentioning him by name. Sankey rebuked the comments as “inappropriate,” saying they “do not meet the expectations we have for the SEC Network.”

“We are in communication with the SEC Network and ESPN personnel,” Sankey continued, “and I am confident this issue will be handled appropriately.”

As a former gymnast in the SEC, I am disappointed in the comments made yesterday towards gymnasts during the ARK/Mizzou basketball game. However, I’m glad the commentator is being reprimanded and we are able to address the issue.

“I was mostly disappointed with the comment due to the ill intent and the sexualizing of a sport that has already faced so much when it comes to sexual abuse,” McGlone said. “A lot of times gymnasts are already seen in a negative manner for what we have to wear, and the fact that a trained professional would make such a comment was just discomforting!”

McGlone raises the important issue of sexual abuse in women’s gymnastics that made Booker’s comments so tasteless. But regardless, a broadcaster implying that college athletes, some of whom are still teenagers, should be leered at and objectified, especially because of what they’re wearing, is extremely problematic — and frankly, really just gross.

According to the Post’s Des Bieler, Booker did apologize later on the air. But Sankey’s reprimand raises the question of whether or not Booker will have to give another on-air apology before his next telecast or if some sort of suspension can be expected.