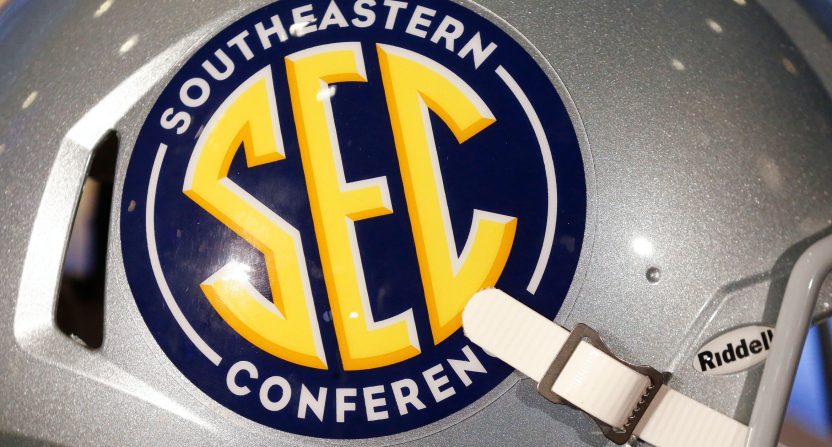 The SEC is the lone NCAA power conference to not finalize a COVID-19 forfeit policy, though one is (of course) expected by the start of the season.

And while much of the policy is expected to be similar to those released by the ACC, Big 12, Big Ten, and Pac-12, the SEC’s policy could end up including a financial penalty tied to TV revenue.

Per The Athletic, schools that are forced to cancel games because of COVID-19 outbreaks could end up with a smaller chunk of their revenue sharing from TV contracts.

Essentially, if canceled games cost the league television money, then schools whose teams had to forfeit would receive less from the conference’s revenue-sharing agreement than schools that did not have to forfeit games. The idea behind this is to avoid penalizing schools that had their teams ready to play.

However, per The Athletic’s reporting, there’s a significant asterisk to this penalty: it only comes into play if the total amount of games drops below the necessary minimum in the SEC’s TV deals with CBS and ESPN.

If the number of SEC game broadcasts falls below the minimum allowed in the league’s contracts with ESPN and CBS, then the league would receive less money than expected.

In short, this means that a team won’t necessarily be financially be punished for one forfeit, but if the amount begins to spiral out of control, then the penalties will come into play. I’m also curious if there will be a sliding scale for the penalties. For example, say the SEC falls under the minimum total of games in its TV deals. Would a school with one forfeit be punished on the same level as a school with say, four forfeits?

(of note: I have no idea what the minimum amount of games called for in the TV deals are. We dealt with this a little bit last year with RSNs having minimum requirements, which were rumored to be 70 games for NBA and NHL teams, or roughly 85% of a team’s schedule. The SEC has 56 conference games scheduled, and 85% of that would be roughly 48 games, allowing for eight possible forfeits before that minimum wouldn’t be hit. Again: this is just speculation on the number)

Until we see the actual policy, we’re just going to be speculating. But the fact that the SEC would even consider using a reduction in TV revenue, one of their biggest strengths, as a forfeit penalty shows just how seriously they’re taking the possibility of outbreaks this season.