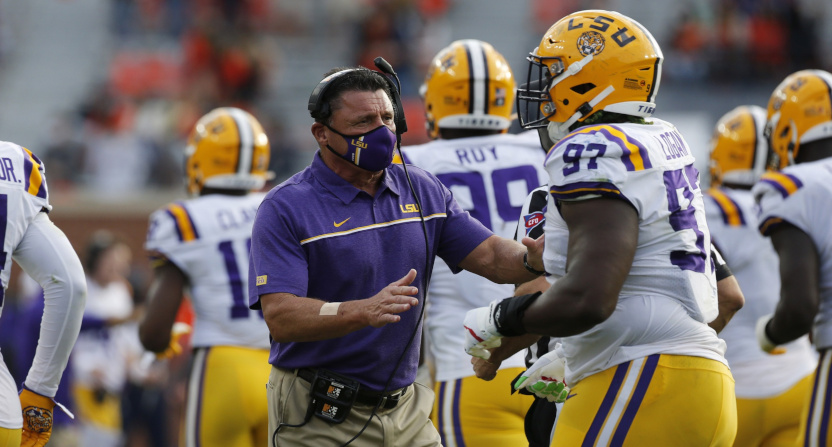 The COVID-19 pandemic continues to wreak havoc on college football. Week 10 saw 10 games postponed or canceled, including two Pac-12 openers (Washington-Cal and Arizona-Utah), and this coming week, Week 11, already has one in Auburn-Mississippi State (tentatively rescheduled for Dec. 12). And that’s part of a wave of problems across the SEC. Alabama-LSU (the SEC on CBS game of the week, set for 6 p.m. Eastern, following CBS’ Saturday Masters coverage) is also threatened, while Arkansas head coach Sam Pittman has tested positive and is self-isolating. Meanwhile, Texas A&M paused football activities Monday, and Kentucky is also experiencing COVID-19 issues.

The Alabama-LSU game may be the biggest news from the TV side, though. While that game doesn’t have the cachet of last year’s #1 vs. #2 (AP rankings) clash thanks to the Tigers’ 2-3 start and likely won’t set the same kinds of ratings records, it still involves a top team (Alabama’s 6-0 and newly #1 in the AP poll after Clemson’s loss to Notre Dame) and two teams with big fanbases, and it has a primetime slot (6 p.m. Eastern on CBS). And that game is certainly threatened given the numbers of players testing positive at LSU, as reported by Brody Miller of The Athletic:

LSU’s game against Alabama on Saturday is in jeopardy after a small COVID-19 outbreak has resulted in four positive cases on the LSU roster and many more players out due to contact tracing, sources tell The Athletic. Head coach Ed Orgeron confirmed Monday that there were positive tests within the Tigers program.

LSU is down to just one scholarship quarterback — freshman TJ Finley — and no long snappers or tight ends available for Saturday, sources say, as none of the sidelined players are expected to be cleared this week.

A decision on the game’s status is expected by the SEC office sometime in the next 24 hours.

Miller notes that the SEC requires a minimum of 53 scholarship players available for a team to play, including one quarterback, seven offensive linemen, and four defensive linemen. He adds that LSU was in the mid-60s before this thanks to transfers, opt-outs and other off-the-field reasons. So there isn’t a lot of cushion there. The Tigers are believed to be still ahead of the limit for the moment, and head coach Ed Orgeron (seen above on Oct. 31 against Auburn) said Monday that they’re still preparing to play, but that could change:

“It’s going to be challenging obviously with the guys that are out,” Orgeron said. “When they tell me we’re at a certain number and we can play or we can’t play, I think that’s up to the league and [LSU AD] Scott [Woodward]. And I think that by Wednesday that should be solidified. Right now, we’re playing Alabama and we’re ready to go.”

Meanwhile, Auburn-Mississippi State (which had been set for 4 p.m. Eastern Saturday on SEC Network) is definitely gone. Here’s a statement on that from Bulldogs’ AD John Cohen:

“Based on positive tests and those considered as close contacts, along with non-COVID injuries, we do not have the minimum number of scholarship student-athletes available for Saturday’s game against Auburn. While we are disappointed that Saturday’s game has been postponed, our priority is the health, safety and well-being of our student-athletes and staff. We will continue to follow all established protocols and evaluate the most responsible path to return to the field.”

Bulldogs’ head coach Mike Leach, on the other hand, appeared to be complaining about COVID protocols in comments to the media Monday:

Mike Leach was asked about what he thinks of COVID protocols. He said he has plenty but elected not to share them.

He did say this, though: "Our country has quickly become less free than it used to be."

So far, Auburn-Mississippi State is the only SEC game this week to actually go down, but that could certainly change. And it’s definitely been a rough week for the conference on the COVID-19 front. We’ll see if any further games wind up postponed or canceled.