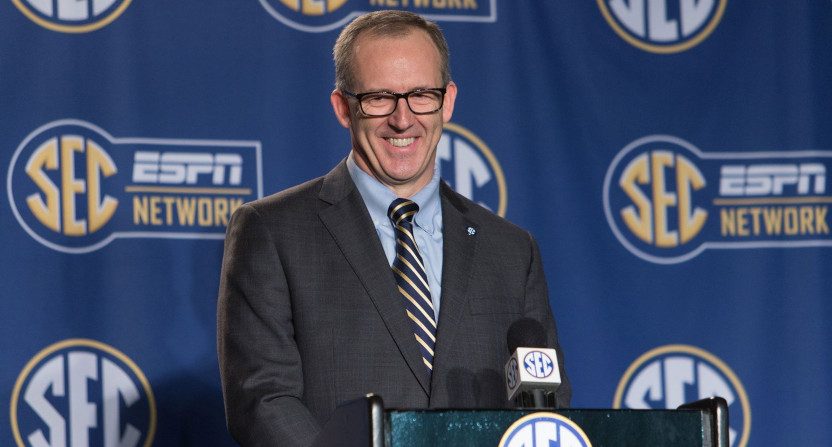 When the news came out in February that the College Football Playoff would stay at four teams through at least the end of its current contract following the 2025-26 season, there was a lot of discussion of how rapidly things had changed. Last summer, the CFP working group recommended going to a 12-team model and didn’t receive much opposition, which makes some sense considering the estimated $800 million or more to be made from an expanded playoff. However, this fall and winter saw opposition grow after the announcement that Oklahoma and Texas would be heading to the SEC, with that opposition  especially significant amongst the ACC/Pac-12/Big Ten “Alliance.” Well, ESPN’s Pete Thamel has a notable new piece on how the SEC may respond, suggesting that they may not be willing to return to what they previously were on board with. That piece suggests that they may look at some version of playoff for their own conference, with it to be determined how that would fit into the larger picture.

One variable that shouldn’t be underestimated is that SEC commissioner Greg Sankey is still mad about the way the College Football Playoff expansion talks collapsed earlier this year. He’s been openly vocal about his displeasure, and that’s going to guide league decision making. There’s been a general erosion of trust on the collegiate commissioner landscape since the chaotic COVID-19-addled summer of 2020.

“Whatever collegiality existed among those five commissioners appears to be gone,” said a veteran collegiate official. “Sankey’s in such a catbird seat right now.”

Thamel goes on to offer some quotes from Sankey (seen above in 2019) and Florida athletic director Scott Stricklin on that specific possibility:

SEC commissioner Greg Sankey stressed that no seismic change is imminent. But he did mention that an SEC-only playoff, in a variety of forms, was among the nearly 40 different models that SEC officials discussed at their fall meetings.

“As we think as a conference,” he told ESPN on Monday, “it’s vitally important we think about the range of possibilities.”

Florida athletic director Scott Stricklin echoed that notion to ESPN: “We have an incredibly strong league, one that will be even stronger once Oklahoma and Texas join. The focus should be on how we as a league use that strength to further position the SEC as we face new realities. Commissioner Sankey has encouraged our athletic directors to think creatively, and an SEC-only playoff is a different idea that we should absolutely consider an option.”

This is obviously a long way from happening, and the quick collapse of the once-seemingly-sure expansion of the existing playoff to 12 teams shows that even proposals at a much more advanced stage than this might still fall down. However, it’s obviously much easier to make a dramatic change entirely within a conference versus trying to make a change with a group of conferences that don’t always agree on much. And the idea of an intra-SEC playoff seems to be more likely now than it has in the past for a few reasons.

For one, this makes more sense in a 16-team league than a 14-team league. A larger league means there are more teams that won’t meet on the field each fall, making a playoff of some sort possibly a “fairer” way to hand out a league championship than a two-team championship game. The bigger league also provides for a more reasonable percentage of playoff to non-playoff teams, whether this is a four-team (25 percent) or eight-team (50 percent) playoff. Beyond that, the SEC’s entire TV rights will soon be with ESPN, making it much less complicated to potentially convert regular season games to playoff games and gain more TV money in the process.

There’s also even a chance of more games in total, depending on how this would be done. And the “No, more games are unfair to student-athletes” argument that’s been used against playoff expansion in the past feels weaker in a NIL era where many of those athletes are making notable revenue before they turn pro. And the NCAA itself just loosened its regulations on championship games, paving the way for conferences to remove divisions, and there’s debate over how long the NCAA itself will continue to oversee college football. And with this diminishment of “collegiality” to the other conferences, the SEC may not be as concerned as they might have been in the past with what other conferences could think about an intra-SEC playoff.

As noted above, this is very much just a concept under discussion at this point. And we don’t even know what parts of it are under discussion. But it’s notable that figures like Sankey and Stricklin are saying this is on the discussion table. There’s a definite chance it doesn’t wind up going further than that, but if it does, this could be the start of dramatic change for college football.