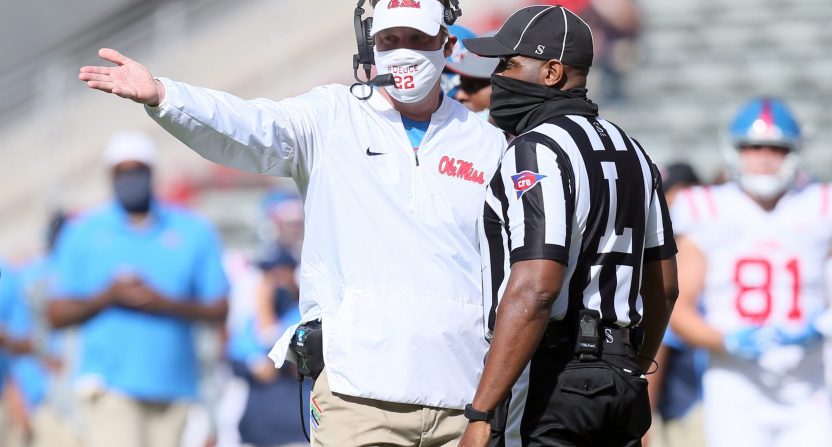 Criticizing referees is a big no-no across all sports. A coach or player can criticize their teammates, their opponents, fans, the media, etc., but criticizing the referees will bring about a fine.

That fine can be levied even if the person making those comments was correct that the referees were wrong and that’s what happened to Ole Miss head coach Lane Kiffin.

Kiffin retweeted a post claiming SEC officiating was “absolutely atrocious” after a late game kickoff seemed to go off the fingertips of Shaun Shivers and into the end zone. The ref ruled the play as a touchback once the ball entered the end zone but if the ref had seen the contact made by Shivers, that would’ve been a live ball which Ole Miss likely would’ve recovered for a touchdown. Instead, Auburn kept the ball and scored the game winning touchdown on that same drive.

The SEC put out a statement admitting a review should’ve occurred but they were still going to fine Kiffin $25,000 for violating SEC Bylaw 10.5 about criticizing officials.

On Monday, Kiffin spoke to the media about the conversation he had with the SEC. Well, he couldn’t reveal much because there’s an SEC rule preventing Kiffin from divulging anything within the conversation. Kiffin did say that the players and fans deserved to hear what he was told.

Lane Kiffin calls out SEC policy, credit the Ole Miss coach for sticking up for his team.

“I really wish for our players, for our fans, that they could hear what I was just told. I think they deserve to.” pic.twitter.com/KM3I3lkoYq

This is my personal pet peeve with officiating. There’s a lack of transparency among referees across sports and it appears no one is held accountable for the decisions they make. I get it, referees are graded behind the scenes but the public never hears if a referee has been reprimanded or even hear from that referee to get their side on what happened during a controversial call. Who knows, maybe what they saw from their point of view was different than what we saw on TV.

When Jim Joyce made the wrong call to deny Armando Galarraga of a perfect game, he immediately admitted fault and felt horrible for making a mistake. He’s human, he made a mistake, and people largely sympathized with him taking on that responsibility. Instead, referees are kept out of sight under the justification that the referee is being protected, and some of that’s warranted given how toxic social media and society is, but it just feels like someone has something to hide a lot of the time.

Anyway, Kiffin spent the rest of the day tweeting and retweeting about the situation. Some tweets might fall under the umbrella of criticizing officials but I guess if you’re going to get a $25,000 fine anyway, you might as well get your money’s worth.

Kiffin tweeted a video about a man paying a $3,000 bill with pennies and posted where he could find 25,000 pennies. After being notified that would only be $250, Kiffin came back with 250,000 pennies. That’s only $2,500 so third time was the charm with 2.5 million pennies. Kiffin joked that he was just seeing if the SEC (the Southeastern Conference and not the Securities and Exchange Commission) would review his math.

Was just checking to see if @SEC would review my math to get it right this time??? After future review it’s 2.5 million pennies. Thanks for stopping to get it right ??? https://t.co/zvWvWw0GFk

He might be $25,000 lighter in the wallet but Kiffin kept his sense of humor after a whirlwind 48 hours.