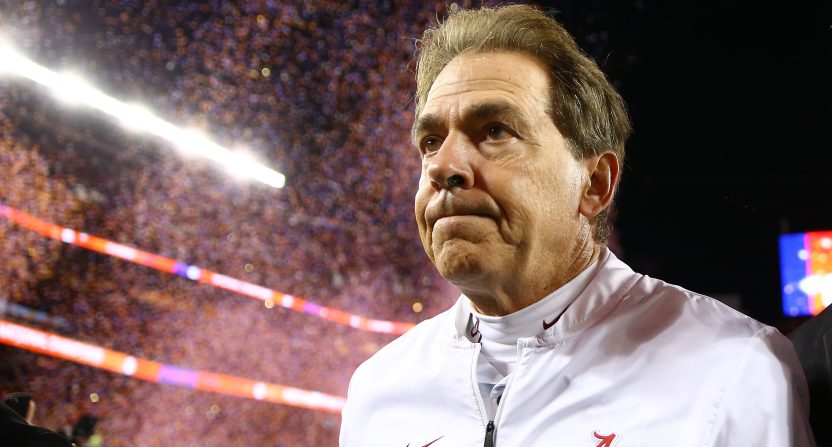 Regardless of the outcome of the 2019 College Football Playoff National Championship game between the Alabama Crimson Tide and Clemson Tigers, the game was declared a disappointment. For some that had to do with the fact that these two teams were playing in the CFP for the fourth consecutive season, and third time for the title. However, those people should be thankful that such nationally relevant programs and well-traveling fanbases were involved, because otherwise, the Santa Clara location would have made for an epic disaster instead of merely a regular disaster.

The remoteness of Levi’s Stadium’s location as a college football destination, both literally and figuratively, coupled with the stadium’s overall blandness and poor field conditions, has led to many referring to it as the worst National Championship venue available. Selected more as a craven cash grab than a smart choice that maximizes the ability of college football fans to enjoy it, the College Football Playoff is reaping what it sowed with plummeting ticket prices and general disinterest from locals. All the Imagine Dragons in the world can’t save this poor choice.

Of course, the logical decision would be for the CFP would be to play the game in one of the stadiums they use for the semifinals, all of which happen to be some of the most iconic locations in college football. Not to mention they’re sure things when it comes to selling tickets and making it easy to get there. The other logical decision would be to hold the title game on a college campus in one of the many stadiums sitting empty and more than happy to host tens of thousands of fans in a venue they’ll appreciate.

But we all know the CFP isn’t going to do this logically. They’re going to go for the place that offers them the ability to sell the most tickets and gives them the most money. So in thinking along those lines, let’s consider some non-CFB-related sites where they might be better served in terms of making for a great gameday experience and not shoveling bad PR all week.

A bit obvious perhaps but there’s a good reason for that. Vegas solves all of your financial and logistical concerns (hotels, easy transportation, things to do) while also being, you know, Las Freaking Vegas. It’s the kind of destination people want to flock to anyway so putting a football game there is really the bonus. Plus, by the time they’re ready to do this, the new state-of-the-art Raiders stadium will be fully operational. Of course, this one will come down to whether or not the CFP and NCAA can deal with the gambling that will surround them, but if we’ve learned anything, it’s that both entities are very malleable when it comes to making money.

If you’re going to have the title game in California and not at the Rose Bowl, your next-best option is to have it someplace else in Los Angeles. Again, it’s a destination city where people would be happy to go anyway. Sure you run into the same issue as being very far from the college football epicenter, but at least you won’t have the kind of issues a Santa Clara-based stadium represents. The other good part is that you’ve potentially got options. Right now, you could play the game in the Coliseum, which might not have the modern bells and whistles, but does put you right downtown near all the action. Or, if you wait a few years, you could take advantage of playing in the state-of-the-art stadium the LA Rams are building in Inglewood. It’s the best of both worlds. You get to play in the fancy new place while also giving fans a good reason to make the trip.

A great place to play that’s close to the college football action but still it’s own destination would be San Antonio. The Alamodome provides you with 64,000 seats right on the southeastern fringe of downtown San Antonio, not a bad place to take a trip. It’s also a pretty smart move if you want to play the odds. Chances are you’ll be hosting an SEC squad and you might even luck out and have a Big 12 team as well. The odds remain good that at least one fanbase won’t have to travel very far and will appreciate the southwestern vibe of the region.

First things first, we’ll need to make sure The Dome at America’s Center is in good shape to host any kind of event, let alone a National Championship. Apparently, it is since the XFL’s St. Louis franchise will play home games here. Once that’s settled, it’s really about the fact that this stadium is centralized to the country. It’s in Big 12 country (even though Missouri is in the SEC). And it’s reasonably close to Big Ten and some ACC schools as well, which means no one has to fly cross-country to get there. Plus, St. Louis has plenty of good reasons to want to visit otherwise. Let’s just hope everyone doesn’t hang out in the Arch before and after the game.

Along the same lines as St. Louis, Indianapolis makes a lot of sense if you want to centralize the location without minimizing your financial possibilities. Lucas Oil Stadium can fill over 62K in there and if it’s good enough to host Final Fours it’s certainly good enough to host a football title game. Some might say that Indianapolis lacks the appeal of, say, a New Orleans or a Miami, but ultimately if we’re just trying to provide a destination that makes sense for college fans, you could do worse. Extra bonus if a Big Ten team makes it and they’ll show up in droves. We’d worry about a Pac-12 team’s travel plans but, you know, the Pac-12 isn’t exactly knocking down the national title game doors right now.