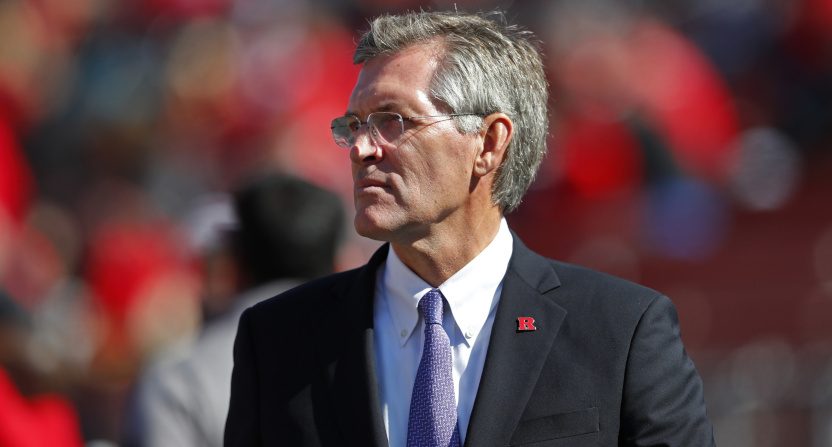 What sort of response would you expect to see from a NCAA Division I athletic director to questions about allegations of abuse against a coach? Probably not “You guys are f—— scum. Why should I help you people?”, but that’s what NJ.com’s Matthew Stanmyre and Keith Sargeant got from Rutgers athletic director Patrick Hobbs this week. As part of the reporting process ahead of publishing a detailed story covering allegations of abuse from Scarlet Knights’ softball coach Kristen Butler and her husband Marcus Smith, Stanmyre and Sargeant reached out to Hobbs with questions about the school’s response. And his response (which they detailed in the eventual published story) wasn’t what you’d expect:

After NJ Advance Media contacted Rutgers Tuesday with questions about the allegations, Hobbs called one of the reporters working on the story and launched into a profanity-laced tirade that ended with him saying “You guys are f—— scum. Why should I help you people?” Hobbs sent the reporter a text message an hour later to “apologize for my words.” He then added, “This narrative around RU being a place where abuse is tolerated is bull—-. But it gets clicks.”

In a more detailed response Wednesday, Hobbs, [deputy director of athletics Sarah] Baumgartner and Butler categorically denied all the allegations lobbed against the coaches and the athletics department. Butler said none of the team’s conditioning sessions were abusive and that she never punished the team with conditioning. She pointed to university protocols that permit her to reevaluate a player’s scholarship but said the characterization of revoking scholarships is inaccurate. She also admitted no wrongdoing on behalf of her husband.

That’s quite the response.

Update: Hobbs has now apologized, and university president Robert Barschi criticized his conduct in a statement, while also calling for an outside investigation. Via Aaron Breitman at SB Nation Rutgers site On The Banks:

I have spoken to Pat Hobbs regarding the language in the exchange with a sports reporter at the Star-Ledger. While I understand the frustration he was experiencing at not being given time to thoroughly respond to an expansive list questions, I have made it clear that there is never a time when such language is acceptable.

Mr. Hobbs has apologized to the reporter directly, and furthermore he has issued the following apology to our community:

The other day I reacted inappropriately when informed that we would not be given some additional time to respond to a reporter’s questions concerning our softball program. In this case, the questions centered on concerns that were raised from parents and a number of former players regarding some of the practice drills and team activities for the softball team following the recruitment of a top flight Division I softball coach.

The concerns were reviewed and where remedial action was necessary, changes were made. A report to the NCAA of a single Level III violation for allowing individual student athletes to practice a total of two hours more than allowable over the course of a two-month period, was reported to the NCAA. The volunteer coach, Marcus Smith, was separated from the team.

As a leader at Rutgers University and someone who should serve as a role model to our young men and women it was wrong for me to use the language that I did. I apologized to the reporter but I owe an apology to the Rutgers community as well.

It won’t happen again. The well-being of our student-athletes is always my first priority, and we will continue to be vigilant in addressing any concerns across all of our programs.

Yes, there is a narrative about Rutgers and coaching abuse, including the sagas around the exit of men’s basketball coach Mike Rice in 2013 (before Hobbs’ tenure as AD began in November 2015) and swimming coach Petra Martin in 2017. But that doesn’t mean that further allegations should be ignored, especially when they’re spelled out in the detail that the story from Stanmyre and Sargeant relates (which, at the very least, raises serious questions about the accuracy of Butler’s claim that none of the conditioning sessions were abusive or punitive; there are numerous accounts of conditioning sessions that appear to meet both of those criteria in the story). And it doesn’t mean that these reporters are “f***ing scum” out to “get clicks”; in this case, it’s notable that the allegations in question were spelled out in a 23-page legal notice sent to Hobbs and Baumgartner in July on behalf of one former player, who’s seeking damages from the school for lost tuition. So Hobbs was well aware of the allegations here before this request, and yet still called reporters “f***ing scum” for asking questions about them.

Hobbs and Rutgers certainly can try to defend their coach’s conduct, if they feel that’s worth it. Schools have different thresholds for what sorts of coaching behavior they’re willing to tolerate, and perhaps Butler’s actions here are just fine with the Scarlet Knights. And perhaps the school believes Butler’s claims that the behavior here (which, according to players, involved everything from repeated 100-meter wind sprints that caused some collapses as punishment for going over budget at Cracker Barrel to intentionally hitting players with pitches and ground balls to confiscating players’ phones and going through them to disturbing and sexist comments from Smith) wasn’t punitive or abusive, although her actions sure don’t look good based on the reporting here. But even if you dispute this reporting and this story, there’s a way to do it without calling the journalists “f***ing scum.” Especially if you’re an athletic director.