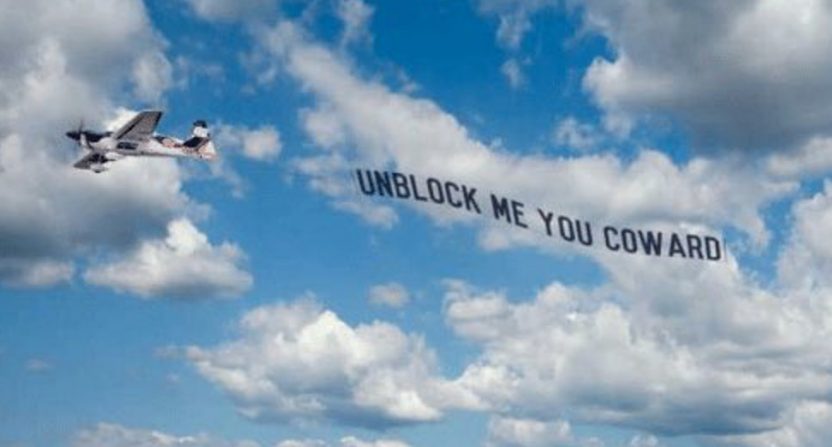 Tuesday’s news of federal judge Naomi Reice Buchwald’s ruling that President Donald Trump can’t block Twitter users “as a result of the political views that they have expressed” could have some interesting implications for the college sports world. Whether the president can block critics or not isn’t all that important to sports, but it’s notable that this ruling (which came after a group of plaintiffs sued after being blocked by the president) appears to extend to all public officials:

Federal district court judge in New York says Trump cannot block Twitter users over their political views on his @realDonaldTrump account in a fascinating decision that deals with the frontiers of digital public speech. pic.twitter.com/8xPXuzZ2s9

The full order can be found on the site of the Knight First Amendment Institute at Columbia University (one of the plaintiffs in this case) here, and it’s interesting reading. It holds that Twitter, or more specifically, the interactive space associated with each tweet (which includes replies), “is properly analyzed under the Supreme Court’s forum precedents,” is ” a designated public forum,” that “[v]iewpoint discrimination. . . is presumed impermissible when directed against speech otherwise within the forum’s limitations,” and that “The continued exclusion of the individual plaintiffs based on viewpoint is, therefore, impermissible under the First Amendment.”

Considering that NCAA coaches and athletic directors at public universities are state employees (and some of the best-paid state employees), and that their Twitter accounts are also ways to communicate to the public about their position (something detailed early on in that decision), it would seem likely that this ruling would suggest they might wind up in First Amendment trouble by blocking critics. (Don’t expect “It’s a personal account” to work as a defense, either, as that doesn’t work with private email accounts, and the Twitter account in question here is President Trump’s personal account.) Unsurprisingly, college football Twitter is already having a field day with this:

oh god UNBLOCK ME YOU COWARD is law now https://t.co/SuftFDjL8M

As long as the person works for the government, how many state school coaches block you again? Cause that answer should be zero according to this.

should I move to South Carolina just to force Will Muschamp to unblock me y/n https://t.co/dAGu0S0pqq

Now, the decision indicates that officials are not forced to pay attention to all Twitter replies, and that muting is a valid action; it means they won’t see comments from annoying users, but that those users’ comments can still show up in the replies to a tweet and that others can see them (the crucial part of the “forum” analysis here). So, we may see public officials just decide to mute critics instead of blocking them going forward.

This also doesn’t instantly mean that all previous blocks are now undone. The court’s ruling at this point is only that this practice is unconstitutional, expecting the president (and everyone else) to comply rather than compelling compliance. Thus, if particular college football or basketball fans want to be unblocked by coaches, they might have to take legal action of their own to try and force that compliance if coaches aren’t immediately receptive. And this presumably doesn’t apply to private school coaches, professional coaches, or journalists, so Tim Kawakami’s “pay me to unblock you” business model remains intact.

But this is potentially interesting for college coaches and ADs, who have unquestionably blocked plenty of critics over the years. For the moment, at least, it seems that strategy may be a thing of the past. They may have to turn to the mute button instead.