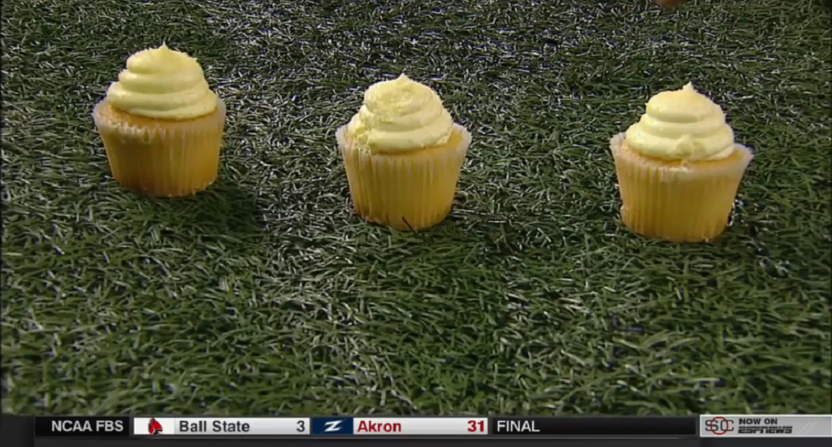 The No. 6 Washington Huskies pummeled California 38-7 in PAC-12 action Saturday night in Seattle. Washington is now 6-0 on the season and have a ridiculous +197 point differential. And with unranked Iowa State’s stunning upset over No. 3 Oklahoma, Washington’s College Football Playoff hopes get a boost.

However, Washington hasn’t exactly had a difficult schedule this season, particularly with their non-conference games. The Huskies began their season with a 30-14 win at Rutgers (1-4; lost at home to Eastern  Michigan), followed by a 63-7 win vs Montana (a Big Sky team), and a 48-16 win vs Fresno State (a Mountain West team that went 1-11 last season).

Kessenich showed actual cupcakes “as a visual” of the Huskies’ non-conference schedule:

The cupcake schedule talk comes on the heels of Washington head coach Chris Petersen complaining about Washington having to play night games due to ESPN’s broadcast scheduling preferences (imagine how much he then hates having his team’s schedule ridiculed on these broadcasts).

Kirk Herbstreit then fired back at those comments on Saturday morning’s College Gameday, saying that people like Petersen should be thanking ESPN for the exposure the network gives the PAC-12.

And PAC-12 commissioner Larry Scott was actually brought on ESPN’s broadcast of the Washington game to talk about the TV deal and late start times. Scott said that “there’s no doubt that playing late at night and kickoffs after 6 PM have been beneficial for the PAC-12.”

As you can imagine, many fans weren’t enjoying ESPN’s coverage of Washington and the PAC-12.

Straight F to ESPN for what they did today to Washington and the Pac-12. All-around embarrassing coverage. https://t.co/7mMoyfZo3t

Did ESPN have a gun pointed at Larry Scott when they had him on the UW broadcast defending ESPN? Reminded me of a hostage video.

Pardon me. Cal played USC to the fourth quarter. UW is beating them to a pulp and ESPN's message is UW is "soft"

Good grief I am so sick of ESPN and their nonstop agenda pushing against Washington. Put #UW on Fox only.#UWvsCAL

the entire state of washington: pic.twitter.com/fC4XTCsshk

Hey @BrockESPN how about you lay into your coworkers at ESPN for taking cheap shots at UW. Quint & Rod can shove it.

Don’t ever disrespect the University Of Washington and Coach Petersen. The amount of unprofessionalism from you guys is ridiculous. @ESPN

Oh god ESPN still pushing the "Washington should be grateful for us" agenda in the middle of the game. Gross.

Put these ESPN commentators working the Washington football game on a pretzel cus they salty.