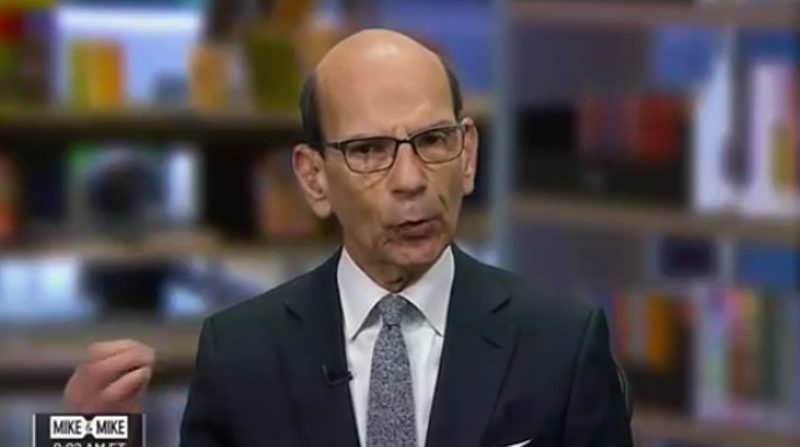 The voice of the SEC, Paul Finebaum, has been saying it for years and he is not backing down; in his eyes, the Big 12 is on the verge of implosion. His thoughts are not totally unique given the Big 12’s current situation, but Finebaum just poured gasoline on the conference in gasoline and lit the match to make his point.

In an interview on SiriusXM on Wednesday, Finebaum was asked about comments he made a week ago about the current state of the Big 12. They were none too flattering, of course, and the SEC Network host suggested Oklahoma could at some point in time pack their bags and leave the Big 12 for another power conference.

“I see the Big 12 as a complete trainwreck. The Big 12 is the Titanic, and you can see the iceberg in sight,” Finebaum said, as transcribed by The Dallas Morning News. “I love the fact that at the Big 12 meetings the other day, the athletic directors all scoffed at reports with the old Mark Twain line, “The reports of my death have been greatly exaggerated.” I don’t think we’re exaggerating. You can lay out any set of facts you want and in my mind, they don’t have an answer other than being in a complete state of oblivion.

The Big 12 has had its fair share of issues over the years amid realignment changes and the power shift in college football gaining more momentum for the power conferences. The Big 12 was reduced to eight members before being able to add West Virginia and TCU. It lost its conference game as a result with only 10 members, and thus lost some easy revenue from a conference championship game (the Big 12 is bringing a championship game back this year). The conference played a handful of Group of Five schools for fools last fall as it went through an expansion review process that included meeting with potential expansion targets. It was a flat-out mess. And that has just been what has gone on off the field.

The Big 12 has appeared in just one of the first three College Football Playoff brackets, and is has not won a game in the new championship format yet (the ACC, Big Ten and SEC each have a national champion and the Pac-12 has had a runner-up). The Big 12 is also facing criticism for the level of play in the league, a point that was brought into question following a disappointing showing in the NFL Draft.

Oen of the biggest concerns for the Big 12 has been the leadership, and Finebaum did not mince words when discussing Big 12 commissioner Bob Bowlsby while quickly transitioning to the idea of Oklahoma wanting out of the Big 12 as quickly as possible;

To me, the commissioner is one of the weakest of the Power 5 college commissioners. I know they can argue they don’t have a television network by saying, ‘Look at our revenues from television.’ And that’s correct. They have some very good television deals. And we all know about the University of Texas’ deal. But I don’t see this league going anywhere. I said the other day that I thought Oklahoma was trying desperately to get out or look for a path out of the Big 12 as soon as it can, which is a number of years away, and I believe that. And I have reason to believe that. I know people think that those of us behind microphones just throw things up against the wall and see if they land or stick to something or somebody. In this case, I’m not throwing that up against the wall. I believe very strongly, based on information that I’ve been told [though he is not citing], that Oklahoma flat-out wants out of the Big 12 as soon as it can get that door open without mortgaging its entire bank account on its future.

Finebaum may not be going out on a limb too far with his statements. Oklahoma president David Boren has not been shy about addressing his concerns about the future and stability of the Big 12 in the past, and if the Sooners ever did decide they wanted to leave the Big 12, then they would quickly draw interest and a possible invite from either the Big Ten or the SEC behind closed doors (I’d be cool seeing Oklahoma and Nebraska back in the same conference and division). But the numbers game would probably mean Oklahoma would have to bring someone with them. Oklahoma and Oklahoma State? Oklahoma and Texas? Oklahoma and… Kansas? West Virginia? Who knows, but we don’t have to cross that bridge at this time. Oklahoma likely isn’t going anywhere for a while.

The Big 12 does lag behind its power conference peers in a number of ways. You don’t have to be Paul Finebaum to see and recognize that. Finebaum may say stuff that gets a rise out of people at times, and this may be worded that way, but his opinions are rarely based on hot takes for the sake of hot takery when it comes to the climate of the sport of college football. Well, unless you’re an Auburn fan. We’ll see what happens to this version of the Titanic, and if the Big 12’s heart will go on.

Contributor to NBCSports.com's College Football Talk, Athlon Sports and The Comeback. Host of the No 2-Minute Warning Podcast on iTunes, Stitcher Radio and iHeart Radio. FWAA member and Philadelphia-area resident.