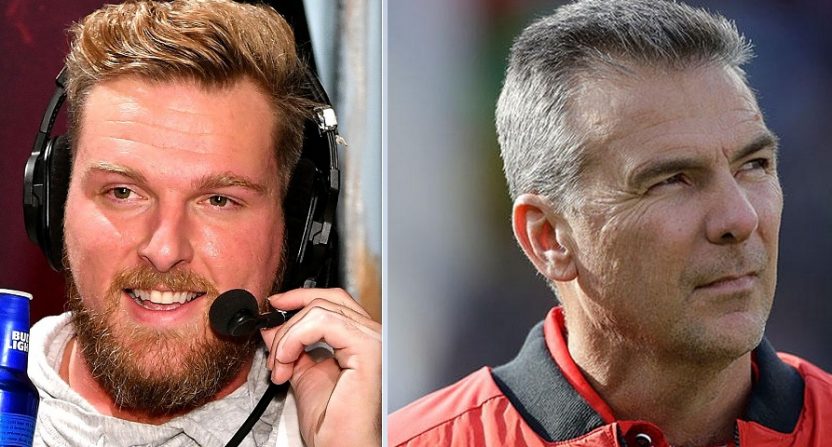 The growing competition between Fox, ESPN, and their respective Saturday college football pregame shows became one of the more intriguing storylines of the 2019 season, especially from a sports media standpoint.

With college football’s regular season over and gameday Saturdays now taking a rest until next year, the rivalry between the two shows and personalities featured on those programs figured to cool down. But ESPN’s Pat McAfee kept the stove hot by taking a shot at Fox’s Urban Meyer Monday morning during an appearance on Get Up.

If you’re not familiar with the feud between the two college football analysts, McAfee gained some notoriety for ESPN College GameDay before the Oklahoma-Baylor game in mid-November by belly-flopping into the Brazos River.

Last time I allegedly did what I’m about to do I ended up in a jail cell ?LETS GOOO @CollegeGameDay pic.twitter.com/bk3FolesBL

Was it dumb? Sure. Attention-grabbing? Without a doubt. Fun? Yes, which is one of the reasons why College GameDay enjoys such popularity.

Meanwhile, Fox has tried to portray its Big Noon Kickoff pregame show as more of a pure football show, fueled largely by Meyer demonstrating schemes like RPOs and techniques such as pass-rushing and throwing end-zone fade routes. For many, Meyer’s tutorials have been a refreshing alternative and Fox has smartly featured those segments on its YouTube channel.

During an interview with Big Ten Network’s Mike Hall about his new role as a TV analyst, Meyer made sure to distinguish what they were doing on Fox to what was happening on ESPN.

Just interviewed Urban Meyer. At one point talked about this year doing tv, he says "I had fun – turns out folks wanna talk about football, they don't want to see jumpin' in lakes or goin on rollercoasters"
…
…I feel I may know what he was alluding to.
The man is competitive.

The “jumpin’ in lakes” quip was clearly aimed at McAfee and his Brazos River stunt. Hall and those who either saw the interview or read his tweet knew what Meyer was referring to. McAfee didn’t miss it either and saw an opportunity to correct Meyer, in addition to swiping at the coach’s health issues he dealt with at the conclusion of his tenures at Ohio State and Florida.

I know it can be hard to remember things but it was a river not a lake.

My mom as soon as it happened said “When you were in the air, I started having heart complications OUT OF NOWHERE”

She’s been completely fine ever since.. happy for her.

McAfee saw another chance to take a swing at Meyer during an appearance on Monday’s Get Up, joining the panel of Mike Greenberg, Dan Orlovsky, and Rex Ryan to discuss the possibility of the former Ohio State coach taking a head-coaching position in the NFL. But he couldn’t quite begin his remarks with the subject at hand.

This is what Urban Meyer has done at a lot of places he's gone in, won, scandal, left.. I don't know if he can do that in the NFL @GetUpESPN pic.twitter.com/guKtBzy18J

“Urban Meyer took a shot at me out of nowhere when he was doing a very small interview for somebody,” McAfee said. “So I obviously think he’s a bum strictly because of that.”

Not sure if that was pertinent, and it was probably an unnecessary shot at Hall and Big Ten Network, but that remark will draw notice!

From there, McAfee went on to explain that college coaches with no NFL coaching experience typically haven’t found much success, largely because they can’t control professional players as they can in college.

Meyer has previously been linked to the Dallas Cowboys job, but his appearance at Sunday’s Eagles-Redskins game raised several eyebrows. He was a guest in Redskins owner Daniel Snyder’s box during the game and during the telecast, Fox’s Thom Brennaman explained that Meyer attended Saturday’s Army-Navy game and decided to take the short trip to D.C. to see several of his former players, including Dwayne Haskins, Terry McLaurin, and Alex Smith.

McLaurin told reporters after the game that Meyer was his guest and appearing at the game shouldn’t be an indication that he was showing interest in becoming the Redskins’ next coach.

We probably shouldn’t expect anything less than bold from a guy willing to wear a bolo tie on television. Pat McAfee may just keep this feud simmering throughout the winter, especially if Meyer continues to be in the news.