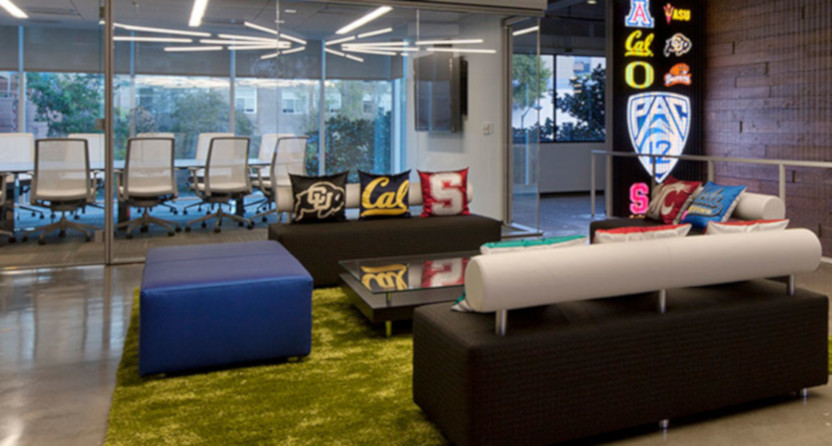 One of the long-discussed elements of the Pac-12’s situation was how much the conference was spending on rent for its San Francisco office, used for both the conference headquarters and their network. John Canzano wrote at The Oregonian in 2018 that they were spending $6.9 million annually on rent, a far cry from the $318,000 a year for the SEC headquarters in Birmingham or the Big Ten’s total of $1.5 million across a suburban Chicago main office and a small New York office. (Granted, those conferences have different network setups run by ESPN and Fox respectively, so it’s not a one-to-one comparison, but the Pac-12 price tag was still high.)

Well, new Pac-12 commissioner George Kliavkoff (who took over that role from Larry Scott last summer) decided this week that the conference will move out of those San Francisco offices by next June. As Jon Wilner writes in The (San Jose) Mercury News, that will have most employees going to (or continuing to use) a work-from-home model, with a small production facility to be established somewhere for those who need to use production equipment. That’s going to be a big savings on rent, with Wilner noting that the conference paid around $8 million in rent in fiscal 2020. And while there will be some costs under the new setup as well (it will include in-person gatherings from time to time at conference schools, plus that production facility), Canzano writes (at his new Substack newsletter) that the San Francisco office rent had escalated to $696,000 per month ($8.35 million annually), and estimated overall savings will be $7 million for each of the conference’s 12 schools across the next decade:

The financial benefit to conference members is roughly $7 million in savings per university over the next decade. That by itself is worth celebrating because the media rights revenue projections for Big Ten and SEC double up the Pac-12 in the coming decade.

So that’s a significant way for the Pac-12 to reclaim some of the financial ground they’ve been losing in per-school distributions to those other conferences, and one that doesn’t need to count on the “massive increase” they’ve been banking on (which they may well get, but those other conferences may get even more). But beyond that, as Canzano goes on to note, it’s a thoughtful move, and one that seems like it will work well for many of the conference’s employees, who had endured many indignities during the Scott years.

Larry Scott, Kliavkoff’s predecessor, alienated his staff. I found a single-spaced six-page letter the other day sent to me by one of his employees. It outlined a long line of petty transgressions, frustrations and offenses.

The letter writer noted that one football season Scott stopped the long-standing practice of giving every employee two Rose Bowl tickets as a holiday bonus. The tickets were regularly given to the conference by the bowl game as a perk. According to the letter, Scott told the staff there was a shortage of tickets. Staff members later found out the commissioner gave complimentary Rose Bowl tickets to a group of parents on his son’s soccer team.

Kliavkoff must be paying attention. Because he’s been especially inclusive with employees.

…The commissioner reminded me that people’s lives are involved. He sees his employees as people. Many of them have spouses, children and mortgages. Kliavkoff said that the matter was being discussed but he was reluctant to say more. Bottom line, the decision would have a major impact on his staff.

Kliavkoff informed his employees directly on Tuesday. Turns out you can save money, please your bosses, do the right thing and value people at the same time.

Moving away from a pricey and much-mocked headquarters alone isn’t going to be enough to help the Pac-12 catch the Big Ten and SEC in per-school distributions. But it’s a reasonable and positive move, one that fits better with a 2022 world where it’s possible and often beneficial to do a lot of work remotely. And the San Francisco headquarters didn’t make a lot of sense even in pre-pandemic times; it was a lot of rent to pay for a location they didn’t particularly need (being in Birmingham sure isn’t hurting the SEC), and one that led to many employees there struggling to find reasonable accommodations in the Bay Area’s housing market. It’s positive that the conference has gone away from that, and has done so in a thoughtful manner that seems like it will work for their employees, and one that will benefit their member schools’ bottom line as well.