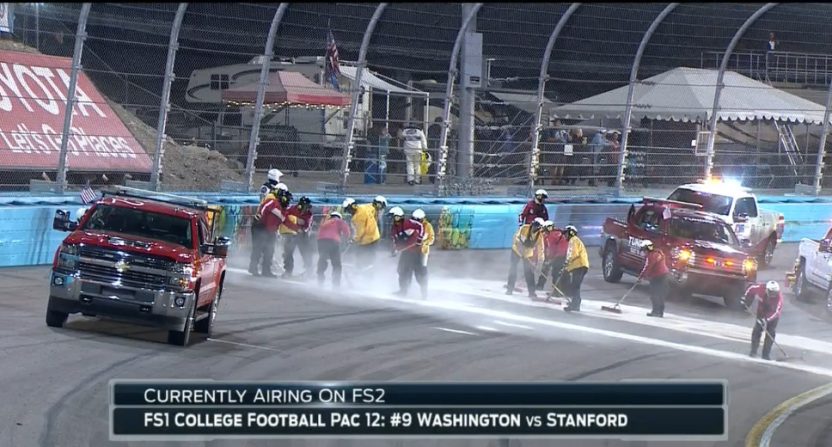 Whenever live sports wind up airing on an unusual channel, you can bet that people will complain loudly. That’s true even with long-established events, such as NBC Universal’s airing of final-day Premier League matches across channels from MSNBC to SyFy to Oxygen, and with well-publicized events, such as NBC airing NHL playoff games on Golf Channel, but it’s perhaps even more prominent when it comes unexpectedly thanks to a previous event running long.

One of the biggest complaint-causing issues there came last November, when a long-running NASCAR truck race on FS1 led to the first quarter of a Washington-Stanford football game being shown on FS2 (with Washington ranked ninth nationally at the time), and CBS’ Dennis Dodd has now cited that as a primary point of evidence in a larger column about the Pac-12’s revenue and status issues. The column makes some valid points but also perhaps exaggerates issues from overflow, but it does contain some useful news that future Pac-12 overflow games will wind up on the wider-distributed Fox Business Network instead of Fs2:

The beginning of one of the biggest Pac-12 football games of last season was preempted by a NASCAR truck race. When it became apparent the Lucas Oil 150 was going to run long, FS1 delayed the Stanford-Washington game by 15 minutes to 10:45 p.m. ET.

It wasn’t enough of a delay. Even though the game was shifted to little-seen FS2 and the Fox Sports app, thanks to the trucks — and Fox’s commitment to them — most viewers missed the entire first quarter.

“That was unfortunate,” Pac-12 commissioner Larry Scott said recently. “I was not happy about that. There were definitely [people] upset about that.”

Scott is proud to say such an occurrence will no longer happen. The Pac-12 was assured by Fox officials a couple of weeks ago that, were there to be a future conflict, conference games will be shifted to Fox Business Channel.

There is something to be said for small victories: Lou Dobbs over racin’ trucks.

Before digging down on the Pac-12’s current place in the Power Five, you must ask this basic question: Would any of that have happened in the Big Ten or the SEC — the two strongest, most prosperous and (some would say) best-run conferences?

Well, the answer to that “basic question” is actually at least partly “Yes.” In fact, on a single day in September last year, a long-running NASCAR truck race meant that Maryland (a Big Ten team) wound up starting its game against UCF on Fox Business instead of FS1, and an all-Big Ten game between then-eighth-ranked Michigan and Purdue that was originally set for Fox started on Fox Business thanks to a baseball overrun. Now, maybe Dodd’s argument is that that those conferences don’t appear to have wound up with the indignity of FS2 (an estimated 57,613,000 subscribers in May, which is a nice rise from the just-over 50 million they had at the start of 2017, but a long way from Fox Business’ estimated 84,435,000), but it’s far from true that only the Pac-12 gets bumped for other content; that regularly happens to the Big Ten, the SEC, and everyone else.

And it’s notable that a week before the uproar around the FS2 game last November, the start of No. 21 Stanford-No. 25 Washington State (set for Fox, bumped thanks to a Michigan State – Penn State weather delay) was sent to Fox Business, not FS2. (FS1 had its own battle of ranked teams in Oklahoma-Oklahoma State.) So yes, sending Stanford-Washington to FS2 was problematic, and Scott and the other Pac-12 people complaining about that had a point. But it’s not like Fox did that with every Pac-12 overrun, or that they don’t have overruns and programming shifts with games from other conferences. It is notable that they’re vowing to use Fox Business instead of FS2 going forward, though.

The overrun issue is dumb, because it’s often not about the strength of the bumped programming. And citing it as an example of conference strength is particularly silly, as even the top conferences get games bumped regularly; sports end at uncertain times, and have uncertain delays, and that leads to programming being moved around. In some ways, this is more of an ESPN versus Fox issue; the SEC has most of its games on ESPN’s networks (apart from the game of the week on CBS), and plenty of those wind up starting on ESPNU or ESPNEWS thanks to overruns. But there’s far less outcry about that because even those lower-tier ESPN networks and their recent decreasing importance are well-known as a place for sports, and they have better distribution than FS2, even if only somewhat.

People are still likely to complain about games on Fox Business, because it’s not a traditional sports channel and not necessarily a channel they often go to. And that speaks to the challenges with Fox’s overall strategy; they have enough sports that they need overflow channels, but they haven’t been able to really establish FS2, whereas ESPN has established its secondary channels as acceptable places for a game to start. But that’s not really as much about the content of the Pac-12 (which, it should be noted, has deals with both ESPN and Fox) as it is about the broadcasting landscape.

In any case, Dodd’s column makes some larger valuable points about growing dissatisfaction with Scott’s leadership from school presidents, and a lot of that has to do with other issues like the Pac-12 Networks’ continued revenue and distribution challenges. There’s definitely an argument that decisions made there have hurt the conference, and that they’re falling behind other conference networks. It’s also notable that their revenue from ESPN and Fox is lagging far behind the Big Ten and the SEC despite the tonnage of top games given to those networks (part of the problem with the Pac-12 Networks).

It’s up for debate how much of that is on decisions made by Pac-12 leaders, and how much of it’s instead about the conference’s inherent challenges, including time zones, less overall fans, less incredibly passionate fans, and less interest from TV networks (largely as a result of those other factors). And it seems highly unlikely that some other points raised by Dodd (such as Kevin Sumlin closing spring practices at Arizona) have much of anything to do with conference strength. But there’s definitely an argument that the Pac-12 is falling behind its competition, and that the internal dissent against Scott is growing. That argument shouldn’t have much to do with part of one game winding up on FS2 thanks to another game’s overrun , though, especially when it’s been made clear that that situation won’t be repeated.