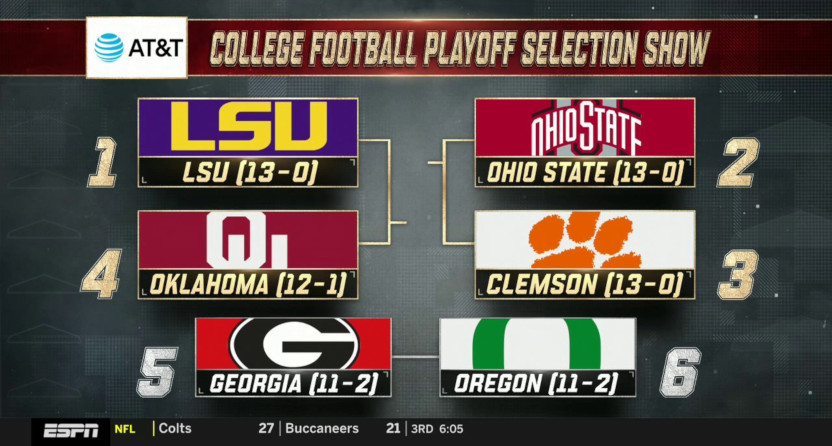 This week’s news that Pac-12 CEOs may be looking to hire a consultant who reports to them rather than to commissioner Larry Scott, and may have that consultant look at “the entire structure and composition of the PAC 12,” brings up some questions on what such a consultant might actually suggest. While an actual hired consultant would undoubtedly have more time and data than we do from the outside, and be able to analyze issues more specifically, it’s certainly possible to get at at least the broad strokes of the Pac-12’s current issues from here. Those issues break down into two major categories; things conference leadership (either current commissioner Scott and his team, or a new central team) can directly control, and things they can’t. And the things they can’t directly control look to be the bigger part of the problem.

The largest current issue facing the Pac-12 is poor recent performance in football, and to a much smaller degree, men’s basketball. These are the sports that currently drive most of the value of NCAA media rights packages, and while that may not be particularly fair to athletes in other sports and fans of other sports, it’s the way it works for the moment. And both of those sports are areas where the Pac-12 has recently struggled to succeed at the highest level.

Since the implementation of the College Football Playoff in 2014-15, only two Pac-12 teams have been chosen (Oregon in 2014-15 and Washington in 2016-17, with only Oregon winning their semifinal), and the conference has also only had one Final Four team (Oregon in 2017) in that span (with that Oregon team also losing their semifinal). And last year, the final CFP rankings (top six seen above, via Bryan Fischer) had Pac-12 champions Oregon sixth, and only included two other Pac-12 teams (#11 Utah and #22 USC) in the Top 25. At the moment, the Pac-12 doesn’t appear to have either a particularly dominant team or a strong slate of good teams.

And in last year’s final CFP rankings, each of the other Power Five conferences got a team in the playoff. And the Big Ten (six total ranked teams) and SEC (five) were well ahead of the Pac-12 in ranked depth. (The Big 12 had three ranked teams, same as the Pac-12, and the ACC only had 2, but one of those was #3 Clemson, which made it to the national title game.) So the Pac-12 is quite a ways behind its power conference peers over the past few years.

An upswing in Pac-12 football fortunes in particular would dramatically help the conference on a number of levels. For one thing, it might create some demand for the conference networks, which have plummeted in both fees and distribution. Putting key football games that people are interested in on conference networks is how the other conference networks have been successful, but while the Pac-12 has put some games there, most of the time, they haven’t seen great demand. And a big part of that is that many of the conference’s teams haven’t realistically been title threats for a while.

Beyond that, football success is important for securing a big next deal of media rights. Media companies are only going to pay big for a product that people want to see, and for the last while, the Pac-12’s football hasn’t been terribly nationally relevant next to other Power Five conferences. But fixing football isn’t really something the commissioner or the league office can do; it’s on the school administrations to hire better athletic directors and provide better athletic facilities, the athletic directors to hire better coaches and pay more for top coaches and assistants, and the coaches to recruit and coach better than they have been.

There are some things the league office could possibly do at the margins to enhance their football product. Those might include trying to arrange national spotlight games even at less-than-ideal times, featuring football on their network in a more comprehensive way than they have, making top players and coaches widely available for national interviews, and even just extending the availability of their highlights. But the football issue is primarily one that’s on the schools, and it’s not particularly easy for a consultant to fix it.

Related to the lack of football success is the next key problem; what appears to be lower fan interest in Pac-12 schools relative to other Power Five conferences. This is speaking only at a very high aggregate level; there are obviously many passionate fans of Pac-12 schools, and maybe of the likes of USC and Oregon in particular, and there are obviously schools in other Power Five conferences that don’t have massive football fanbases. But there hasn’t been as much demand for the Pac-12 Networks as there has been for other conference networks, and while some of that is on mistakes from the conference (the six-network structure, the refusal to partner with Fox or ESPN, and the failure to get a deal done with DirecTV), some of it seems to be just a lower baseline of interest.

Even if you swapped the Pac-12 Networks’ ill-conceived going-it-alone structure with the ESPN-owned SEC Network or ACC Network or the Fox-operated and partly-owned Big Ten Network, that wouldn’t necessarily put the Pac-12 ahead of those conferences. It would probably help the Pac-12 a bit, for sure; they’d likely be far better off on the network side if ESPN or Fox was involved to help with carriage deals. But conferences like the SEC and Big Ten might even be able to make the independent approach work better than the Pac-12 has thanks to greater demand for their product. The Pac-12 talked a big game with the launch of their independent networks, but they then found that people weren’t exactly leaving DirecTV in waves to go sign up for it.

And this extends beyond conference networks into late-night scheduling of Tier 1 games, something Pac-12 coaches love to complain about. The conference partly gets those games thanks to geography and ESPN and Fox wanting to fill those later slots (and being willing to pay for it), but it also partly gets those games because there isn’t seen to be a high viewer demand for many Pac-12 games, meaning they show up less in prominent earlier slots. If Pac-12 games started drawing bigger ratings from increased fan interest, or if the conference developed nationally-relevant football powerhouses (which would also bring increased fan interest), it would be easier to make a case for putting them in the prominent slots.

None of this is to say that the Pac-12 CEOs are wrong to consider hiring an independent consultant. In fact, it may be one of their smarter moves in a while, as there are certainly plenty of things a consultant could advise fixing. Those range from Scott being paid much more than many of his conference commissioner peers (and getting incredible perks) for doing a much-worse job than them, to the conference and networks’ bizarre high-rent San Francisco offices, to the networks’ dying vision and terrible distribution, to the variety of self-inflicted PR wounds the conference has seen during Scott’s tenure.

And cleaning up some of those things does matter to some degree. Better conference administration (and less embarrassments for the conference in particular) could make them a more desirable source of media rights. And a better network setup would help the schools’ revenue issues and the growing gap to other Power Five schools, and the revenue you get is a factor in hiring better coaches and assistants and improving athletic facilities. (Although, highly-paid doesn’t always equal great results, as Chip Kelly’s current UCLA tenure helps indicate.)

But while it’s absolutely worthwhile for the Pac-12 to examine their current approaches and their shortcomings, and to see what they can do to improve them ahead of the next crucial round of media deals, it’s worth keeping in mind that the possible improvements from a better network setup, a new commissioner, or even the current commissioner making better decisions are all really secondary compared to football success and fan interest (much of which comes from football success).

These areas still do matter, and they’re something (unlike football) that the conference’s leadership can directly control and affect. And it certainly makes sense to examine these areas and see if improvements can be made. But the biggest factor in how the Pac-12 does in its next media deals will likely be the appeal of its football product. And the conference leadership doesn’t have a whole lot of control over that.