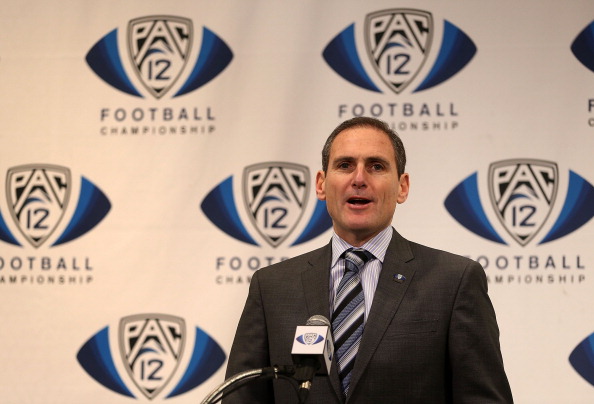 Larry Scott made headlines this week. Not for any kind of media deal he’s concocted to help grow the reach of the Pac-12 Network. Not because of a plan to help the conference regain its place in the college basketball landscape. And not because of anything to do with the 12 member schools counting on him to right their ship and keep them on pace financially with the other Power Five conferences.

Instead, Scott made headlines because he’s staying in a $7,500/night hotel suite while student-athletes play the Pac-12 Men’s Basketball Tournament in Las Vegas this week.

It has its own private elevator and 3,370-square feet of space. There’s a marble jacuzzi soaking tub in the suite, a fully stocked bar, and a powder room.

At least you get your money’s worth.

It’s a pretty tone-deaf move, even for a tone-deaf guy like Scott. But it seems as though Pac-12 athletic directors have gotten used to their commissioner’s extravagant spending, even as the Pac-12 Network fails to bring in the revenue to justify such expenditures.

The list of scandals and headaches under Scott’s watch is hard to keep track of. After taking over the conference with visions of worldwide broadcasting and billion-dollar deals, Scott has overseen unmet financial expectations, a stalemate with DirecTV, a questionable number of late-night football games, a basketball officiating scandal, a football officiating scandal, the UCLA shoplifting incident in China, diminishing returns on both the football and men’s basketball sides, and the continued failure of the conference or its network to measure up with their contemporaries.

And with every scheme Scott cooks up to try to right the ship and squeeze blood from this stone, it seems like the ADs have realized more and more that if they want the conference to get back on track, they’re going to have to handle this themselves.

That’s the gist of Jon Wilner’s San Jose Mercury News piece on Tuesday, which lays out the scenario currently in play. Following a heated meeting in October in the wake of the Pac-12’s instant replay kerfuffle, all of the AD’s frustrations were put on the table. Failed revenue projects, sagging Pac-12 Network numbers, the absurd spending habits of Scott and network executives, and the lack of control and direction they were afforded in guiding the conference all left them feeling like they needed to make a change.

According to the article, that shift has been in effect in the months since. Now, instead of letting Scott dictate policy like a monarch, the athletic directors are setting the tone and direction of the conference, along with the backing of their chancellors and presidents.

Previously, Scott would have separate conversations with ADs and with chancellors and presidents, which gave ADs the feeling they were being pushed to the side. Now, they’ve made it clear that they dictate to Scott what will happen, either specifically on the conference’s media advisory relationship with The Raine Group or generally when it comes to the rules of the league and network-related decisions.

Does all of this mean that Scott is on his way out as Pac-12 Commissioner? Not exactly, but then again this quote from Colorado chancellor Phil DiStefano isn’t exactly against the idea.

“(Scott) still has a contract with us. He’s the commissioner, and we’re working on things together. That’s something we’ll take up at another time. What’s really important now is moving forward with Raine.”

On paper, the conference is getting back on track, and the school ADs are the ones leading the charge. If they can keep the momentum going and perhaps get a few lucky breaks in the NCAA Tournament or elsewhere, it’s pretty likely that everyone is going to look around and wonder why Larry Scott still needs to be here. Maybe he should just hang out in his $7,500 hotel room for a bit to think about what happens next.