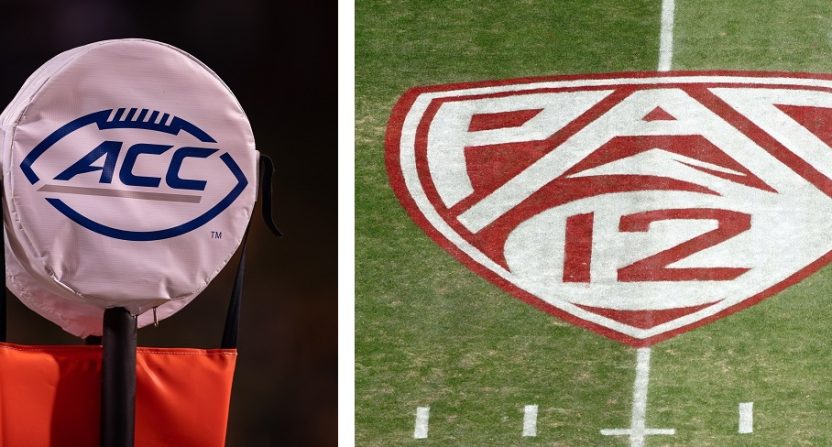 The Pac-12 on ACC Network? It may end up coming to that.

Per a report from Ross Dellenger and Pat Forde of Sports Illustrated, the Pac-12 and ACC are considering a partnership with ESPN that would bring late night football content that normally lived on the Pac-12 Networks to ACC Network or a renamed and reworked version of the channel.

The proposal, still in its infancy, heavily involves the ESPN-owned ACC Network. Under the plan, the ACC Network—or a renamed entity combining the two leagues—will have exclusive rights to broadcast Pac-12 games to West Coast households through ESPN cable providers. The agreement is not a merger or consolidation of the leagues but is instead built around a media rights agreement with the worldwide leader in sports—an effort to clap back at the Pac-12’s loss of USC and UCLA to the Big Ten.

While the joint move could feature marquee nonconference matchups from the West and East Coasts—think Clemson-Washington or Miami-Oregon—the primary reason behind the partnership is the TV property. This would replace the failed Pac-12 Network with a reliable provider that can reach millions of homes out west.

It sounds wild, but it actually sort of makes sense (aside from the weird turn of one conference’s games airing on another conference’s network). The ACC Network would get some extra game inventory. The financial quagmire that is the Pac-12 Networks would be no more. ACC Network, which hasn’t faced the carriage battles that the Pac-12 Networks have thanks in no small part to the negotiating might of Disney, would become more attractive to west coast cable and satellite providers far outside of the ACC’s footprint. ESPN+ would be a natural landing spot for the Pac-12’s Olympic sports. Additionally, striking a deal with the Pac-12 would allow ESPN to maintain their inventory of live events and keep a foothold on the west coast, while getting any sort of long-term deal done with a major company would generated a sigh of relief from the Pac-12 (which is ready for its next media rights deal).

The ACC would have a significant part to play in this deal getting done, and it seems like they might have the most leverage. The conference’s 14 schools would have zero desire to split the same pie 20 or 24 ways unless the Pac-12’s TV deal with ESPN would significantly increase the size of the pie. And even then, I really can’t see the ACC’s current members wanting the Pac-12’s schools to have the same cut from whatever we’d be calling the ACC/Pac-12 Network hybrid. Or maybe the Pac-12 wouldn’t even get anything from their games airing on ACC Network, and ESPN would kick some more money to the ACC as appeasement.

For the Pac-12, the partnership may be the best possible solution to retain its remaining members, but is it worthwhile for the ACC? It’s unclear exactly how much additional revenue the league would generate from such a move. But any extra dollars are a plus, given the ACC’s long-term TV contract limbo. ACC members are estimated to receive far less in media rights revenue than their competitors’ new deals in the Big Ten and SEC. The ACC is locked into the deal through 2036.

The new partnership with the Pac-12 may not reopen the contract, but it will change the bottom line. That might be the best option for the ACC, because a complete renegotiation of the contract could open a path for the league’s most valuable properties—North Carolina, Clemson, Florida State, Miami and Virginia—to explore leaving. As it stands, escaping the ACC’s grant of rights deal could be both costly and complicated.

I really have no idea how much of a chance of this happening there is, but the more I think about it, the less completely off the wall it sounds. In theory, it makes sense. But in actuality, it’s quite complicated with a lot of moving parts and hurdles, and those might be too great to overcome.