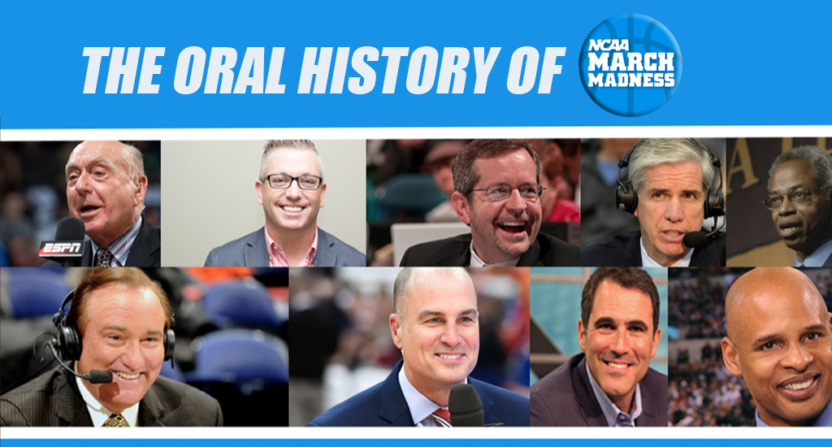 Throughout its 79-year history, the NCAA basketball tournament has seen bracket changes, improvements in technology and countless upsets. Take an inside look into the preparation, the moments and the memories from college basketball’s leading sports media professionals.

Students from an Auburn University advanced sports reporting class connected with these pros to produce a roundtable/oral history of March Madness. Here are the broadcasters and journalists who shared their insights with the students:

Tim Brando. Play-by-play with CBS Sports from 1996-2014, including the NCAA tournament. Currently with FOX Sports and Raycom.

Michael DeCourcy. College basketball columnist for The Sporting News. Previously wrote for the Cincinnati Enquirer, the Memphis Commercial-Appeal, and the Pittsburgh Press.

Dick Vitale.  College basketball broadcaster for ESPN since 1979. Coached University of Detroit to the NCAA tournament in 1977.

What do you remember about playing in the NCAA tournament that you think about as a broadcaster?

Len Elmore: One thing I think about is that the opportunity doesn’t come easy, and you can’t take it for granted, especially during the days when I played because the rules for entry were you had to win your conference tournament. We went one year, but my senior year we were one of the best teams in the nation, maybe top two or three, but because we lost in our conference tournament in overtime to the No. 1 team in the nation, we didn’t get to go. Obviously as unfair as that was, they changed the rules and expanded the field, but it didn’t help us any.

Jim Spanarkel: I remember the fact that I played in it and we had a lot of fun getting into the Final Four and then getting in the championship game and about how much perseverance it takes, but also a little bit of luck, to being able to win enough games to get all the way there. What I think about when I’m doing games is that it could be the last game for anybody on the teams; it could be a senior or someone going to the NBA. Having this in mind, I try to put the experience that I had and hopefully transmit that feeling to the audience when I’m broadcasting.

Jay Bilas: I don’t think about my playing while I’m broadcasting. Maybe that is part of my makeup, but I don’t look back to 35 years ago, or whatever it was. I’ve been doing this for so long that it is pretty much a distant memory with regard to how I process information now. I think my experience in coaching in it and playing it is helpful on how I view it, but there is rarely a time I look back and think, ‘Well hey, you know, when I played, you know.’ I don’t do that very often.

What do you remember most about the first game that you covered?

Kellogg: It was exciting to be a part of the coverage. The NCAA was producing the games at that time. The general excitement, the whole one and done dynamic. If you win, you move on, if you lose, that’s the part of what makes it memorable and exciting for everyone. The thing I remember was probably just being able to be a part of a team that was bringing the game to viewers wherever they happened to be.

Seth Davis:  I was a student at Duke working for the student newspaper in 1991 and I remember taking a trip to Minneapolis to cover the team in one of the early rounds. The coolest thing is that first week, that first site, you would have eight teams there. Maybe six of the eight were unfamiliar and not used to the coverage. You could dive into those teams and their stories and bring those to the floor. As the tournament goes on, the sites get bigger, there’s more writers, and everyone’s chasing after the same bread crumb as opposed to that first week where you have the whole place to yourself.

Dick Vitale: My first game was awesome, baby! It was DePaul and Wisconsin in 1979, and I knew nothing about television. I wanted to get back into coaching. I decided to take the TV job when ESPN asked me to do their first college basketball game. They had seen me when I coached at Detroit in the NCAA tournament against Michigan. [Then-NBC sportscaster] Curt Gowdy and [then-NBC head of production, soon to be ESPN’s first vice president of sports programming and operations] Scotty Connal saw me that day. Scotty Connal wrote my name down and when ESPN hired their first sportscaster, it was me.

It was a thrill, but I didn’t know much about T.V. I got there a half an hour before the game and the producers were yelling “Why weren’t you here earlier? You missed the production meeting!” It was pretty wild, but I guessed I’ve fooled them for years.

Tim Brando: I do have an incredible story that almost happened in my first NCAA tournament in 1996.  A No. 16 seed has never beaten a No. 1 seed, but there is a small school in the Appalachians of North Carolina, in a town called Cullowhee, called Western Carolina. They had won their conference tournament and came to the NCAAs as a 16 seed.  They were playing top-seeded Purdue out of the Big Ten.

A kid from Western Carolina took a shot to win the game from three-point range and he missed it — came off the back iron. Then he got his own rebound and took another shot to tie it and send it to overtime. It went off the back rim again and the ball came right back to him. He got three chances to tie the game and one chance to win the game, both shots looked pretty good where we might’ve seen history. We might’ve seen the first No. 16 seed ever to beat a No. 1. It didn’t happen, and it still hasn’t happened.

I don’t think that it ever came closer than that night in Albuquerque and doing that game. In those days, we were on in other parts of the country. They were coming on to see this incredible upset and I remember vividly, the adrenaline flow and how much emotion I had knowing that the rest of the country was coming to see this potential big upset. 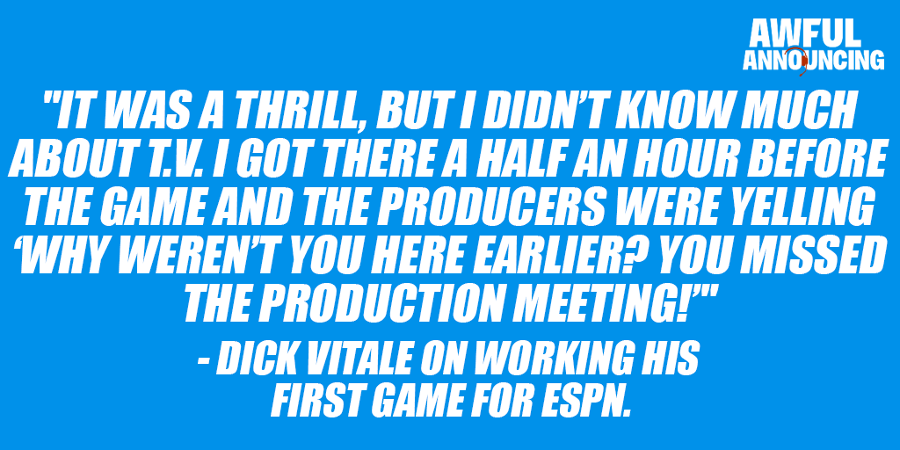 Bilas: I don’t remember. My first tournament game was on radio, so I don’t even remember who played. I didn’t look at it like I was walking on the moon or anything (laughs); it was a little less important back then.

Michael DeCourcy:  There’s been a lot of tournament games between now and those games, haha. What I do remember is that we [at the Pittsburgh Press] had an idea, we wanted to do a story on the number 64 team in the tournament. It happened that Temple was ranked number one, and this was before they actually seeded them 1 to 64, so we decided that whoever played the number one team was number 64 for the purpose of our story, and it happened to be Lehigh.

Lehigh is in drivable distance from Pittsburgh, and the coach was Fran McCaffrey, who is now at Iowa. He was 28 years old, a year older than I was. He graduated a year ahead of me and he was already a head coach, and they were in the tournament. They were a really good team, and it just so happened that they were recruiting a player from Pitt at the time, so when I asked if he would let me in on his prep he said “Yeah, sure.” Because they got a full page in our Sunday paper talking about Lehigh.