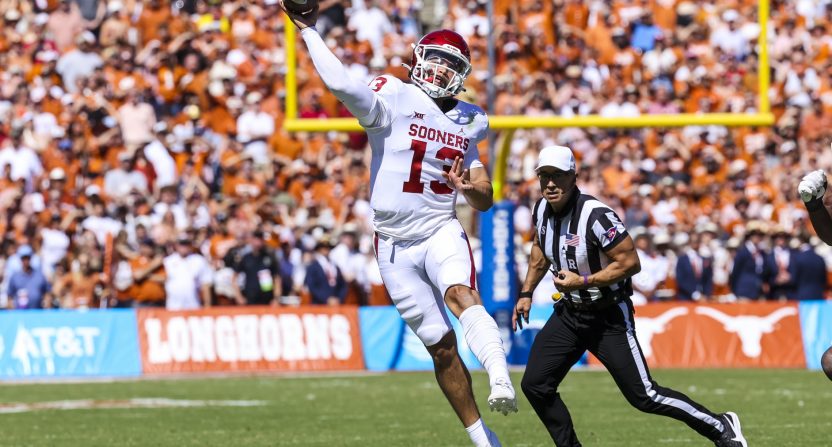 The Oklahoma quarterback position was thrust into flux this past weekend after Caleb Williams dragged the Sooners to a 55-48 comeback with over Texas. Neither Williams nor Spencer Rattler, the quarterback he replaced, talked to reporters after the game, and head coach Lincoln Riley didn’t name either QB the starter earlier this week.

On Tuesday, the OU Daily watched the team practice from a neighboring building, and reported that Williams got the bulk of the snaps with the first team.

The Daily watched the offensive practice regimen from a public building near the OU football practice field, with no athletics employees discouraging observation. The Daily does not observe practice regularly, but did so Tuesday under heightened interest given the situation.

Williams outsnapped Rattler 15-7 in the pre-stretching portion of practice. He was later seen primarily scrimmaging with starting receivers Jadon Haselwood, Marvin Mims and Mike Woods, while Rattler threw to backups Trevon West, Brian Darby and Jalil Farooq, among others.

On Wednesday morning, KOCO reporter Carson Cunningham reported that Oklahoma had cancelled all of its media availability on Wednesday, and that no one would talk until after Saturday night’s game with TCU.

OU football has canceled all media availabilities today. No reason given. No more media until after Saturday's game.

Weirdly, the Sooners football program attempted to evade any similar observations of practice a year ago, when the university blurred dorm room windows that faced the practice facility. I guess they forgot to take care of that other building.

To be clear, Oklahoma didn’t specifically cite the OU Daily reporting as the reason for the cancellation of the media availability, but it’s not hard to draw a straight line between the two events.

I totally understand Riley wanting to maintain some semblance of a competitive advantage, but all he’s done by refusing to name a starter, and now cancelling media availability, is dump more fuel on the fire. People aren’t suddenly going to stop giving a shit about the Oklahoma quarterback situation because there’s no media availability before the game on Saturday. But hey, no one still knows who’s going to start against TCU, so at least we’re in the same place as we were earlier this week – just with some extra college football ridiculousness.