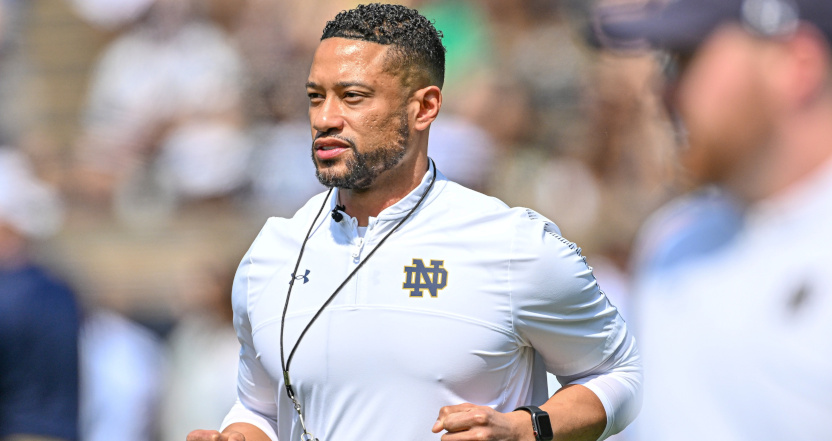 This college football offseason has seen a lot of coaches taking public shots at other coaches and institutions, particularly Alabama’s Nick Saban, Texas A&M’s Jimbo Fisher, and Jackson State’s Deion Sanders. Public shade at rivals has always been a thing, as Steve Spurrier’s career (amongst others) illustrates, but this offseason has seen it seemingly dialed up over the past few years. And it’s in that context that Notre Dame coach Marcus Freeman’s comments on Ohio State (his own alma mater) were taken Tuesday when they were published as part of a feature on Freeman by CBS Sports’ Dennis Dodd. But Freeman (seen above at the Fighting Irish’s spring game in April) has now claimed he was misquoted and taken out of context, and CBS has changed that story (without an editor’s note) to add the vital “If” Freeman said Dodd left out. Here’s how Dodd’s piece initially read Tuesday:

“I’m not saying from top to bottom, but the majority of our kids, they — I want to say this the right way — are pushed to learn and their study habits are formulated every day,” said Freeman. “You can’t cheat academics at Notre Dame.”

To make his point, Freeman brought up the two most significant football stops in this career before coming to Notre Dame in 2021. At Ohio State, Freeman played defensive back for Tressel, eventually becoming a fifth-round NFL Draft choice of the Chicago Bears. At Cincinnati, he earned a reputation as one of the nation’s best defensive coordinators.

“You don’t go to class [at places like that]? OK, take some online classes, show up for your appointments. At Notre Dame, you’re forced every day to go to class.”

And here’s what Freeman told his former Buckeyes teammates Bobby Carpenter and Anthony Schlegel on Columbus’ 97.1 The Fan Wednesday, as relayed by Bill Rabinowitz of The Columbus Dispatch:

Wednesday, Freeman said he used the comparison only to contrast Notre Dame’s limited capacity to have online classes as a much smaller school than Ohio State or UC.

“I wanted to set the record straight in that I was misquoted by Dennis Dodd in this article, and key words and context were missing from the quote that upset a lot of people that I care about,” Freeman said. “I’m very proud of my two degrees from Ohio State. I would never discredit the quality of education those degrees represented.”

He said the CBS Sports story left out the word “if” at the beginning of the sentence referring to attending class. CBS Sports has subsequently changed its story to add the word to the quote.

“When you see a quote that says Marcus Freeman says, ‘You don’t go to class at a place like that,’ that changes the entire narrative, right?”

He said he was making the point that Notre Dame, with an enrollment of about 8,500, didn’t even offer online classes until COVID. Even now, he said, such classes are more limited than at large public universities such as OSU or UC.

This situation is not entirely about Dodd leaving out that “If.” Even if Freeman’s quote had been relayed with that in, it still would have raised some eyebrows and generated some discussion. If Freeman was truly trying to discuss Notre Dame’s limited online offerings relative to those other schools, he should have spelled that out more explicitly (and he should have discussed why he feels in-person classes are superior, and why he called attending online classes “not going to class”). But leaving out the “If” escalated the furor over this dramatically. It made it sound like Freeman was saying that most Ohio State players don’t currently attend in-person classes, and even perhaps that Buckeyes’ players didn’t often go to class when he played there (2004-08, a time with many less online offerings everywhere). The full and accurate quote still would have caused some blowback, but not as much as Freeman received here.

Quotation mistakes happen, especially around small words. But this situation illustrates that the right small word in the right place can dramatically change the meaning of and the reception for a quote; as Freeman said, “That changes the entire narrative, right?” And in this particular era where so many coaches seem to be willing to take public shots at other coaches and schools, and where those shots receive so much discussion and analysis, this is a good reminder for writers to be incredibly careful with transcriptions of coaches talking about other institutions. Coaches themselves still need to be careful with what they say, but they should be able to at least count on what they say being reported accurately.