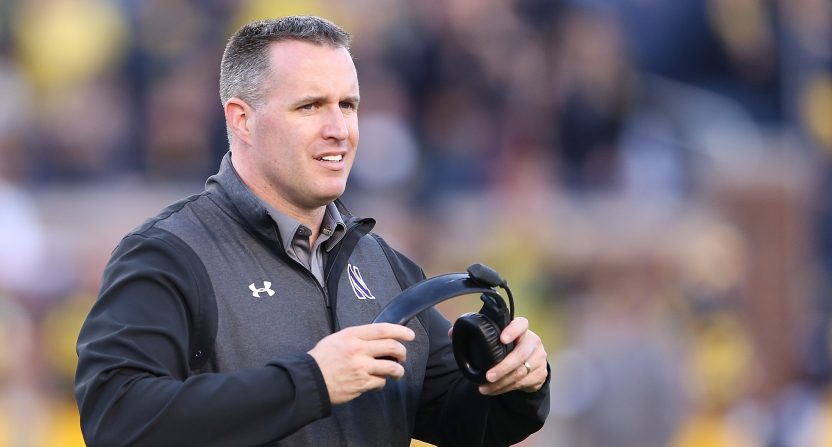 According to the Chicago Tribune, Northwestern coach Pat Fitzgerald called the schedule change, “great news.” Via the Trib:

Fitzgerald has been strongly opposed to Friday games because they can detract from high school football and disrupt his players’ class and practice schedules. Many NU fans also were outspoken in their opposition, citing Friday work schedules, traffic and the inability to have enough time to tailgate.

The league listened, with a Big Ten source saying it heard from university leadership at Northwestern regarding all the “unintended consequences” that accompany Friday night games.

In November, Big Ten commissioner Jim Delany announced that the league would play six football games on Friday nights during the upcoming season, with the contests broadcast on ESPN and FOX. The decision was widely seen as a play for television ratings on a night when there’s no other college football on.

Immediately, many of the conference’s schools spoke out against the change, with Michigan and Penn State flatly refusing to play Friday night games and other schools saying they’d play them only over Labor Day weekend.

When the Friday night schedule was released days later and Northwestern was slated for two Friday night bouts—Oct. 14 against Maryland and Oct. 28 against Michigan State—Fitzgerald was displeased.

“I didn’t get a say in whether or not we were playing on Fridays. I don’t think any of my 13 brothers did either,” Fitzgerald told reporters, according to Coaching Search. “The other head coaches, I don’t think we had a vote. It wasn’t ever discussed with us. I get it. I understand it. It doesn’t mean I have to like it. But I know my role, and I’ll coach the team.”

Well apparently Fitzgerald got his say after all.

Friday night games represent a tradeoff for schools. On one hand, they get some extra exposure by playing on national TV in the only major college football game of the night. On the other hand, playing on Friday can be inconvenient for fans and players and impede on the sacred tradition of high school football on that night.

Some teams will surely decide they want to play on Fridays and many others will decide they don’t. It doesn’t sound like the Big Ten used a very collaborative decision-making process when they first made this change, but at least the conference seems to be taking feedback.