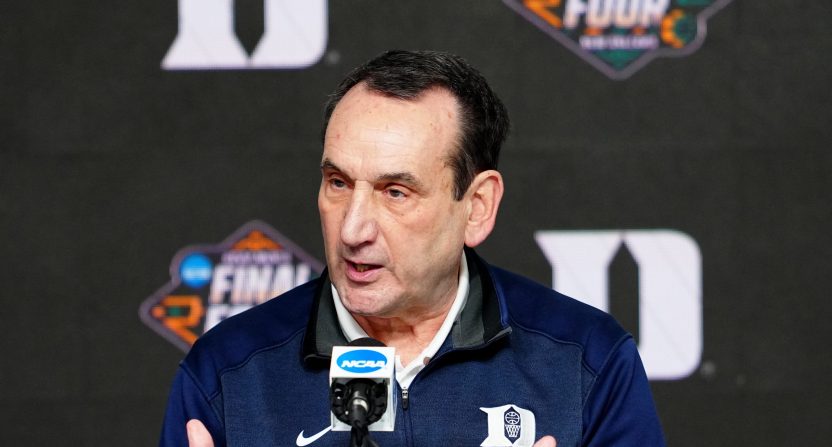 NEW ORLEANS — The last dance of Coach K reaches a degree of such made-for-TV drama as it enters its Final Four act, it almost feels scripted.

By now, you probably know the backstory: Mike Krzyzewski’s Duke Blue Devils have reached this stage of the NCAA Tournament 13 times now in his illustrious career. Since the 1980-81 season when Krzyzewski first arrived in Durham from Army West Point, bitter rival North Carolina has qualified for 14 Final Fours.

Yet only once have the two bellwether programs of modern college basketball been in the same Final Four, and they’ve never played on this stage.

For fans of the game, a Duke-Carolina Final Four is a dream match in any context. For TBS, it should be a ratings bonanza.

A contest airing on cable drawing more eyeballs than network TV has to be encouraging for Turner, which has drawn predictably lower ratings on TBS than Final Four broadcasts on over-the-air CBS. The last TBS national title game between Villanova and Michigan in 2018, for example, garnered a 9.2 rating.

Bookending it were CBS broadcasts of Gonzaga and North Carolina in 2017 with a 13.2, and Virginia vs. Texas Tech in 2019 with an 11.6. The same has held true for semifinals, with the most recent such TBS games — Michigan-Loyola Chicago and Villanova-Kansas — garnering 7.2 and 6.8 ratings, compared to 9.1 and 7.6 the next year on CBS for Texas Tech-Michigan State and Virginia-Auburn.

Never mind putting up the best semifinal numbers ever on a TBS broadcast; Duke-North Carolina on its own has the potential to be the most-watched semifinal since the double-digit-rated contests of the first half of the 2000s.

That was also an era when another rivalry, Yankees-Red Sox, took center stage in Major League Baseball. Like the Boston vs. New York baseball feud, Duke-North Carolina is ultimately regional but transcends its own patch of the country.

And the Blue Devils-Tar Heels rivalry has done so without a high-profile postseason series like those between the Yankees and Red Sox that dominated Octobers two decades ago. Add Saturday potentially marking the end of Krzyzewski’s career, and an already-perfect television event adds an irreplicable splash of real-time history.

“I think it’s really just the legends that come out of each school,” said Charlotte native Wendell Moore Jr. “When you’ve got guys like Grant Hill, Christian Laettner, Kyrie [Irving], Jayson Tatum, Justise Winslow, Quinn Cook, it’s hard not to like them.”

While the basic sentiment is correct – both Duke and North Carolina have indeed produced many of the biggest names in college basketball for over 40 years – Moore’s claim that “it’s hard to like them” may raise eyebrows.

It’s not exactly a secret that Duke has long been the program other fan bases set aside their own differences to cheer against when the occasion comes. Different generations have had their own avatars for Blue Devil-hating:

Jason Williams tackling Jason Gardner to no call in 2001.

And the assistant coach named to take up Krzyzewski’s mantle next season, Jon Scheyer, became one of the earliest sports memes of the social media age for what was popularly dubbed “Scheyer Face.”

And the one constant through all those moments has been Coach K. Audience fascination with Duke basketball comes in no small part from haters.

Of course, he also has his supporters. Moore said that growing up in Charlotte, he was the one among his friends who cheered for the Blue Devils while the others were Tar Heel supporters.

A.J. Griffin is indicative of the nationwide reach of the rivalry, citing the Jahlil Okafor-led 2015 team for sparking his interest in the program.

Long before any of the current Blue Devils were born, and before Duke was viewed as the villain anywhere outside of Chapel Hill, Krzyzewski’s first national championship-winning team came into the Final Four the ultimate underdog.

The 1990 Blue Devils lost a 103-73 laugher to UNLV in Denver, the culmination of nearly two decades of building in Las Vegas under Jerry Tarkanian so precise, it would make architects of The Strip’s casinos jealous.

Tark’s 1991 Runnin’ Rebels were even better, coming into the Final Four undefeated and substantial favorites against Coach K’s Blue Devils. The 79-77 stunner changed the entire landscape of college basketball.

“We actually watched that game [recently],” Griffin said. “One thing coach said…after that loss [in 1990] was ‘next play.'”

In other words, turn the page.

The UNLV rematch resonates in 2022 not just as a milestone in Krzyzewski’s career, but as a mantra for meeting North Carolina. The Tar Heels’ 94-81 win at Cameron Indoor Stadium on March 5, which spoiled Coach K’s home finale and drew that impressive rating for ESPN, renders the semifinal a revenge game, a rivalry game, and a historic event.

Love K or don’t, there’s no questioning the importance he’s had on the most-watched years of the game. Moore offered maybe the best summary.

“It starts with coach. Coach is such an influential figure on everybody around the world,” he said.

His influence and his success guaranteed this Duke season would come under the proverbial microscope more than any other.

Documentarians chronicled the events of North Carolina alum Michael Jordan’s 1997-98 season with the inkling it would be his final season — or at least, final with the Chicago Bulls — but not with certainty.

Krzyzewski’s retirement announcement in the previous offseason guaranteed a Last Dance the world wouldn’t need to wait 20 years and a global pandemic to follow.

And what more perfect beat could this Last Dance follow than Blue Devils vs. Tar Heels one last time?