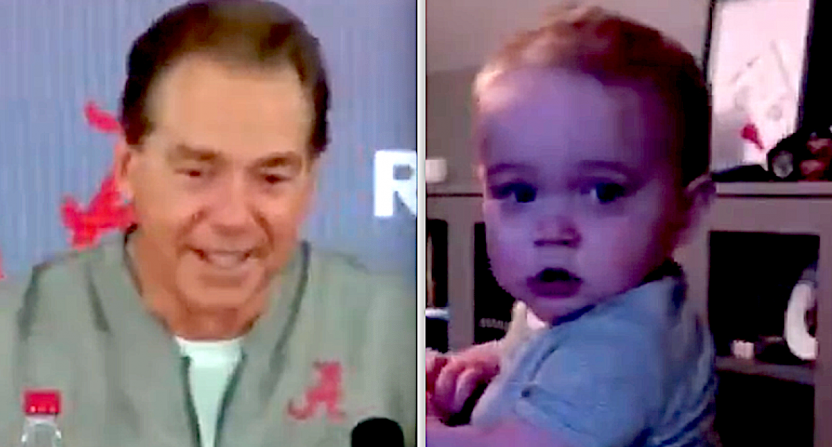 Holding press conferences over Zoom is still a reality as the COVID-19 pandemic persists. While that’s not the way any media would prefer to cover such events, it does allow reporters to do their work from home. (Sometimes, even from bed.) And sometimes, especially for parents of young ones, that is absolutely necessary.

We saw a great example of that Wednesday while Alabama coach Nick Saban held his weekly presser. The Athletic’s beat reporter Aaron Suttles had to stay home with his baby son while his wife was working. In a twist on “Bring Your Son to Work Day,” Suttles held his child as he asked Saban a question about Henry To’oTo’o and the linebacker adapting to the Alabama scheme in his first year with the Crimson Tide after transferring from Tennessee.

It was probably a good question and Saban might have offered an insightful answer. But the coach couldn’t ignore Suttles’ baby taking part in the press conference. Look at that kid; he’s adorable! (And he just had a birthday, progressing from infant to toddler.)

“This is the best behavior I’ve seen you on since I’ve been here,” Saban said with a wry smile. “If this is the way it’s going to be, I’d like for him to be there all the time.”

Suttles apologized twice for having his baby with him and yes, that created an unusual situation. But he shouldn’t have apologized for being a dad. (Saban even said so!) For one thing, it could’ve been worse if he left his son in a crib or play pen nearby and the kid started crying for attention. Holding him obviously kept the baby settled down and well behaved. What a good baby!

Or perhaps the kid was so in awe of Coach Saban that he knew not to make any noise. If the child had asked a question, would he have addressed Saban by “Coach” or “Nick”? (Remember when Birmingham TV anchor Rich Karle made that a thing?) But maybe just don’t let the kid face Saban at halftime.

Well, this is a moment for which little man will one day laugh at me.

Thanks to Coach Nick Saban for showing me some graciousness as I was forced to pull dad duty during his press conference tonight. https://t.co/9foo8T6Gp9

As Saban alluded to, Suttles has covered the Crimson Tide for more than a decade for the Tuscaloosa News and The Athletic. He also attended the University of Alabama and presumably covered the football program as a student reporter.

But really, what this moment gave us was a nice bit of humanity in what can often be a contentious relationship between coach and media.

Sure, there has to be some familiarity with reporters who have covered the team for as long as Suttles has, creating a workplace dynamic. It’s nice to see real life make an appearance in a press conference setting as well. Many of the people involved have families and considerations outside of work and it was gratifying to see Saban acknowledge that.

Yet it would be even funnier if Saban had a baby bottle on his podium next week alongside those Coca-Cola and Dasani bottles.