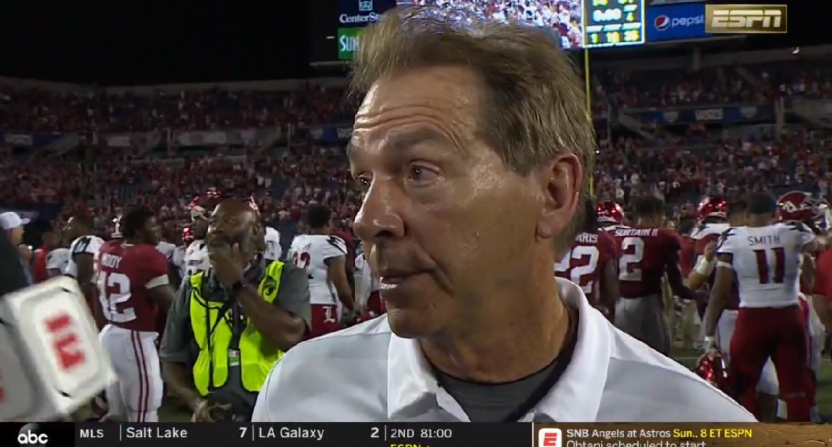 The Alabama Crimson Tide drilled Louisville 51-14 last night to open up their likely-dominant season. The main headlines after focused on Alabama coach Nick Saban’s answer to a question about his quarterback situation from ESPN reporter Maria Taylor. That answer was defensive to the point of offensive, with Saban angrily accusing Taylor of trying to get him to criticize one of his two starting-caliber quarterbacks.

“I still like both guys. I think both guys are good players, I think both guys can help our team, alright, so why do you continue to try and get me to say something that doesn’t respect one of them? I’m not going to, so quit asking.”

Saban himself apparently realized he crossed a line, because he called Taylor to apologize last night, as reported by James Miller and confirmed later by ESPN.

It never should have gotten to that point, though. Taylor was just doing her job, first and foremost; Alabama is the best college football program, and the most memorable game from last season featured Saban yanking Jalen Hurts at halftime of the national championship game, leading to Tua Tagovailoa taking the reins and beating Georgia in a thriller.

But moreover, Taylor’s question was in no way a “Gotcha!” attempt to get Saban to denigrate one of his two quarterbacks. That Saban took it that way says a lot about how he analyzes his players; if he didn’t care to give a real answer, he could have easily gone with “It’s a good problem to have!” or any number of other usual responses.

Saban apologizing is certainly better than Saban not apologizing, but it’s tough to reconcile moments like Saban’s explosion at Taylor with the long (and very good) profiles we get of Saban as the wise family man. At a certain point, what we see is what we get.