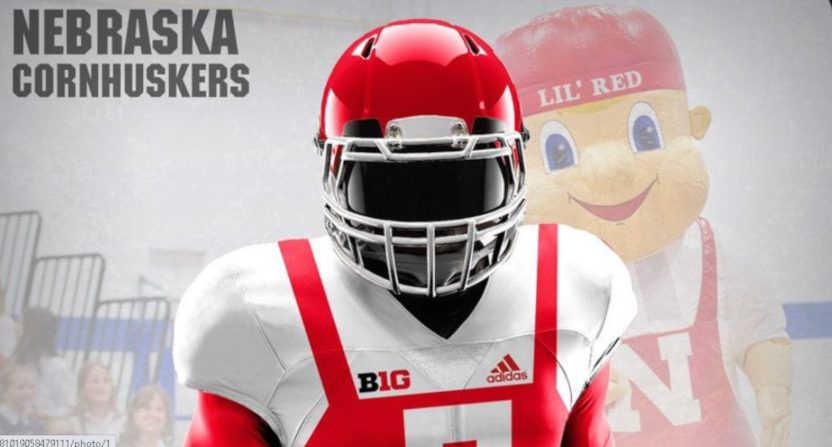 One of the most remarkable things in college football is how much attention gets paid to reports from unusual sources. Yes, every once in a while, an obscure site, local subscription site writer, or local radio host is ahead of the game on a major move, but there are many more misses than hits there. The latest case is a supposed mockup of overall-style Nebraska uniforms, first tweeted by “@QB1TATT00” (a “Gutsy QB Twitter Account that makes Videos, Gifs and images,” with 8,495 followers as of 8 p.m. ET Wednesday) Tuesday night. As John Buhler wrote in a piece at FanSided Wednesday morning, “This was a troll job that originally started as a joke on Reddit among Nebraska fans a few years ago.” But that didn’t stop countless big accounts from sharing the original tweet without looking into it, sometimes adding some level of skepticism, but sometimes not. Here are some of those:

Please, please tell me this isn’t real ⁦@dannykanell⁩!! Don’t do it #Huskers!! Don’t do it!! pic.twitter.com/NEapwbSf6O

I want this to be real. I really do. It’s so awful. Someone make this happen. ? pic.twitter.com/AJzrAzu7vo

If this report is true it’s a good thing I’m not calling this game. @HuskerFBNation is still a brand, and this outfit? Chews up its tradition and spits it out! If anything a “throwback” uni given the 50th Anniversary of the Game of the Century would have been the better call! ?‍♂️ https://t.co/16lhZRiIXC

On the Dvoracek (an ESPN college football analyst) front, he and Danny Kanell actually spent quite a while discussing this on ESPNU Radio Wednesday:

One thing that really contributed to the spread of the original tweet from “Baker” was the tweet from @CFBHome quoted in Brando’s tweet above. @CFBHome has almost 54,000 followers (again, as of 8 p.m. ET Wednesday), and some of that is because of that Twitter handle. “@CFBHome” sounds reliable, so it makes some sense for a digital site to snap it up, similarly to how Bloomberg grabbed the likes of “@business” and “@technology” in the early days of Twitter.

But that handle is actually just linked to @FifthQuarter (which itself only has 13,600 followers). And while the Fifth Quarter website has plenty of articles on college football and other sports, its “Contact Us” page is only an email form, and nothing on that site suggests they’re a go-to source for original reporting. So just because @CFBHome tweets something as news, that doesn’t necessarily mean that it’s real.

And, to be fair, the @CFBHome tweet here didn’t claim original reporting. It attributed the report to “Baker.” But the particular phrasing there made it look like they were treating this as credible rather than a troll job. And because of the amount of people who follow them, that led to a lot of people taking it seriously and passing it on without much investigation. And that eventually meant that Nebraska athletic director Trev Alberts had to send out a tweet refuting this:

Hate to break it to everyone.

There won’t be any overalls on our football uniforms this season.

Lil Red will not be taking questions at this time, please respect his privacy.

This is far from the first time a troll account has duped people on Twitter. This often happens with various impersonations of actual newsbreakers or sports figures, and it sometimes leads to incorrect on-air coverage. But something that’s interesting about this case is that it didn’t come from someone simulating an actual newsbreaker’s Twitter identity; rather, it came from a pretty random Twitter account, was amplified by a bigger account without any checks, and then spread across the internet. That’s similar to what we’ve seen with some past fake reporter accounts. And it’s a further indication of why it can be valuable to look into something before passing it on to a wide audience.