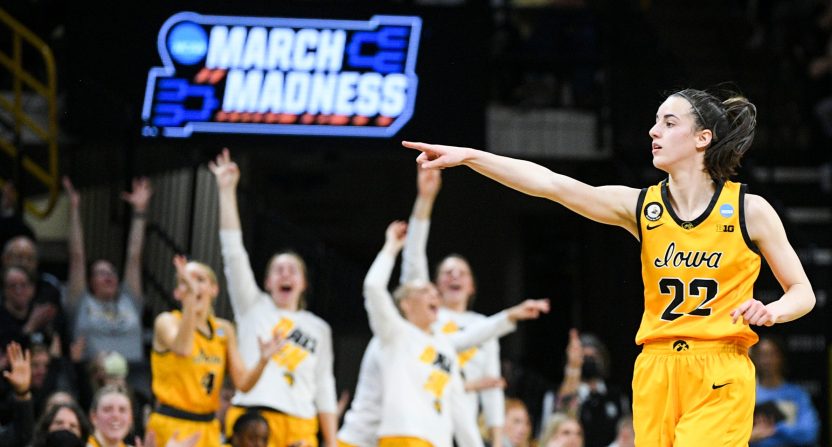 The COVID-19 pandemic shined a spotlight on the inequalities at play in many aspects of American life. In the sports world, the disparity between men’s and women’s college basketball had never been starker than during last year’s March Madness when both tournaments were held in singular locations, making it easy to compare and contrast.

Revelations included men’s teams getting better access to PCR tests at a time when testing positive for COVID was the difference between playing and getting kicked out of the bubble. But there was no difference starker than the one presented by Oregon women’s basketball player Sedona Prince, who posted a social media video that contrasted the shocking differences between the weight room provided to men’s and women’s basketball players.

That kicked off a discussion about the way women’s college basketball is treated as an add-on while men’s basketball gets all the financial benefits. While many fans said (and continue to say) that it’s because the men’s game attracts viewers and the women do not, that was undercut by the findings of an NCAA-commissioned gender equity review.

The report found that the NCAA was, amongst other things, “significantly undervaluing women’s basketball as an asset.” It noted that while the women’s tournament is often overlooked because of a perceived lack of TV value, that lack of TV value came from the NCAA bundling it with 28 other championship events rather than letting it stand on its own like the men’s tournament. Not to mention that the women’s tournament did not have the ability to use the “March Madness” for branding, with the NCAA reserving that for only the men.

The March Madness branding has been added to the women’s tournament starting this year, but most of the other suggestions, including putting both the men’s and women’s Final Fours in the same location, don’t appear to have gotten much traction. The NCAA doesn’t seem too intent on moving the start of the tournament so that it doesn’t conflict with the men’s either.

But while changing the branding so that it matches the men’s tournament might be a start, it’s not much when you get down to it. It’s literally the least the NCAA could do. And some of the most prominent names in women’s college basketball have continued to speak up even as last year’s attention over these issues has died down.

What do these people think is the best solution for helping incentivize the women’s game? Give them more money.

“The units,” South Carolina coach Dawn Staley recently said when discussing tournament finances. “Like men’s basketball, they get units, and those units equal dollar signs. I would like for us to divvy it up like the 68 teams get (their money) divvied up once the tournament ends.”

The NCAA gives each men’s team in the NCAA Tournament a “unit,” currently valued at $338,210.96, for every tournament game they play. That money then goes back to the school’s conference. Meanwhile, women’s teams don’t get this, due to that bundled TV package that the NCAA has with ESPN. But if the NCAA valued the women’s tournament correctly, it could make a ton more money than it makes now, according to independent studies. That means some of that money could be given to the participating teams in the same way.

Staley isn’t the only coach who sees that the disparity continues. Stanford head coach Tara VanDerveer wants to see women’s college basketball sold as a solo TV entity as well.

Tara VanDerveer is asked if she has seen substantive changes in this year's NCAA Tournament in terms of equity.

Makes calls for a performance fund similar to the men's tournament and the solo TV package.

“To really make changes we have to have similar unit structure,” said Vanderveer when asked about substantive changes over the last year. “I love the crowds. I love the signage. I don’t really notice it. It doesn’t feel like that much is different.

“I think really the bottom line is it’s a television package and it’s a unit structure. When that happens, then we’ll know it’s serious.”

The package deal with ESPN ends in 2025, which means it might still take a few years. However, the NCAA will have the ability to single out women’s basketball and cut a new deal like the one these coaches and so many others want. In the meantime, the governing body appears fine to do window dressing on the problem. But that’s not really going to make people feel like actual change is happening until they start to see the benefits of all that value they know exists.

Echos what Dawn Staley said after the first round. Real equity comes from paying women what they earn. https://t.co/RY5VLD34bn