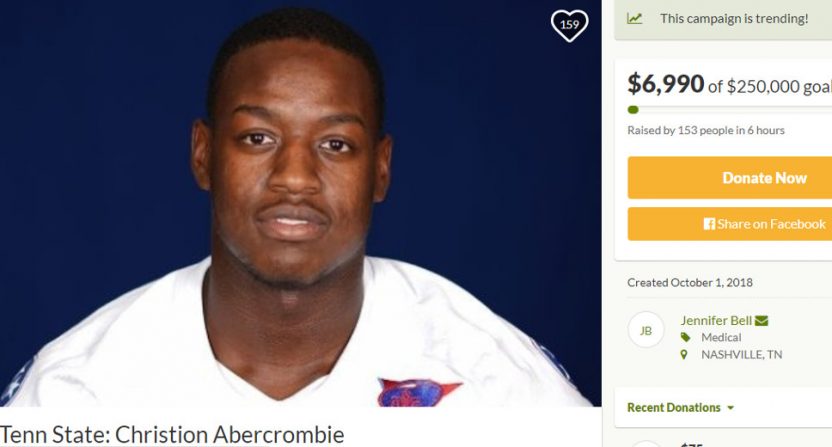 An increasingly popular response to media coverage that raises questions about your organization is to try and blast the reporting of the media outlet in question, whether with cries of “Fake news!” or something a little more subtle. But if you’re going to do that, you should probably have some proof that the key part of what they’ve written is actually inaccurate. And so far, NCAA PR types appear to have gone after SB Nation (for an article about the NCAA telling Tennessee State to stop outside GoFundMe accounts for injured linebacker Christion Abercrombie) without providing that proof.

This started with Tennessee State’s 31-27 loss to Vanderbilt Saturday, where Tigers’ linebacker Abercrombie suffered what the school called a “life-threatening” head injury. Abercrombie underwent emergency surgery, but reportedly is still in critical condition. There was a large outpouring of support for him online, including at least two GoFundMe accounts, but as per Mike Organ of the Nashville-based Tennessean, the school asked for those accounts to be taken down:

Those accounts were taken down at TSU’s request because of a potential violation of NCAA rules. The NCAA also told TSU any other crowd-funding attempts may put Abercrombie’s eligibility in jeopardy.

That seems to align with what Tennessee State tweeted publicly:

Here is the only NCAA approved GoFundMe set up to assist with the support of Christion Abercrombie & his family. Per @NCAA legislation, Tennessee St is the only entity permitted to solicit funds for the student-athlete & his family.https://t.co/VrQGxlvxxx #StandWithChristion

But where this gets really interesting is where SB Nation comes into the mix, and how the NCAA responds to that. SB Nation’s Alex Kirschner wrote a piece titled “Why would the NCAA stop a fundraiser to help a critically injured football player?“, and that piece cited the reporting from Organ and the Tennessee State tweet. It questioned why the NCAA would need to stop outside fundraising efforts, especially as there was no particularly obvious rule violation to be found, but made it still very clear that there was a school- and NCAA-approved GoFundMe (which had raised less than $6,000 of its $250,000 goal as of Monday evening). However, that led to several NCAA PR accounts, including the @InsideTheNCAA Twitter account and the accounts of key spokespeople Stacey Osburn and Chris Radford, blasting SB Nation’s “inaccuracies” with no further detail and without addressing their actual claims:

Actually, the NCAA is working with Tennessee State and supports its efforts as the community rallies around Christion Abercrombie and his family.

Contrary to inaccurate statements from @SBNation and others, the NCAA is working with Tennessee State and supports its efforts as the community rallies around Christion Abercrombie and his family.

Contrary to inaccurate statements, the NCAA is working with Tennessee State and supports its efforts as the community rallies around Christion Abercrombie and his family.

The NCAA didn't block TSU from suppporting the Abercrombie family via GFM or otherwise. https://t.co/AubQRBjreb

But that is not “contrary” to what SB Nation’s article said at all. As previously mentioned, the article was not claiming that the NCAA was not “working with Tennessee State.” Rather, it was criticizing their apparent approach of shutting down other, more timely fundraisers to focus on an after-the-fact one run by the school, and citing unspecified rules violations to justify that. That’s supported by Organ’s reporting and by the tweet from Tennessee State, and the NCAA has said nothing to illustrate why those are “inaccurate statements.”

And this isn’t just about what the NCAA said on Twitter. The organization provided the same statement of “Contrary to inaccurate statements, the NCAA is working with Tennessee State and supports its efforts as the community rallies around Christion Abercrombie and his family” to SB Nation when asked ” a) if the organization had warned TSU of rules violations, and b) which rules those might be.” SB Nation college football editor Jason Kirk tweeted that the organization also refused to say what specifically was wrong with their post.

The NCAA has a problem with this post. We're happy to update as soon as we're made aware of what that problem is https://t.co/grmEPXqRwq

It’s also interesting that the NCAA Twitter accounts singled out SB Nation here, as the actual reporting came from The Tennessean. SB Nation reporter Steven Godfrey tweeted a thread criticizing the NCAA’s response; the most important tweets are here.

The NCAA took issue with us, not the Tennessean, who reported the story, because of our headline: “Why would the NCAA stop a fundraiser to help a critically injured football player?”

The issue at hand is not with SB Nation. The NCAA is claiming ‘inaccurate statements.’ Clearly they’re calling the accuracy of the Tennessean into question, yet trying to litigate semantics with us for the sake of PR.

Right, and that’s what’s so wrong with this approach from the NCAA. It would be one thing if they specifically called out a factual inaccuracy from SB Nation, but they haven’t done that. They’re also not engaging with the central premise of the SB Nation piece, which is not that the NCAA is banning all fundraising for Abercrombie, but that their plan to have the school fundraise in-house and nix all other fundraisers may not be the most effective way to deal with this.

There could be at least a bit of a debate there, and the NCAA could make the claim that it wants these fundraisers run by universities to avoid the potential for misused funds and/or interference from agents. That’s not really a good claim, especially in this particular situation (as Kirschner details), but it’s at least an honest discussion, and the NCAA would look better if they just said “Yes, we told them to shut down the outside efforts; we believe this is better handled by schools, and we’re doing everything possible to help Tennessee State with their fundraiser.” Then we could have a debate over if it’s better to let multiple fundraisers, including more timely ones from trusted people, exist, or to shut them down in favor of a school-organized one. Instead, the NCAA is blanketly calling SB Nation’s piece “inaccurate statements,” without addressing any particular statements. That’s a ridiculous PR strategy, and one that makes them look even worse.