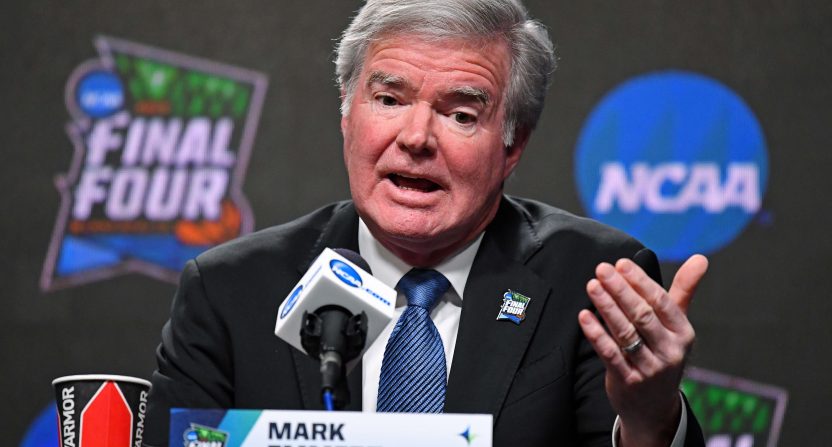 The NCAA opposition towards a California state legislature bill on athlete image rights has ratcheted up to threats to possibly prohibit California schools from NCAA championships if the bill becomes law as written. But actually carrying out those threats would seem to create a lot of problems for the NCAA as a whole, not just the affected California schools. And that’s perhaps particularly true when it comes to diminished media rights and diminished championship revenues.

The bill in question passed the state senate last month and is now set for hearings by two state assembly committees. It would allow student-athletes at California schools to earn compensation for the use of their own name, image, and likeness beginning in 2023. And that bill led to a letter from NCAA president Mark Emmert (seen above at the Final Four earlier this year) to those committee chairs asking for the bill to be postponed while the organization discusses changes themselves, claiming that this bill would “make it impossible to host fair national championships,” and threatening to bar California schools from play in those championships as a result.

“We recognize all of the efforts that have been undertaken to develop this bill in the context of complex issues related to the current collegiate model that have been the subject of litigation and much national debate,” Emmert wrote in his letter to the committee chairs. “Nonetheless, when contrasted with current NCAA rules, as drafted the bill threatens to alter materially the principles of intercollegiate athletics and create local differences that would make it impossible to host fair national championships. As a result, it likely would have a negative impact on the exact student-athletes it intends to assist.”

But what would it look like if this bill did become law and if the NCAA made good on its threat to keep California schools out of national championship competition as a result? Well, at the moment, California has Division I national champions in softball and women’s beach volleyball (UCLA), men’s volleyball (Long Beach State), men’s water polo (USC), and women’s water polo, men’s gymnastics, men’s golf, and women’s volleyball (all Stanford). Yes, those aren’t revenue sports, but California teams have made plenty of impacts in those sports as well as well.

Removing the California teams from the championship field in a lot of the non-revenue sports would be particularly devastating for the quality of those competitions. It would also would likely damage the interest and ratings (especially considering California’s population) in those events, making them even a harder sell for broadcasters. And removing California teams from the championship field in revenue sports might be even worse for the NCAA.

California’s estimated population of 39.56 million is around 12 percent of the U.S. population (327.2 million), and that’s a significant amount of championship attendees and viewers to just write off. The state also has the #2, #8, #20, #29, and #54 media markets. Of course, not everyone in California follows college sports, and there are also plenty of people who live in California, follow out-of-state NCAA teams, and would keep watching NCAA championships even if California teams were banned. But a flat-out “No California” edict would probably have quite a negative effect on viewership for NCAA championships.

And this could get worse still for the NCAA if other states follow suit. For example, North Carolina is considering a similar bill at the moment, and the NCAA basketball tournament would look a whole lot different without Duke and UNC. Considering that revenue from those championships is a big part of keeping the overarching NCAA organization running, that’s a problem.

While the championships are the biggest part of the picture where the NCAA proper is involved, this would also likely have impacts on the regular season rights for the schools and the conferences involved. That’s perhaps especially true for the Pac-12, where four of the conference’s 12 members (Stanford, Cal, UCLA, and USC) would be impacted; if those schools are all eliminated from NCAA championship contention across sports, that suddenly makes Pac-12 rights even less desirable (which is saying something), and probably puts that conference even further behind the rest of the Power Five. It’s also bad news for the Mountain West, which has three of 11 members in California (Fresno State, San Diego State, and San Jose State.)

Of course, reducing the appeal of a property doesn’t necessarily mean less revenue from that property, as broadcasting rights are sold a long ways in advance. For example, the NCAA men’s basketball tournament rights deal with CBS and Turner runs through 2032. And whether a significant change (which banning California schools certainly would be) would spur changes to that deal isn’t clear, as it would depend on the language of the contract.

Consider that UConn’s apparent looming exit from the AAC reportedly isn’t enough to negate ESPN’s 12-year, $1 billion deal with the conference (as per CBS’ Dennis Dodd, an 11-team AAC only “would possibly require what was termed a “fair negotiation” of the contract“). Thus, ESPN’s College Football Playoff deal doesn’t necessarily involve less money if the Pac-12’s California schools are banned, and those schools have never been in the playoff at this point anyway (the Pac-12 as a whole has just two selections to date, Oregon’s title loss in 2015 and Washington’s Peach Bowl loss in 2016). Similarly, the CBS/Turner March Madness deal doesn’t necessarily drop off in payments to the NCAA with a California ban (even if there would appear to be more of an on-field impact there than in football). But the ratings do probably drop under this ban, and that makes broadcast partners unhappy and could possibly trigger some contract renegotiation.

This also would take away a lot of California-hosted events. This past year alone, California hosted the College Football Playoff national championship game (at Levi’s Stadium in Santa Clara), the West Regional of the NCAA men’s basketball tournament (in Anaheim), first and second-round games from other regional brackets (in San Jose), first and second-round games in the women’s basketball tournament (in Palo Alto), a baseball super regional (in Los Angeles), a softball super regional (in Los Angeles), the men’s soccer championship (in Santa Barbara), the men’s and women’s NCAA water polo championships (in Stockton and Palo Alto respectively), and more.

There was also the Rose Bowl in Pasadena, which wasn’t a national championship semifinal host this year, but is part of that rotation. And if a ban actually went beyond national championship competition to all postseason play, that would strike off the Rose Bowl even in non-CFP years, as well as the Holiday Bowl in San Diego and the variously-named bowl in Santa Clara (currently the Redbox Bowl, it’s previously been the Foster Farms Bowl, the Fight Hunger Bowl, the Emerald Bowl, and the San Francisco Bowl).

Yes, there are potentially other cities that could host those events (well, not the Rose Bowl, unless it’s 1942 all over again), but that’s a lot of top host cities off the board. And those cities host a lot of events because of population and/or facilities (in the case of pre-determined tournament sites like football and basketball) or because of strong teams (in the case of baseball and softball, where the location of tournament games is about home teams). The NCAA’s postseason sites would look a lot different with California out of the picture.

It’s understandable why the NCAA is trying to push back hard on this. They’ve long been trying to avoid compensation for student-athletes’ likenesses (see the saga of the Ed O’Bannon case), and if they do eventually have to give in there, they’d undoubtedly prefer to make their own rules rather than have state legislatures tell them what they can and can’t do. And much of their playbook at the moment appears to be centered on delay; they have their own recently-created working group to “examine issues highlighted in recently proposed federal and state legislation related to student-athlete name, image and likeness,” which is supposed to deliver a report to the NCAA board of governors in August and make a final report in October (after the California state legislative session ends in September), and Emmert’s letter is trying to convince the government reps involved to hold off until the NCAA adopts their own plan.

But the NCAA’s done a lot of working groups in the past without a lot of results, and the California legislators involved declined Emmert’s request to hold off, instead adding wording that “it is the intent of the Legislature to monitor the NCAA working group and ‘revisit this issue to implement significant findings and recommendations of the NCAA working group in furtherance of the statutory changes proposed by this act” without removing any of the proposed changes. Annie Pham, a spokesperson for assembly member Kansen Chu (D-San Jose, chair of one of the upcoming hearings) told Berkowitz “We wanted to say that we know that a process is going on now, but we do want to see something substantial come out of that stakeholder group.” So the bid to delay alone may not work out for the NCAA here.

And we’ll see if this actually leads to California lawmakers going forward with this bill. The NCAA’s threat to ban California schools from postseason competition is a significant one, but it’s a threat that if carried out would also have potentially-dire consequences for the NCAA. So at this point, it feels more like a bluff they’re advancing to try and prevent this law than something they’ll definitely do if the law does come into play. But the big question is if the lawmakers will call them on it.