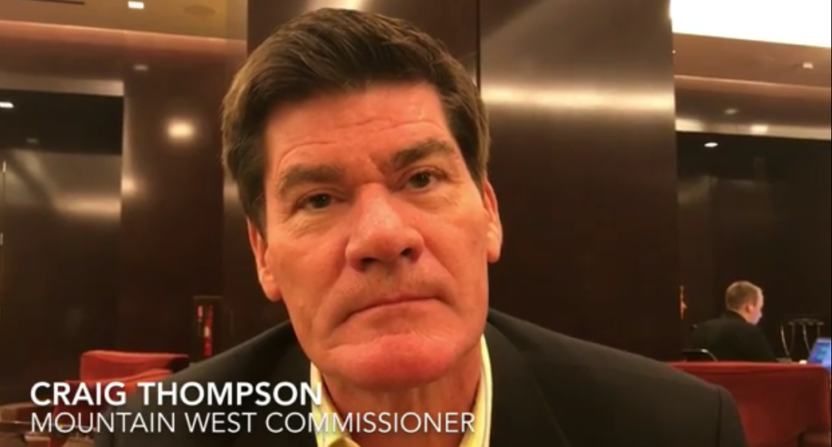 There have been plenty of Power Five college conference executives discussing the possibility of selling their prime live sports rights to tech companies instead of networks in the next round of contract negotiations, but a Group of Five conference may wind up testing the digital streaming market first. The Mountain West Conference has its contracts expiring after the 2019-20 school year, and commissioner Craig Thompson and school administrators make it pretty clear in a (Fort Collins, Co.) Coloradoan piece from Kelly Lyell that they’re looking at streaming-only options as well as conventional networks. However, unlike many who have promoted digital bids as a way to cash in, they have perhaps a more realistic motivation; improving their kickoff times over what they get in their current deal to appeal to players, coaches, and in-stadium fans.

Fans across the Mountain West are grumbling more and more about the league’s late-night games.
Attendance at those games is declining, and administrators are beginning to question whether the $1.1 million a year most are receiving from the league’s broadcast partners — CBS-Sports Network and ESPN — are worth the additional exposure.

…”If you’re finishing your game the next day, that becomes difficult,” Boise State coach Bryan Harsin said. “So game times are part of it when you’re talking about just actually getting people in the seats.”

This is something that could actually be altered by going to a streaming-exclusive contract. The biggest reason for those late-night games is the limited slots on linear TV. For ESPN in particular, the Mountain West isn’t a high priority, so their games are often given late starts on less-prominent channels. With a streaming-only deal, programming could be delivered at a time most likely to maximize audience without worrying about channel space, and that could allow the conference to start its games at times that work better for fans who want to attend in person. And that could boost in-stadium revenue, which is important.

The in-stadium revenue might need to go up significantly to make this work, though, as streaming ventures probably aren’t going to pay as much as even the Mountain West’s small TV deal. The conference is set to distribute about $1.1 million per school per year from media rights revenue under its current deal, a long way from the $43 million the Big Ten is expected to distribute to each of its schools this year (which will likely rise even further in the future). Tech companies are certainly somewhat interested in live sports, but they haven’t paid big for anything other than the NFL so far, and they’ve generally been unwilling to pay production costs, instead just paying a smaller amount to simulcast TV networks’ feeds. That feeds into why Thompson has said the Mountain West is still considering their options carefully, as digital-only might give them better scheduling and could provide similar exposure, but might lead to a decrease in rights revenue. Their digital deals so far haven’t created any revenue:

“The real key there is going to be monetization,” Thompson said Wednesday at the MW’s football media days. “We need the revenue.”

Campus Insiders, which has since been purchased by Stadium, streamed seven MW football games and nine men’s basketball games on Twitter last season and will do so again this year, a Stadium executive said. The conference also live-streams dozens of games each year on its own Mountain West Digital Network.

But there’s no revenue associated with those streams, only an increase in the national exposure MW schools are seeking.

Thompson also notes that while streaming deals can help them reach younger, tech-savvy viewers, and appeal to current and future students, there’s some pushback against them from older boosters who want to be able to watch games on linear TV. And that’s also an important audience for college sports; their eyeballs aren’t as valuable to advertisers, but their pocketbooks are certainly vital for athletic departments. Here’s video of Thompson discussing this with Lyell:

So there’s a lot to consider here, and some gains from going digital-only (potentially better kickoff times, improved in-stadium revenues, increased appeal to younger, cord-cutting viewers) might be offset by the drawbacks (less direct media revenue, less appeal to older viewers). For now, we just know that the Mountain West is still contemplating; they’ve been offered a renewal along the same terms from CBSSN and ESPN, but are opting to wait to make a decision, which Thompson said will likely come in the first or second quarter of 2019. There does seem to be a chance that the conference will go to an all-streaming media deal, and it might make more sense for them than it would for bigger conferences, but there are still potential perils too. We’ll see which way they’ll go.