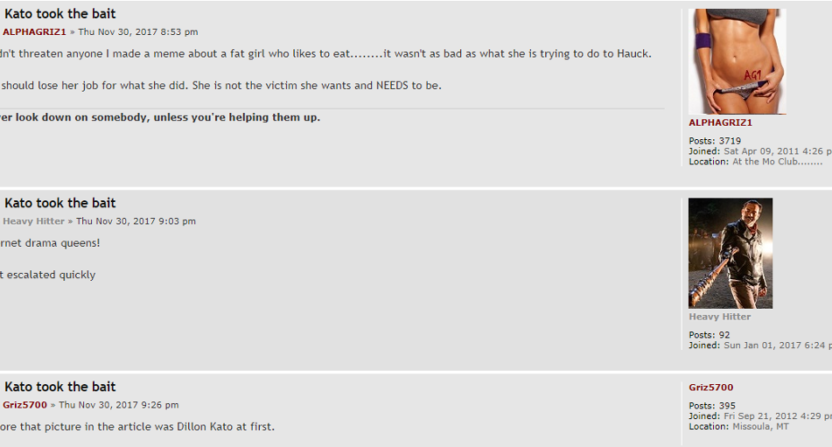 Reports that the University of Montana was looking to bring Bobby Hauck back as the Grizzlies’ football coach (a move that became official Friday) led to a petition from Montana fan Lisa Davey titled “Tell the University of Montana not to hire Hauck. Women are more important than winning,” which included “Last time Hauck was head coach, Missoula ended up making national news over not only the despicable behavior of the players, but over the terrible way Hauck handled the situation with the press. Hauck’s tenure brought disgrace to the Grizzlies, the University, and our community finally culminating in our town being the name of college rape on a national bestseller.”

That petition in turn sparked massive online vitriol against Davey, including one message-board owner posting her address online and making sexual remarks about her.

Hauck coached at Montana from 2003-09, leading the team to an 80-17 overall record and three 1-AA/FCS national title game appearances. Several players were arrested during his tenure, though, including for violent assaults and kidnapping, and one was charged with murder (and later acquitted after spending 25 months in jail). Hauck also froze out the student newspaper (as a result of their questioning around one story of assault), and drew general criticism for overlooking problematic player behavior.

After he left, the program became embroiled in a sexual assault scandal  that made national news and spawned the aforementioned bestseller by Jon Krakauer, Missoula: Rape And The Justice System In A College Town. Some have argued that Hauck successor Robin Pflugard, who was the head coach during that scandal, “may have unfairly borne the brunt of the Hauck era’s recruiting and team-culture missteps.”

Davey’s petition follows along those lines, listing incidents that happened during and after Hauck’s tenure. It also includes a photoshopped image of Krakauer’s book titled “Bobby Hauck’s Missoula.” She told Missoulian reporter Dillon Kato “As he was leaving was when we headed into the rape scandals. I firmly believe that was from a culture that he put in place while the coach.” But the petition spawned a lot of blowback for her, including from Mike Schlosser, owner of Grizzlies’ message board maroonblood.com. Schlosser posted Davey’s address, made sexual comments about her, and said she’d “go down hard.”

Kato has more details on what happened here:

The posts, on the Griz fan forum maroonblood.com, included a comment from AlphaGriz1 next to a photo of Lisa Davey that said, “Now seriously tell me this face hasn’t (performed a sex act) for food a few times in her life?”

The post went on to disparage Davey’s “receding hairline” and “gigantic teeth,” adding: “Not to mention the ‘man’ in her life check that dude out what a loser.”

When he first references Davey and her petition, AlphaGriz1 — who MaroonBlood owner Mike Schlosser of Butte says is him — wrote, “This bitch would be the first to go down hard.”
On Thursday, Schlosser said he didn’t know what he meant by that, then said he maybe meant that she should suffer on a professional level.

“Is it a little over the top? Maybe. Whatever, that’s what we do on message boards,” he said.

…On MaroonBlood, along with links to Davey’s social media profiles, Schlosser included the message: “Well if its cool to trash a guy that did none of the crimes shes so worried about then I guess its fair game to go after her personal life as well. These people need to be taught a lesson and HARD.”

Schlosser posted Davey’s address on the forum, adding, “She blocked me on Twitter after posting her address. Hey if she likes making Hauck uncomfortable then fair is fair.”

Those posts were eventually removed after The Missoulian contacted Schlosser, but Kato writes that Schlosser kept the information up on Twitter:

After the Missoulian reached out to Schlosser, AlphaGriz1’s post containing Davey’s address was removed from MaroonBlood. AlphaGriz1 still had a message posted on Twitter including Davey’s address on Thursday, along with the message “Wonder what coward lives here? You can block me but you can’t block all your personal information on social media, websites, Twitter and Facebook. Fair is fair! #DoxxParty2017″ along with an unprintable hashtag.

Schlosser said he didn’t want anything he said to appear in print; however, he continued to answer questions after being told he was being interviewed for a news story.

Schlosser’s AlphaGriz1 Twitter is currently locked, so it’s not clear if that’s still there. However, his discussion of Kato’s story in a MaroonBlood thread titled “Kato took the bait” make it seem like he’s not backing down. Some highlights of his comments:

I can’t tell you how funny this is to me, that she insults me in that article and is trying to be the victim!

You literally, cant make this shit up

…I didn’t threaten anyone I made a meme about a fat girl who likes to eat……..it wasn’t as bad as what she is trying to do to Hauck.

She should lose her job for what she did. She is not the victim she wants and NEEDS to be.

Kato’s story mentions that Davey has reported the exchange to the Missoula County Sheriff’s Office, but at this point, they have said prosecution doesn’t look likely. It also states that Scholsser has twice pled guilty to disorderly conduct in the past decade:

Missoula County Undersheriff Rich Maricelli said Thursday that a detective took a report from Davey, and is continuing to investigate the case, but at this point he doesn’t think the actions rise to the level of something that could be referred to the county attorney’s office for prosecution.

Public records show that Schlosser has twice pleaded guilty to disorderly conduct charges over the past 10 years.

This bears some similarities to the attempted Greg Schiano hire at Tennessee, with fans complaining about the move and then others complaining about the backlash. However, Schlosser seems to have gone much farther than most backlash critics, posting personal information of the fan who led the backlash and making graphic public comments about her. And it may lead to some consequences for him; as per the story, Montana athletic director Kent Haslam had his office tell Schlosser to take down the initial post, and threatened to revoke his season tickets and tailgating privileges if he continued his behavior. We’ll see if that happens. But this is a remarkable, and problematic, story of how far one message board owner went in disagreeing with a petition.