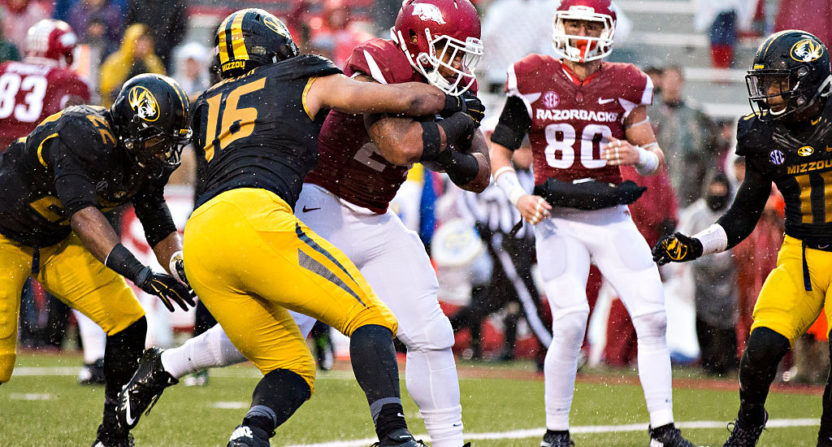 We’ve seen plenty of college football programs try to crack down on media access, from McNeese State football coach Lance Guidry initially attempting to stop the press from talking to his players to a whole range of coaches selectively restricting certain outlets, but it’s unusual to see a player rather than a coach initiate a crackdown. That appears to be what Missouri defensive end Marcell Frazier (#16 above) is doing, though, as per his tweet Tuesday:

I will not be available to any local media this season. I gain nothing from it. I am still an amateur, not binded to do interviews (yet).

Frazier, a senior who broke his arm in spring practice but is still expected to play this fall, is quite right that there isn’t anything that can make him talk to the media. But it’s interesting to ponder why he’s taking this step. Pete Grathoff of The Kansas City Star wrote that it may be about tweets Frazier sent Monday in the wake of coverage of Mizzou basketball player Jeremiah Tilmon being arrested for underage drinking. Here are those tweets:

The writers get such a kick when MU athletes are arrested. Almost as though it's a chance for them to reinforce their beliefs.

Teenager with a beer is covered like watergate. Frats spiking drinks, committing assault, and encouraging underage drinking is a non story.

Frazier’s not wrong that there may be too much coverage of relatively-minor offenses, although the defense from the media side is that an arrest of a prominent athlete is notable, especially if it carries the possibility of a suspension from the team. (And it’s not the media who write or enforce laws on alcohol.) But perhaps his more-interesting claim is about local interviews in general, where he says “I gain nothing from it.” He may not be wrong there either, and that speaks to a larger discussion of the incentives involved in today’s media world.

Why do leagues, teams and players want the media to report on them? At first, the idea was largely to promote their games, and that still somewhat matters in today’s world (although league- and team-owned sites are investing more and more in doing that themselves, there’s still value to independent coverage). And for players, the idea can be to promote themselves; if an athlete receives favorable coverage, or even just gets their name out there frequently, that can help them with endorsements, future contracts, et cetera.

The idea of promoting yourself through the media has also declined in importance in today’s world, though. Players can now express their own point of view through unfiltered outlets like social media, The Players’ Tribune, or Uninterrupted without relying on the independent media, and many of them are. And while there still can be some value to regular media coverage of a player, that value’s exceptionally limited for NCAA athletes. They can’t get endorsements or sign contracts (yet), and while media coverage may still play a bit of a role in where they’re chosen in an eventual pro draft, it’s much less important than it used to be given today’s increased scouting staffs and availability of film.

Getting talked about regularly may help a bit in the long run, maybe with post-career local business ventures or so on. However, Frazier is right that there aren’t a ton of obvious immediate benefits to it. That hasn’t stopped one former Mizzou player turned local radio personality from criticizing him, though:

You’re only hurting yourself, bud. Rethink this one. https://t.co/cUHum9hsZa

It’s also interesting that Frazier’s only applying this ban to local media. If any media coverage is going to really impact his draft prospects or overall profile, it would be national, not local. But there’s an argument to be made that even national coverage won’t do much for him. However, perhaps this is more about him not having specific complaints against the national media.

Frazier’s media ban is an unusual one for the moment, but it’s not hard to see other student-athletes following suit. They’re already putting a ton of effort and time into their sport, and if they don’t feel they receive benefits from spending extra time talking to reporters, what’s the point? In today’s age where they can communicate through their own social media channels or venues like The Players’ Tribune, it’s much less important for them to get their stories in local media.

While bans like this are unfortunate for the local reporters, and make it tougher for them to do their jobs,  it’s much harder to criticize players for cracking down on media then it is coaches or athletic departments. The latter two gain obvious financial benefits from independent coverage (and the deal there is that not all coverage is going to be positive); the players’ gains from it aren’t anywhere near as clear, especially while they’re still amateurs. If Frazier and others don’t want to talk to specific media outlets, it’s difficult to blame them.

Pac-12 cuts include laying off around 12 full-time Pac-12 Networks staffers, implementing a hiring freeze at both the networks and the conference, and reducing the salaries of commissioner Larry Scott and senior staffers by 20 and 10 percent respectively.

"The schemes had powerful anti-competitive effects, distorting the market for the commercial rights associated with soccer and undermining the ability of other sports marketing companies to compete for such rights on terms more favorable to the rights-holders."

Who's gonna pay $60 for a one-fight card in the midst of a worldwide pandemic?

This isn't "One Shining Moment," but it'll do.

Pac-12 cuts include laying off around 12 full-time Pac-12 Networks staffers, implementing a hiring freeze at both the networks and the conference, and reducing the salaries of commissioner Larry Scott and senior staffers by 20 and 10 percent respectively.

"The schemes had powerful anti-competitive effects, distorting the market for the commercial rights associated with soccer and undermining the ability of other sports marketing companies to compete for such rights on terms more favorable to the rights-holders."

Who's gonna pay $60 for a one-fight card in the midst of a worldwide pandemic?

This isn't "One Shining Moment," but it'll do.