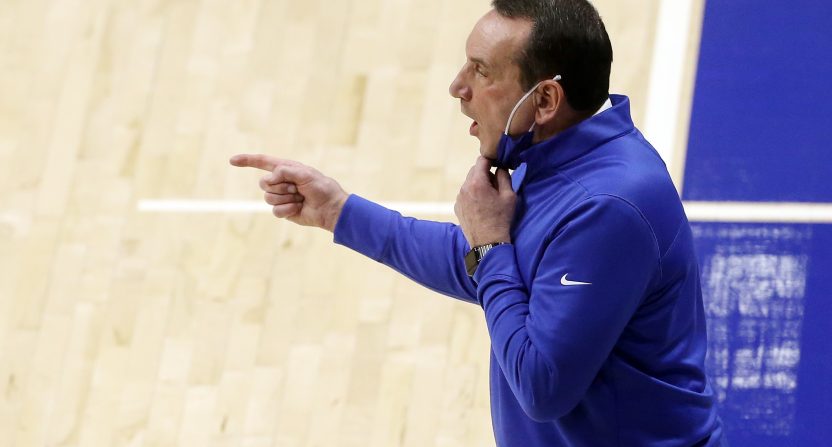 This is an understatement but Duke isn’t playing well right now. After a loss to unranked Louisville, the Blue Devils sit at 5-5 and 3-3 in the ACC. This slump may be getting to head coach Mike Krzyzewski as he took offense at a seemingly innocuous question from a student reporter after today’s loss.

After the Louisville game, Duke Chronicle reporter Jake Piazza asked Coach K “what the next step forward is” as Duke lost their third game in a row and have games against Georgia Tech and Clemson next week. How Krzyzewski reacted to the question, you may have thought Piazza asked him if he was worried he was losing his job.

This was not exactly how I expected my first postgame question to Coach K to go. https://t.co/a7sU1UE46a

Coach K tried to equate the question Piazza asked to him taking the toughest Econ test and how he would feel if someone asked him what the next step was after taking that test.

Four things wrong with this line of logic from Coach K:

One, I would be somewhat worried if Coach K is trying to equate the toughest Econ test with a game against unranked Louisville because I’m sure Louisville won’t be Duke’s toughest test this season.

Two, if you know you did badly on a tough test you probably already have a pretty good idea what the next step is. That next step might be adjusting your study habits, studying more, or seeking out a tutor. That next step could also be getting drunk that night to try and forget about that test so you can move on to fight another day.

Three, Coach K has no room to talk about someone having “empathy” toward him and his team when he’s not being empathetic toward someone who is doing their job. Piazza’s role is to ask questions that best inform fans what’s going on and Duke has lost three straight. Fans want to know what’s going on with Duke losing so the questions aren’t going to be about how great the team is right now.

And four, no one is going to care enough about academics to ask a college student in a press conference why they did badly on a test. Maybe we should because if we actually did care about academics, maybe college coaches like Krzyzewski wouldn’t be the highest paid employees at many of these schools.

This isn’t about Krzyzewski going after a student reporter simply because he’s a student reporter. Some will look at it that way and feel that’s unfair but people reacting negatively to your questions after they suffered a tough loss is the nature of the beast sometimes. If you’re planning to make a career in journalism, having tough skin is a good thing to have. And it’s best to develop that when you’re in college.

The real issue is that Piazza asked a fair question that many other reporters would ask and Coach K has enough experience answering media questions that he could’ve handled this differently. Maybe Krzyzewski didn’t have time to think about the next step but he could’ve given an answer like, “It’s too early to determine what that next step is so soon after the game. We’ll go back and see what we could’ve done differently and adjust before our game against Georgia Tech Tuesday.” Coach K kind of did that at the end but the damage was done by then.

At least Piazza didn’t give Krzyzewski a, “Talk about the loss…” question that isn’t actually a question. Piazza could’ve really gone for the jugular and just ask Coach K why Duke sucks right now. If he had asked either of those questions, I could understand Coach K reacting like he did. Fact is, it was a tough but fair question and if Mike Krzyzewski is going to react like that to fair questions, how’s he going to react if Duke continues their losing ways?

UPDATE: On Monday, Piazza wrote in the Duke Chronicle about what happened over the weekend. Piazza revealed that Coach K called and apologized to him saying, “Our call was short, but the sincerity in his apology was genuine. And in the end, I appreciated the call.”