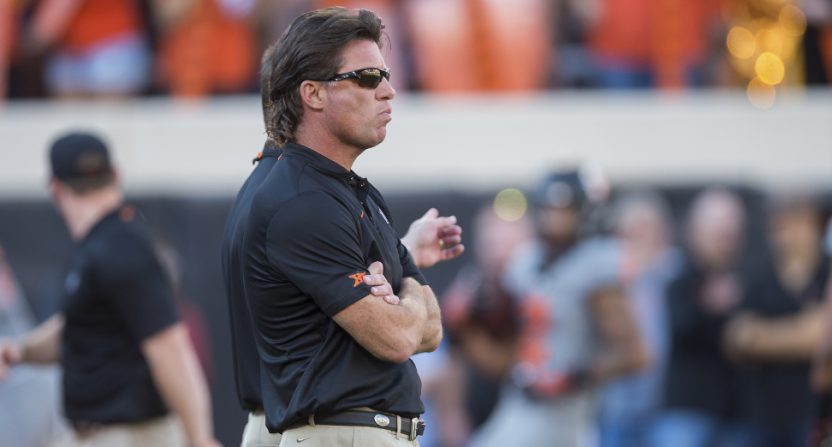 There’s a long tradition of pranksters gaining access to media conference calls, but a Big 12 conference call with Oklahoma State head coach Mike Gundy Monday saw that play out in a particularly interesting way. After all, last week saw Gundy involved in an access controversy after he reportedly threatened (through his media relations director) to pull all player availabilities for the rest of the season if any reporters asked players about starting receiver Jalen McCleskey deciding to transfer.  That story made national news, and three separate people brought it up in questions to Gundy on the Big 12 coaches’ conference call Monday. Here’s audio, via Riley Gates (a reporter for 247 Sports’ GoPowercat.com Kansas State site):

You asked for it. Here's the audio of Mike Gundy's time on the Big 12 teleconference getting hacked today. #Big12 #OkState pic.twitter.com/S686OBVsQG

Here’s the transcript from Gates:

Had some "fraudulent calls" during Mike Gundy's time today. His response: "That is ok we have a lot of fraudulent people in this world." pic.twitter.com/smqyZmETWT

The first question is announced as coming from what sounds like “Brett Kurtenbach” of “TheBig12.com.” But “TheBig12.com” is not actually a current domain (although it’s available for $2,000 through GoDaddy!). The next question is from “Rich Mitchum” of “CFB Daily”: there was an old ESPNU show called CFB Daily, but it’s not around anymore. The third question is from something like “Tran Staja” of the Stillwater Tribune; that is not a paper (the local paper in Stillwater is the NewsPress). So, yeah, obviously not actual names and outlets, and seemingly either fans who somehow got ahold of the conference call info and decided to prank Gundy, or very, very bold media members pranking Gundy under aliases.

Conference call pranks are often annoying, considering that there are plenty of reporters there just trying to do their job and get in legitimate questions. However, this one’s maybe easier to support than many, given that it comes after that ridiculous behavior towards the media from Gundy. And while this is obviously being played for laughs (and producing them; “What other aspects of people doing their jobs do you have a problem with?” and “unwarranted petulance” are particularly great lines here), the first and third pranksters are actually grilling Gundy about his treatment of the media in a way not many actual reporters have. Gundy deserves to be blasted for that move, and he deserves to be reminded of how wrong his decision there was. It’s hard to feel too much sympathy for him here. (And his “fraudulent people” response doesn’t suggest he’s really learned anything from this.)