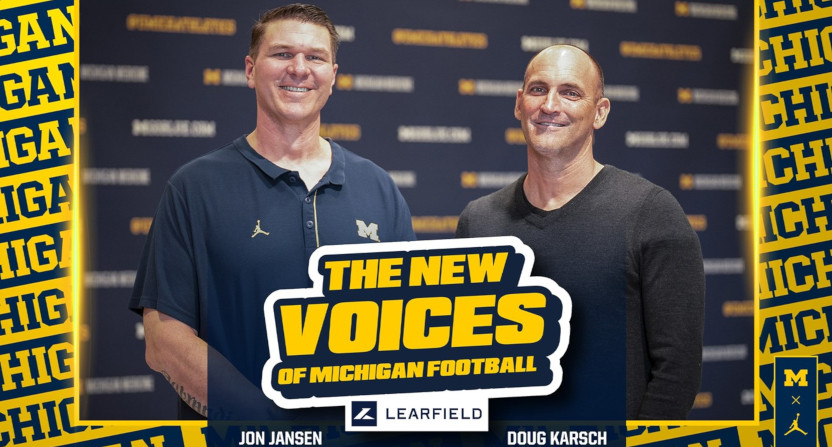 The Michigan Wolverines had two pairs of big shoes to fill on their football radio broadcasts this offseason, with prominent voices Jim Brandstetter (play-by-play) and Dan Dierdorf (analyst) both retiring after the 2021-22 season. Michigan and Learfield have now announced replacements, Doug Karsch on play-by-play and Jon Jansen as the analyst. Both have long connections to the program; Karsch had been on their radio broadcasts for 16 years, most recently as sideline announcer, while Jansen played offensive tackle for Michigan from 1995-98 before going on to a decade-long NFL career, and had previously been on the team’s pre-game show with Karsch for the past eight years. Here’s more from Michigan’s release on these moves:

“Doug and Jon are a great team and will bring their passion for Michigan Football into the modern era of radio broadcasts,” said Kelsey Harmon Finn, Vice President and General Manager, Michigan Sports Properties. “While Dan and Jim leave big shoes to fill, we are confident that Doug and Jon will deliver to fans an informed and entertaining broadcast about today’s team while still honoring the program’s traditions and history. We are excited about the season ahead.”

“A great partnership has been formed between Doug and Jon and we look forward to that continuing as our football radio broadcast team moving forward,” said Warde Manuel, the Donald R. Shepherd Director of Athletics. “We have the No. 1 rated pre-game radio show for a reason; it’s the chemistry, passion and knowledge that Doug and Jon bring to their work. They take tremendous pride in entertaining and informing our fans about our team, coaches and all that involves Michigan Football. Their historical knowledge and relationship with past and present Wolverines makes this a seamless transition in the radio booth.”

…A lifetime Ann Arbor resident, Karsch has been a member of the Michigan Football radio broadcasts for the past 16 seasons, covering the sidelines and co-hosting the pre-game tailgate show alongside Jansen. Karsch also worked as a co-host of the weekly football coaches’ radio show in the past and for many years hosted the athletic department’s TV Show, Wolverine Magazine. Karsch began working in Ann Arbor and covering Michigan Football in 1994 as the sports director at WTKA Radio (1050 AM). He was one of the first employees hired at WXYT Radio in Detroit (97.1 FM) in 2001, and hosts a mid-day show called “Karsch & Anderson” (formerly the Big Show) that has been with the station since its inception. Karsch has covered and reported on the Detroit sports market since the early 1990s, and has made TV appearances and written guest columns on a regular basis.

Jansen has been a member of the Michigan Football radio broadcast team for the past eight years. In addition to co-hosting the pre-game tailgate show, he has provided halftime and post-game analysis while conducting the locker room interview with head coach Jim Harbaugh. Jansen has filled in as the color analyst on several radio broadcasts over the years. He also hosts the Inside Michigan Football Radio Show on Mondays during the season as well as two athletic department podcasts, In the Trenches and Conqu’ring Heroes. Jansen has been a regular on the Inside Michigan Football TV Show since 2018. In addition to his work for LEARFIELD and the athletic department, Jansen has been a morning show host on WXYT Radio in Detroit (97.1 FM) since October 2020.

So these voices will be quite familiar to Michigan fans. And that should make the transition from a couple of prominent figures like Brandstetter and Dierdorf a little easier. We’ll see how Karsch and Jansen do in their new roles.