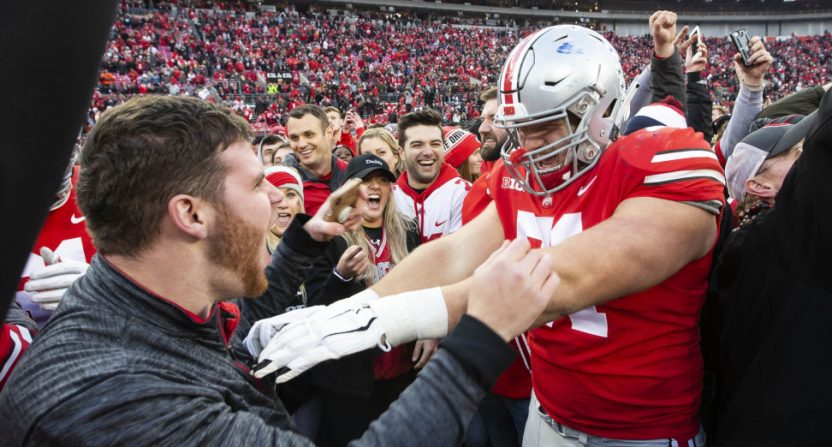 What do you do for a follow-up to “the highest-rated regular-season college football game in Fox history“? Show the same game again next year and draw an even better rating, apparently. Last year’s Ohio State-Michigan game, airing on Fox for the first time thanks to that network paying a higher rights fee than fellow Big Ten broadcaster ESPN and thus getting first pick of games, drew a 6.7 rating and 10,513,000 viewers on average, the best Fox had ever drawn for regular-season college football. But this year’s game didn’t just pass that, it clobbered that, pulling in a 7.5 rating and 13,200,000 TV viewers on average (a rise of 26 percent in viewership, and the audience goes to 13,345,000 if streaming viewers are included). Here’s more from Fox’s release:

Last weekend’s rivalry matchup between Ohio State and Michigan, in which the Buckeyes defeated the Wolverines, 62-39, to earn a spot in Saturday’s Big Ten Championship Game, drew a massive audience of 13,200,000. The game ranks as FOX’s most-watched regular-season game ever and is up +26% over last year’s matchup (vs. 10,513,000). On FOX Sports streaming services, Ohio State-Michigan attracted an average-minute audience of 145,000, the platforms’ best-ever performance for a college football game.

It’s pretty remarkable to see a 26 percent year-over-year jump in anything, but even more so when you’re talking about an event that previously set a viewership record. Of course, it helped that the stakes were higher this year; last year, Ohio State was ranked ninth in the CFP rankings and Michigan was unranked, while this year saw the #4 Wolverines facing the #10 Buckeyes, and its outcome (a 62-39 win for Ohio State, the Buckeyes’ seventh in a row in this series) had significant playoff implications (in particular, dooming Michigan while giving Ohio State a slight chance of reaching that level).

The 26 percent jump is still remarkable, though, and it’s worth noting that it wasn’t the only impressive rating this week. The second most-watched game was the Iron Bowl between #1 Alabama and Auburn, which pulled in a 5.1 rating and 9.1 million viewers for CBS (down from a 7.8 rating for Auburn’s upset win last year, though), while #3 Notre Dame’s clash with USC grabbed a 4.4 and 7.7 million viewers (7.8 with streaming) for ABC, and #5 Oklahoma’s match against #13 West Virginia drew a 3.0 and 5.6 million viewers for ESPN. ESPN noted that the Notre Dame game was ABC’s most-watched November prime-time game since 2014 and the most-watched Notre Dame game on ESPN since 2016, plus a 46 percent rise over the Notre Dame-Stanford game they showed last year, and that Oklahoma-WVU was one of the top three Friday night games they’ve ever shown (dating back to 1993). And that adds to what’s been a strong season of college football ratings for them, something seen over at Fox as well:

With average viewership of 3,324,000 heading into this weekend’s Big Ten and Pac-12 conference championship games, 2018 is the most-watched college football regular season in FOX broadcast network history. This season’s average viewership on the network is up +3% over last year (vs. 3,224,000), according to Nielsen Media Research, while the average-minute audience for college football on FOX Sports streaming services is up +33% (16,000 in 2018 vs. 12,000 in 2017).

So it’s been a pretty good year for a lot of networks broadcasting college football. We’ll see if that continues with this week’s conference championship games, the Army-Navy Game, and then the bowls and playoff matchups.