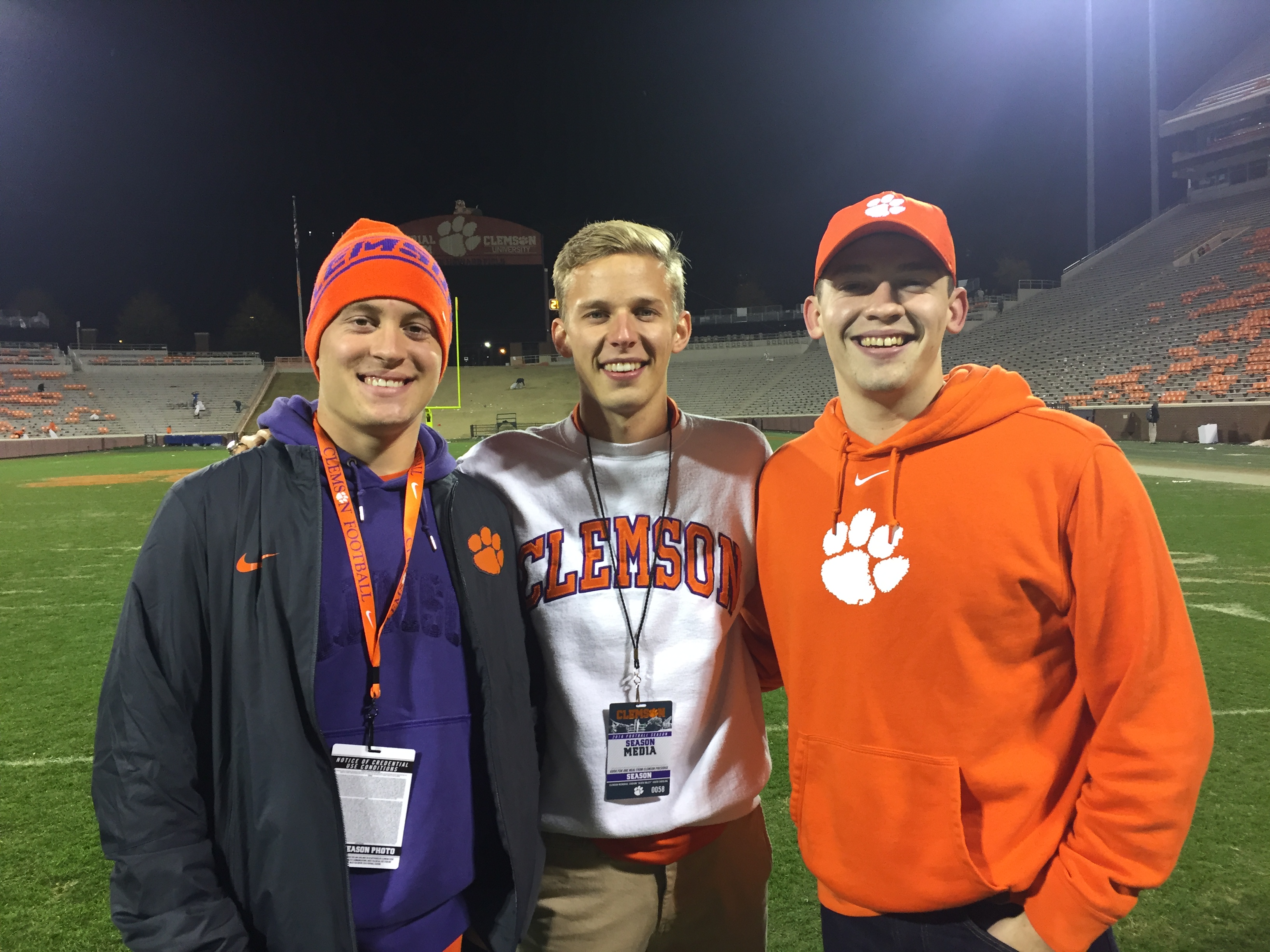 As with many other social media services, Instagram is trying to work with teams and leagues to create compelling sports content. One of their initiatives this year has been a “Correspondents Program” in partnership with schools around the country, which led to a student being selected to take over that school’s official Instagram account for select college football games and post behind-the-scenes looks using Instagram Stories.

The Instagram team then evaluated the different students involved and picked one to take over the main @instagram handle (with its 206 million followers) to post a story from Monday’s Alabama-Clemson national championship game. The winner is Paul Trimmier, a senior at Clemson majoring in parks, recreation and tourism. Trimmier (seen at center above with his roommates, who also do social media work for Clemson Athletics) spoke with Awful Announcing this week, and said this all began thanks to his roommate’s interests.

“It all started with my roommate, Max Huggins,” Trimmier said. “He does videography for Clemson and just seeing his work firsthand was so cool. I liked the way he and the whole creative team portrayed Clemson Athletics through various media channels.”

That led to Trimmier approaching Clemson’s director of new media, Jonathan Gantt, which led to him getting a chance to join the athletic department late in the season as a digital media assistant. Trimmier said he hadn’t previously worked in the field at all, but he wanted to be involved because of his love for sports and for how sports content can affect people.

“I had no previous experience with any sort of digital content for anything other than myself,” he said. “I like the creative, storytelling aspect of it. It’s so cool when you watch a video or read something and it affects you in a certain way. Sometimes it gets you pumped for a big game, sometimes it makes you sentimental, or sometimes it brings you to tears. The possibilities are endless. I felt that I had the creative part and I just wanted to link that with sports. I really love sports. I always have. It also doesn’t hurt that Clemson has been so successful in not just football, but numerous sports. I can’t think of a better time to be at Clemson than now.”

When the Instagram Correspondents Program came up, Trimmier was chosen for that. He said he’s been using the platform on a personal level for five or six years (you can check out his personal account here), so it was a natural fit. For him, Instagram’s biggest appeal is how it lets you follow others’ creative pursuits, whether friends or celebrities.

“I just love staying connected with my friends and the opportunity Instagram gives people to be creative,” he said. “It lets me keep up with people I don’t see all the time. I follow a lot of famous athletes and music artists as well, and Instagram lets people see their lives in a different way. I’m a huge fan of uniqueness and Instagram acts as an effective vessel to show that.”

Trimmier’s opportunity to take over the Clemson Instagram account came November 26 for the Tigers’ game against in-state rival South Carolina. Although the game on the field was lopsided, with Clemson winning 56-7, Trimmier said it made for a great Instagram story.

“It was a perfect game for it too, because it was our big rivalry game. The crowd was louder, it was a night game, and we won…by a lot,” he said. “The stage was perfect. Once Jonathan Gantt (my boss) approached me about it, I was ecstatic. It was also my last home game as a senior, so having the access I had that night was incredible. I got to see parts of a Clemson football game that I had never gotten to experience.”

He said his key focus with Instagram stories is providing a behind-the-scenes look for fans, and doing so with a sense of humor.

“I think people just want to see things they don’t normally get to experience,” he said. “They want to feel like they are part of something exclusive, even if they aren’t actually there. If I could make a fan feel more connected through a video or photo I took, I think that is what it’s all about. I also love humor. I’m always trying to incorporate some sort of humor in posts. If people laugh, they are probably more likely to remember it or share it with others.”

Trimmier’s since been doing further Instagram takeovers for Clemson’s men’s basketball, and he’s excited to have the chance to represent his school with this opportunity during the national championship. He said part of that opportunity comes from the people he works with, who have taught him a lot.

“I’ve learned so much,” he said. “First, I can’t talk enough about the creative team at Clemson. There’s too many to name. My bosses, Jonathan Gantt, Nik Conklin, Jeff Kallin, and Phil Sikes are so eager to help students or anyone asking what their ‘secret’ to success is. A lot of people don’t realize how much social content that Clemson puts out is actually done solely by students. While Jonathan and the team are there for guidance, they leave so much room for each student to be creative and put their own twists on things. I’m so thankful that they have let me be a part of it all. Overall, the biggest things I’ve learned is how important it is to create a brand, stick to it, and tell a story. Clemson has emerged amongst the top in college athletics in doing that and it has shown.”

He said the chance to go to the national championship and do this on the main Instagram account is a remarkable opportunity.

“It is incredible,” he said. “When Jonathan and I first heard about the opportunity from Instagram he looked at me and said, “I think we’re gonna get you to Tampa.” Then when I got the call that I won and was going to get to take over the official account, I was so pumped. It is so crazy that what started as a series of videos I took on my phone led to a trip to the National Championship game and an opportunity to work with Instagram. It is even more impressive that Clemson will be there too. Regardless, it is an awesome experience.”

As for what he has planned Monday night, Trimmier said presenting close-up looks at the celebration is going to be a key focus for him.

“I think capturing the celebration is important. There’s so much surrounding it. You have the players hugging, fans hugging, and everyone is just so happy. You don’t really get to see all of that on TV so seeing it up close will be special. Being there for the trophy presentation and hopefully the locker room celebration is going to be awesome as well. I don’t know about Alabama, but at Clemson, we dance. So if Clemson wins, I will surely try to be in the locker room to capture the celebration.”

“People keep asking me if I’m nervous posting in front of 200 million plus people, but it’s not like I have to see all of them so I think it will be fun!”

You can check out Trimmier’s story from the national championship game on the main @Instagram account Monday night.