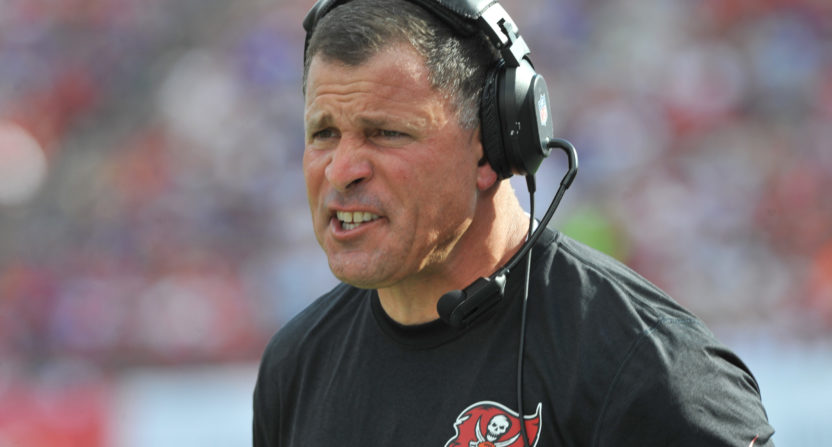 Tennessee’s short-lived decision to hire Ohio State defensive coordinator Greg Schiano and then recant hours later after massive backlash from the internet, senators and more has sparked a whole lot of fallout, and a whole lot of media members criticizing the protests and those who led them, in particular Clay Travis of Fox Sports Radio/Outkick The Coverage.

Here are a few examples:

Tennessee is now having to focus on coaches with "Tennessee ties" because no one else will touch that job with a ten foot pole…You were led by emotional hypocrites with a severe lack of football knowledge that incited an internet mob…you made your bed, now go to sleep!

Clay Travis and his friends have helped to make this arguably the worst job in sports. Any coach who takes this job knows that as soon as he hits a rough patch he and his family will be subjected to the worst kind of Internet driven harassment. https://t.co/5lxvNAPukW

"These idiot, mindless, dopey, pathetic loser protesters don't think about the ramifications for a man who's lived his life the right way.

.@ClayTravis fights daily against the mob mentality of the left based on feelings and not facts… then he leads his lynch mob to off Schiano. Congrats

This @ClayTravis article from 2014 slamming the mob mentality of social media is INCREDIBLE to read considering everything that happened today. https://t.co/cyotCATvWS pic.twitter.com/B3jqi51Sm2

Yahoo’s Pat Forde also dialed up the rhetoric in a column:

As Yahoo Sports reported, the school was poised to hire Ohio State defensive coordinator Greg Schiano — the guy who achieved the impossible by making Rutgers respectable earlier this century. And then came the lynch mob to destroy the deal.

You people are ridiculous. Not all of you, but the delusional loudmouths who somehow think a program with a 62-63 record over the last decade is too good for Schiano. The internet vigilantes who want to bully their way into running the school’s coaching search. The piling-on politicians. The protestors. The rock painters. The rubes who still are waiting for Jon Gruden to slide down the chimney.

But the worst among the Tennessee lunatic fringe are the disingenuous liars who say this Schiano backlash is about Mike McQueary’s testimony regarding Jerry Sandusky and things that happened at Penn State, when in reality it’s because they don’t think Schiano is going to win a Southeastern Conference title. Don’t go getting righteously indignant when this has nothing to do with being righteous and everything to do with trying to beat Georgia.

Carnival barker Clay Travis, who spent Sunday fomenting this revolt, makes it clear in this column what he thinks is the primary problem with Schiano: “In what universe does it make sense to hire Greg [expletive] Schiano right now? We’re talking about a guy with a losing record in college football at Rutgers who got fired by the Tampa Bay Buccaneers and just vanished from coaching until Urban Meyer decided to hire him as defensive coordinator.” In the next paragraph, he gets to the Penn State business. But first? First and foremost? It’s the mortal sin of a losing record at Rutgers.

If you are a Tennessee fan who has sincere ethical qualms about what Schiano may have known at Penn State many years ago, fine. The attorney general who prosecuted the Sandusky case doesn’t, but OK. Ohio State apparently is satisfied with Schiano’s reputation, since it has employed him the last two years.

But if you used this as a Trojan horse to blockade a coaching hire you don’t like because you think Tennessee football deserves better, shame on you. And now that the Schiano hire has been blown up because of this, good luck landing the next guy. Who would want to deal with this fan base right now?

On ESPN’s First Take, Stephen A. Smith said “I think this is a travesty, and I want to be on the record stating that I think Greg Schiano is being royally screwed over in all of this. This is a travesty of justice.”

On Outside The Lines, Bob Ley went after both protesters and Tennessee’s administration:

There are a lot of adjectives to describe what was done to Greg Schiano, but here's the most accurate: UNFAIR pic.twitter.com/kU9TWplWPA

“Volunteer Nation got a jump start by one day on Cyber Monday, they sold Greg Schiano short. There are a lot of adjectives to describe exactly what was done to Schiano. They include surprising, unprecedented, but here is the most accurate, unfair. …Instead, in a scene only missing Madam Defarge knitting by the guillotine (look it up), Volunteer Nation united behind unproven hearsay from a civil lawsuit to label Schiano an enabler of sexual abuse. You can be down on Schiano for his player relations, for his bad time in Tampa, his uneven success in a weakened Big East conference, but none of those carry the toxic weight of that charge about Penn State. In a post-Weinstein, post-Charlie Rose world, there’s a lot of changing that need to happen, a lot of unheeded voices who must be heard, but reviving an unproven allegation and letting the downhill gravity of social media turn that into a blown-up contract leads to only one question: who is more to blame, those who were yelling or those who were supposed to be in charge who listened and then decided to act?”

As Ley notes, there are plenty of possible reasons to criticize Schiano that have nothing to do with Penn State, from his cited biggest success being a 68-67 overall record at Rutgers to the complaints of verbal abuse from players there to his 11-21 NFL stint. And there would have been plenty of non-Penn State reasons for Tennessee fans to be mad at athletic director John Currie for hiring Schiano rather than any of the other candidates on the market.

But the Penn State allegations definitely had the most power in reversing this decision. They revolve around testimony from former Penn State assistant Mike McQueary in a 2015 civil lawsuit, which was unsealed last summer:

McQueary, who testified in Sandusky’s 2012 criminal case that he had told Paterno of seeing Sandusky rape a boy in 2001, said in the 2015 deposition that he had “briefly” discussed with Bradley what he had seen.

“He said another assistant coach had come to him in the early ’90s about a very similar situation to mine, and he said that he had — someone had come to him as far back as early as the ’80s about seeing Jerry Sandusky doing something with a boy,” McQueary said.

According to McQueary, Bradley identified Schiano, now the Ohio State defensive coordinator, as the other assistant. In response to a question about whether Bradley had shared details of what Schiano had said, McQueary related a conversation with Bradley.

“No,” McQueary replied, according to the documents, “only that he had — I can’t remember if it was one night or one morning — but that Greg had come into his office white as a ghost and said he just saw Jerry doing something to a boy in the shower. And that’s it. That’s all he ever told me.”

McQueary added that he didn’t know whether Bradley, now UCLA’s defensive coordinator, had reported the incident, which he said happened in “like 2005, ’06; it could have been anywhere in there.”

Bradley and Schiano both denied seeing any abuse at Penn State, and prosecutors did not lay charges against them. But those allegations live on out there, and they’re definitely something that helped stir up the fires in this situation. How much of the backlash was sincerely about that and how much was people hating the Schiano hire for football reasons (or for the claims of verbal abuse against him) is debatable, but it’s clear that the internet uproar overturned this decision, and a lot of prominent media members are very upset about that.