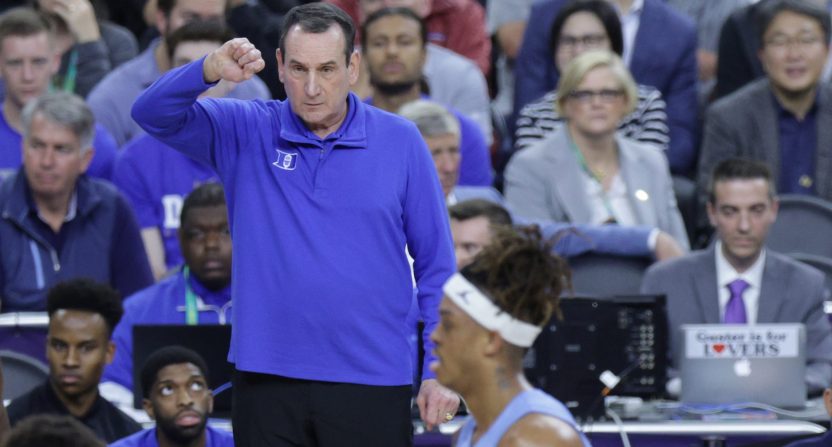 Duke Blue Devils fans and North Carolina Tar Heels fans were both hoping to be “Happier” on Sunday following the ACC rivals’ showdown in the Final Four Saturday night. But if you’re giving us “Two Points for Honesty,” the truth is that a certain laptop sticker in media row was, much like a “Satelite” in the sky, the “Center of Attention” instead.

As Mike Krzyzewski paced the elevated sidelines during his final game, viewers at home couldn’t help but notice a laptop behind him with a giant “Guster is for Lovers” sticker adorning it.

How old is this lap top to be holding a Guster sticker in 2022?! pic.twitter.com/wxih1dPKpO

The laptop in question belongs to CBS Sports college basketball writer Matt Norlander and, if you’ve been a college basketball fan for long enough, you know this isn’t a new phenomenon. Matt and his love for the alt-rock band Guster have been showing up on the sport’s biggest stage for some time now.

As for where the phrase comes from, according to That Music Mag, the band coined it while “Guster crossed the Virginia state line,” and has since been adopted as their slogan and used on stickers such as the one on Norlander’s laptop.

However, tragedy almost struck this year when Norlander tweeted that Coach K’s placement was drawing undue attention to the sticker, which was turning it into a distraction during the broadcast. Our worst fears were realized, that the sticker might not make it through the evening.

Folks: I’m a reasonable man, and I’m afraid Coach K’s seat of choice has caused a bit of a distraction on the broadcast. The Guster sticker is coming off at this next TV timeout.

??SCANDAL ALERT??@MattNorlander has a prominent "Guster is for Lovers" sticker on his laptop that was hilariously behind Coach K for part of the half. By the end of the half a monitor was moved in front of Norlander.

However, cooler heads prevailed and a well-placed monitor helped ensure that Guster will always be for lovers during the Final Four.

In-game adjustment. Got a TV monitor blocking it. THE STICKER STAYS ON. (But is now out of view.)

After the game, Matt appeared on CBS Sports HQ to talk about the laptop sticker, which went trending on Twitter. He also explained its origins, which came from wanting to make sure it stood out in a crowd of similar laptops so that it didn’t get stolen. Mission accomplished.

.@MattNorlander explains the speculation around his "Guster is for Lovers" sticker? pic.twitter.com/u0atsnBgIU

It should be said that, as much as you might have appreciated the laptop, no one appreciated it more than Guster themselves.

The band even got a shout-out on ESPN where the anchors did a little wordplay around their song titles.

Consider this as good a time as any to dig into the Guster back catalog, though if you’re a white guy who went to college in the northeast in the 90s, you’re probably well-versed in all of this already.