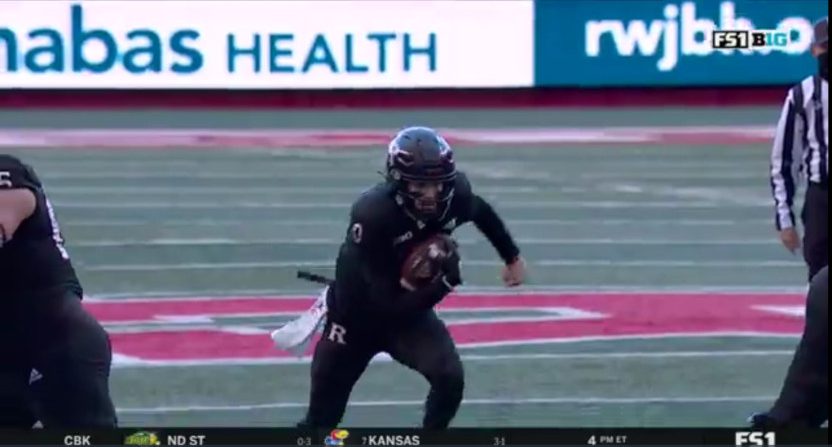 Matt Millen was providing color commentary on FS1’s broadcast of Penn State-Rutgers Saturday, but he wound up trending nationally on Twitter for something he didn’t explicitly say. In the fourth quarter, after Rutgers quarterback Noah Vedral ran on fourth down and only picked up three of the six yards he needed for a first down, Millen appeared set to say “He runs like a girl.” He caught himself just before that, but his criticisms of Vedral still brought him a lot of attention. Here are the clips in question:

Here are transcriptions of Millen’s comments across those clips:

“Yeah, he’s short. He doesn’t finish his runs. He runs like a…how should I say this? He’s not a running back. He’s a quarterback who happens to run. I want you to watch the end of this run, okay? Now, it’s wide open, watch him: see how he protects himself? His shoulder starts to turn a little bit. He’s not a runner. I mean, he can run, but he’s not a runner if you understand what I’m saying, he’s not a running guy.”

And that led to a whole lot of criticism of Millen, and to him trending nationally:

Here are some of those critical comments:

So Matt Millen came this close to saying Vedral runs like a girl. He stopped himself, but it was pretty clear his intention and as a woman, I find it pretty offensive @BigTenNetwork

He was one half syllable away from ending his broadcasting career. https://t.co/j8pGd4COQt

And there were many more. So while Millen managed to not quite say the terrible thing, and avoided explicitly joining the Cris Collinsworth Club, he still made waves with his remarks here.