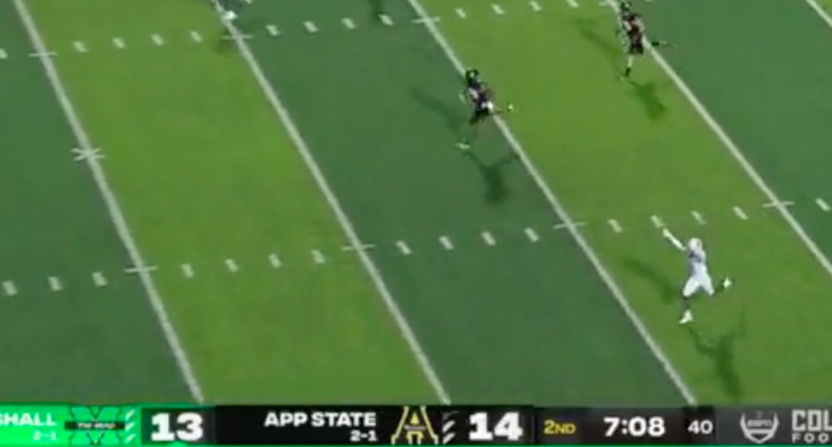 Camerapeople are a bit like offensive linemen. When they’re doing their job well you don’t even notice them but when something goes wrong, you’re suddenly very aware of them.

We’ve certainly seen plenty of fake-outs that fool not only the audience at home but also the person behind the camera during the broadcast. Hey, it happens. And it happened again Thursday night when Marshall ran an exquisite fake hand-off during a kickoff return for a touchdown.

Marshall football owes the cameraman a beer after doing this to him pic.twitter.com/ZbZ5dO2MRu

Appalachian State kicked off in the middle of the 2nd quarter following a touchdown drive when Marshall’s Rasheen Ali took the ball, made like was handing it off to one of his teammates, and then used the ensuing confusion to scamper to the endzone on a 97-yard-touchdown run. While the ESPN cameraperson initially took the bait like most of us, they eventually caught on and were able to recover in time to see the score as it happened.

A fake so good even the camera got fooled!pic.twitter.com/Wjv0KCrvsH

Marshall took a 30-21 lead into the fourth quarter and if they hang on to win the game, this kick return might end up making the difference. Of course, there’s always the chance they or App State has another trick play up their sleeve. We’re guessing that if that happens, the ESPN camera crew will be ready this time.