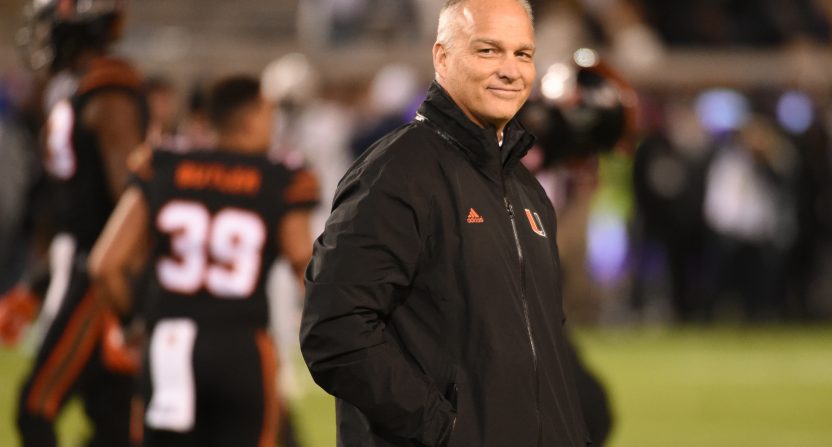 Mark Richt spent three seasons as a head coach in the ACC. He expects to spend plenty more as an analyst for their network.The fledgling ACC Network, a partnership between the conference and ESPN, announced this past weekend that Richt would join them as a studio analyst when their network launches in August.Given his history with the SEC as the longtime head coach of the Georgia Bulldogs, it might seem like a strange match to put Richt in ACC country. However, before he was at Georgia, Richt spent 15 seasons on the coaching staff at Florida State, nine of which were in the ACC. And he did spend the 2016 through 2018 seasons as the head coach at Miami. So if he needs to throw in an anecdote about the best places to get BBQ in Tallahassee or a good dive bar in Clemson, he’s probably got some answers.Of course, given Richt’s success on the football field (171-64 as a head coach), he also brings a solid pedigree to the network and studio that should help ground it before, during, and after broadcasts. He may still have some things to learn about the newer members of the conference like Syracuse and Pittsburgh, but he’s got plenty of free time.As for why he’d rather sit in the studio than stand on the sidelines, Richt told ESPN that he just knew following the Hurricanes’ 34-3 bowl loss last year it was time.

“It wasn’t like midseason or even a year in advance or whatever, but it came really when the season was over. I was thinking about the possibility of it and then, by the time the bowl game was finished, between myself and God and my wife, it was the right thing to do.”

He also said that he’s extremely excited for the opportunity and next phase of his career in college football.

“I’m really excited about this ACC Network opportunity,” Richt said. “And I think I can help the fans enjoy the game more and understand the game more, and it allows me to keep staying involved with this game of football. And it also gives me time to see our grandchildren more and our own children. So right now, I’m mostly focused on that.”

There’s bound to be a bit of SEC vs. ACC fun when it comes to Richt in this new position. In a statement, he referred to the ACC as “one of the greatest football conferences in America.” First of all, there aren’t that many, to begin with. Second of all, you just know there were plenty of people ready for Richt to say it was the best and then respond accordingly. They’ll be sure to keep listening once the network kicks off coverage in August to see what else he has to say as well.[ESPN]